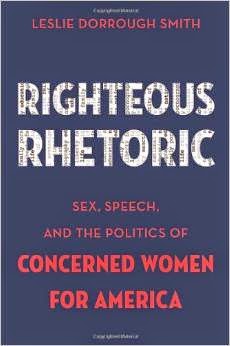 Leslie Dorrough Smith’s Righteous Rhetoric: Sex, Speech, and the Politics of Concerned Women for America offers an in-depth look at the rhetoric of Beverly LaHaye’s Concerned Women for America (hereafter CWA), using it as a case study to explore the role of what the author terms “chaos rhetoric” in American public life. Smith argues that while scholars of conservative American Protestantism (of various stripes) have tended to focus on “absolute, ordered, unshifting elements of the movement”—a perspective in line with how the groups see themselves—in fact, their positions on political issues shift constantly, masking internal contradictions and tensions that reveal a far more complex relationship between the CWA’s public rhetoric and the implementation of their agenda.  (6-7)
These shifts  constitute Smith’s chaos rhetoric, which she defines as “a type of declension speech that attempts to persuade an audience by stressing an imminent threat to a beloved entity (which could include everything from children, to liberty, to the nation itself).”(5) Chaos rhetoric presents its audience with a world defined by “threat, disorder, fear, and chaos.”(5) Having thus defined the term, Smith undertakes a prodigious analysis of CWA’s speech (primarily as it has appeared on their website), to demonstrate that CWA uses chaos rhetoric to attack and undermine liberal, feminist agendas, even as the specific targets under attack have changed. She demonstrates, for instance, how in the early days of CWA, they characterized liberal feminists as man-hating, bitter lesbians in order to oppose both the ERA and women in the workplace. By focusing on being against liberal feminists rather than on the content of the CWA, they were able to sidestep the fact that the CWA was largely staffed by women in the workplace. Similarly, when the demographics changed such that most conservative wives and mothers came to work outside the home, gay marriage could step into the role as a threat to the American family.

Smith teases out the constantly shifting relationships between religion and politics and the endlessly reformulated external threats throughout CWA’s numerous political campaigns. In doing so, she also argues that issues surrounding gender and sex are fundamentally at stake for the CWA, even when the political campaign is overtly about education, medicine, or the nation. She points out, for instance, that if parental control were really the concern with mandatory HPV vaccinations, CWA should be equally concerned about mandatory MMR vaccines. In the final chapter, Smith compellingly demonstrates that the CWA is not the only organization that employs chaos rhetoric; other conservative groups use it as do their opponents on the left.

While Smith draws on some compelling examples and a sound ideological and theoretical framework, her argument would benefit from a stronger chronology and a more solidly drawn social context to bolster her main points.  To be fair, Smith was not setting out to write a history of the CWA; however, those markers would have allowed her to trace developments and trends in the deployment of chaos rhetoric. As it stands, Smith’s argument exists as an interpretive frame outside of history, leaving the reader wondering: did chaos rhetoric change and adapt to certain social conditions, flourish because of particular political climates? Those hesitations aside, Smith’s project offers a new lens through which to read the intersection of religious and political discourse as well as many of the highly charged social conflicts of the late twentieth and early twenty-first centuries. Simply naming chaos rhetoric will heighten our awareness of this strategy and help us recognize it for what it is and Smith's work goes far beyond naming it, showing it as a powerful apparatus within American political speech.
Email Post
Labels: books Concerned Women for America gender and religion rhetoric Samira's posts sex