Violence, "the Religious," and Black Power

[Blogmeister editorial note: Congratulations to Matthew for finishing his Ph.D. at Northwestern and moving on now to a new position in the Department of Religion and in African and African American Studies at Earlham College in Richmond, Indiana. Congratulations, Matthew!]

"Instead of preaching the Cross for others and advising them to suffer patiently the violence which we sweetly impose on them, with the aid of armies and police, we might conceivably recognize the right of the less fortunate to use force, and study more seriously the practice of non-violence and humane methods on our own part when, as it happens, we possess the most stupendous arsenal of power the world has ever known."  Thomas Merton, Faith and Violence (1968) 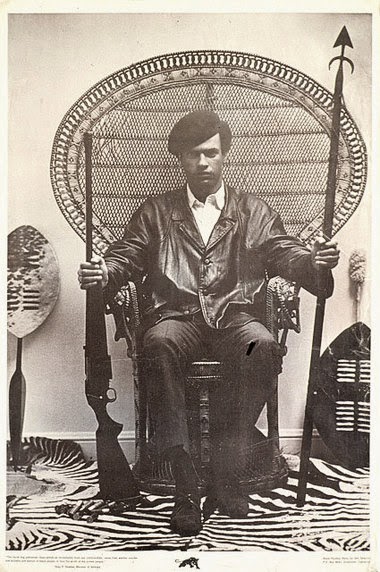 I want to return to a question I raised to my last post. Why is Black Power usually imagined to be essentially secular (in juxtaposition to the religiousness of southern civil rights struggles)?  I'd argue that one of the reasons many people at the time (and most historians since) characterized Black Power as such had to do with deep-seated assumptions about the nature of "religion" itself.  What marked Black Power as symbolically different than civil rights was violence, both rhetorical and actual.  The prevailing images of civil rights were tired women and tireless youth marching peacefully - and stoically enduring suffering - for freedom.  Meanwhile, the prevailing image of Black Power was black men donning black leather and brandishing guns.  (This is, of course, not a fair characterization of either.)

The problem with this second image, at least for some scholars, is that "religion" - one might say real religion, proper religion, or good religion - has long been presumed to be peaceful by its very nature.  To put this another way, "the religious" (people, institutions, ideas) is legitimate only to the extent that it does not threaten the stability of civil society.  When the religious enters the public sphere through violent means, it is immediately suspect insofar as its relative religiousness is concerned.
This suspicion was behind typologies of "good" and "bad" Islam in the wake of September 11, 2001 and it underwrote (still underwrites) categorizations of the Nation of Islam (NOI) as a political sect masquerading as religious - this despite the fact that Black Muslims were largely forbidden from overt political action or violent confrontation with the U.S. state in the first half of the twentieth century.  For a more sustained critique of this check out Sylvester A. Johnson's essay "Religion Proper and Proper Religion" in The New Black Gods (2009), edited by Edward E. Curtis IV and Danielle Brune Sigler.  Johnson notes how, for instance, the Federal Bureau of Investigation made sure to categorize black religious movements that resisted state systems of white supremacy as "cults" rather than real religious bodies, lest they be given legal legitimacy.  This distinction between "religion" and "cult" was not mere semantics.  Instead, it authorized the surveillance, incarceration, and suppression of groups like the Moorish Science Temple of America, Garveyites, and the NOI as enemies of the state.  For even more on policing the boundaries of "real religion," see Robert A. Orsi's "Snakes Alive" in Between Heaven and Earth (2005) and our very own Kelly Baker writing on "evil religion" here and here.

Right about now you may be asking why I opened this piece with an epigraph from Thomas Merton.  What does this white Catholic have to do with black revolutionaries?  An idiosyncratic question, I admit, but one that offers an angle (admittedly an oblique one) on the relationship between violence, "the religious," and Black Power  The fact that a Trappist monk wrote some of the most incisive, self-reflexive, and prescient words on Black Power (at least from a white man) may come a bit of a surprise.  When Merton is remembered at all, it is usually as a cloistered Catholic convert and proponent of peace, both personal and political.  Much like his contemporary Martin Luther King Jr., the more radical Merton is often forgotten (particularly when it comes to thoughts on racism, imperial power, and violence).  Nevertheless, before he died in late 1968, Merton published a collection of essays titled Faith and Violence.  Therein he wrote on topics ranging from nonviolence and the Vietnam War to Black Power and the death of God.

"Can faith and violence exist side by side?" the back cover queries.  Much more often than not, Merton replies.  His essays on Black Power offer a nuanced reading of the right of the oppressed to violent self-defense, the role of violence in the acquisition of power, and American Christian complicity in the violent maintenance of U.S. state power.  Many religious liberals responded to the rise of Black Power in the late 1960s with a sharp eschewal of self-defense as self-defeating.  They may have lamented the circumstances that produced "long, hot summer" riots, but they certainly rejected any claim that urban rebellion was an appropriate (religious) response to oppression.  Merton, on the contrary, refused to withdraw from black radicalism into blanket statements about the moral superiority of nonviolence.  Instead, he took a much more ambiguous stance:

"I do believe that the Christian is obligated, by his commitment to Christ, to seek out effective and authentic ways of peace in the midst of violence.  But merely to demand support and obedience to an established disorder which is essentially violent through and through will not qualify as 'peace-making.'"

As he witnessed the rise of Black Power, Merton had an eye for the irony and injustice inherent in claims that faith was incompatible with violence.  So too should scholars of American religion half a century later.
Email Post
Labels: Black Power Islam in America Matthew's posts religion and violence theory

Randall said…
A big congrats on finishing! I had no idea about this other side of Merton. Very interesting.

I think you're right about why we tend to think of "black power" as secular. Maybe as a kind of oppositional, secular counter to the CR movement.

This got me thinking about a very interesting essay I came across in Motive magazine while I was doing research at Concordia Seminary last November. Motive was published by the Division of Higher Education, Board of Education, Methodist Church, Nashville, TN. A range of activists and intellectuals published, including Martin Marty and Thomas Merton (on the failures of white liberalism). Andrew Young was on the editorial board.

Here's a link to the music/social critic Nat Hentoff's October 1964 piece in Motive: "The Search for Black Power." I was struck by the early use of the term and also be the force of the argument. An argument that would grow and become stronger in the coming years. May use this in class in the future.

Matthew Cressler said…
Thanks Randall, both for the congrats and for the article! I was not familiar with Motive and that essay looks like a must read - especially since I'm teaching a class on Black Power this fall. I'm also amazed that it was published in '64, a full two years before Carmichael famously called for "Black Power!" in Mississippi.
August 1, 2014 at 1:44 PM

Randall said…
Exactly, that was the strange thing about it. Was asking my colleague Joe Street about the use of "black power" that early. Apparently it appeared here and there, but didn't take on the larger array of meanings it would have after 1966.

Matthew Cressler said…
Yes, that was my understanding as well. I am sure there will be (at least) one post about the class this fall. We'll be starting in the antebellum era with David Walker, Maria Stewart, and nineteenth-century nationalists; spending some time with Garveyites, the Nation of Islam, and other forerunners of Black Power; exploring the many different (often conflicting) traditions of Black Power in the middle years of the 20th century; and ending with contemporary legacies (like hip hop and Black Studies). It is cross-listed with Religion and we'll be dealing with the messianic religious (under- and) overtones of black nationalism throughout.
August 1, 2014 at 2:35 PM