Take a Stand for Peanuts: Thinking Out Loud About The Irreverent George Norris

After finishing up my first semester of PhD work last December, I headed home to McCook, Nebraska for a couple weeks. McCook is a small town (pop. 7,652) in southwest Nebraska, roughly halfway in between Denver and Omaha. Its most famous resident for the vast majority of its 132 year existence has been George Norris, the legendary Ohio-born congressman who spent forty years serving Nebraska in Washington (1903-1943) -- thirty of those years as a senator.

It's difficult to get away from Norris if you're from McCook. Kids going through McCook's school system make numerous field trips to his old house, which is now run by the Nebraska State Historical Society as the Senator George Norris State Historic Site. Main Street in McCook is "Norris Avenue" and the central park in McCook is "Norris Park." All of this for a man who was a progressive Republican, a champion of liberal ideas that McCook's residents now generally repudiate, at least rhetorically.

For an earlier generation of liberals, Norris was a saintly figure. His stubborn opposition to "monied interests," his belief that the government could be a positive force for good in people's lives, his reputation for integrity, and the fact that he remained a steadfast progressive throughout progressivism's 1920s nadir captured the imagination of idealistic young Americans. In the 1950s, a panel of scholars put together by the U.S. Senate to determine the five most outstanding senators in American history voted Norris number one. In 1957, "John F. Kennedy" "wrote" Profiles in Courage, featuring Norris as one of his Courageous Eight U.S. senators.

Norris's greatest hits are indeed impressive. He opposed Joe Cannon, J. Edgar Hoover, American entry into World War I, the Espionage Act, and the poll tax (this did not come until the end of his career). He championed the TVA, Norris-LaGuardia Act, 20th Amendment, Rural Electrification Act, and Nebraska's Unicameral. And perhaps most impressive of all, he used an eight-foot spider labeled "Wall Street" as a prop for a speech on the Senate floor
But what does all of this have to do with American religious history?

Everything, if you were to ask Norris. "My religion and my politics are one and the same," he wrote in his autobiography, arguing that both were merely methods to bring about the welfare and happiness of people. 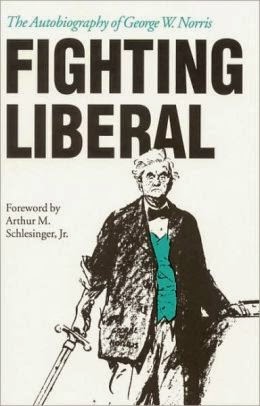 Yet, in Norris's autobiography and in the definitive three-volume biography of Norris, not much space is given to religion (or nearly ALL the space is given to religion, if we take Norris at his word). From what is included, it appears that Norris was raised by a Bible-believing mother who made sure that the family read scripture for hours each Sunday. However, Norris began to doubt the truth of his mother's religion after reading John William Draper's The History of the Conflict Between Religion and Science and Deuteronomy 23:2. Although he maintained a lifelong belief in a creator God, he rejected Christianity in its organized forms and he never joined or regularly attended a church.

Norris's biographer, Richard Lowitt, described Norris's philosophy as one in which "His country was his idol, his conscience was his master, and humanity was his God." And Norris's basic creed (according to Lowitt) was expressed in Norris's favorite poem, "Abou Ben Adhem." The message of the short poem was simple: you love God by loving people.

Although Norris took no interest in formal theology or religious labels, it seems to me that Norris could be described as something of a plainfolk, theistic humanist. Perhaps "red letter" would be a good adjective as well. Like many others of his time who rejected organized Christianity (including the religious radicals discussed by Dan McKanan), he held the "lowly Nazarene" in high esteem. Yet he didn't quite fit in with McKanan's radicals -- partly because always maintained the trappings of nineteenth-century evangelical individual morality, and partly because his aim was always to preserve and improve the capitalist system. As for the more moderate social gospelers, he was somewhat similar to them in his equation of true religion with social/political action for the betterment of humanity. But he was never connected with any Christian institution or organization, nor did he see himself as part of a Christianizing project.

These reflections on Norris's religion were on my mind last December as I was driving down Norris Avenue, on my way to the Senator George Norris State Historic Site. Just hours before, my mother-in-law (who happens to work at the George Norris house) told me that there was an old hymnbook, once belonging to Norris, that had been scandalously edited. Out of curiosity I immediately arranged a trip to check out the impious songbook.

(Pictures below were snapped with my iPhone. Many thanks to the good folks at the Nebraska State Historical Society and especially those involved with the Senator George Norris State Historic Site for giving me permission to post the pictures here).

The title of the songbook, first published in 1876, was Songs of Faith: A Collection of Sacred Songs, Especially Adapted for Devotional, Revival and Camp Meetings 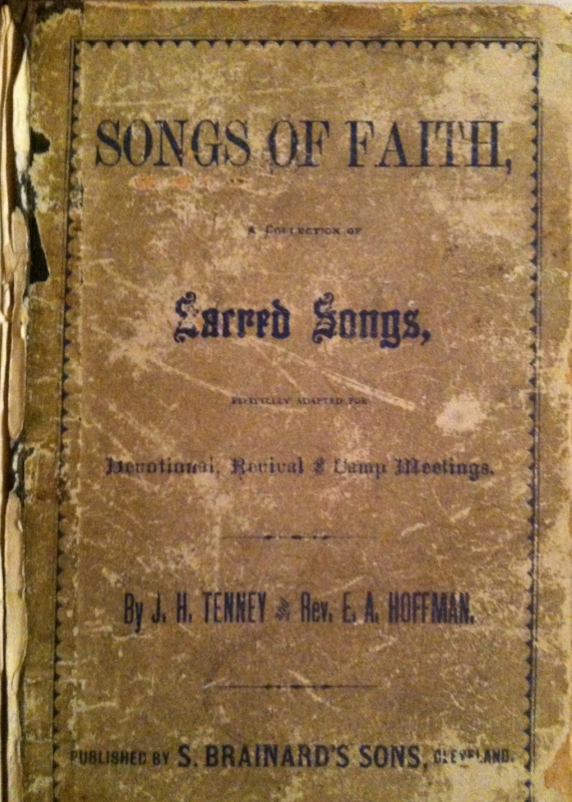 As I flipped through the pages, it quickly became apparent that nearly every hymn (usually the title) had been altered in some irreverent way.

Some of the alterations were nonsensical:


Sleeping in chapel was a popular theme:

As was chasing girls:

My first inclination was that this sort of creative editing was something that college kids would do. These two hymns validated my instinct:

H.B. Brown was the president of Northern Indiana Normal School at Valparaiso at the time that Norris attended the school (the school is now known simply as Valparaiso University -- its Lutheran affiliation did not begin until the 1920s). Since Norris graduated in 1883, and the hymnbook was published in 1876, it seems likely that the book was used in the mandatory 8:30 AM chapels that were part of campus life when Norris attended. It's not too difficult to imagine college kids overcoming their boredom by creatively adjusting the sacred songs.

Originally, I thought that the lighthearted mockery in the hymnbook was nothing more than entertaining proof of Norris's rejection of organized Christianity. But as I thought about it, my understanding of what the book probably meant began to change. I began to see that, in Norris's view at least, the book was not sacrilegious, but sacred.

Check out this self-referential alteration, for example:

While it is entirely possible that Norris crossed out "Jesus" and wrote his own last name, it's also possible that Norris might not have been the sole editor of the book (although given his reputation for song parodies, he probably played an important role). If editing the book was a communal affair, then the significance of the book becomes tied in with the relationship Norris had with his co-editors.


There was also this edited song title:

The "Hyde" refers to Charles Hyde, a fellow student at Valparaiso in the 1880s and a fellow member of the Crescent Literary Society. Every Friday night the Crescent joined in with other campus societies for contests and frivolity that involved speeches, essays, debates, and music.

According to Norris's autobiography and Lowitt's biography, within the Crescent a friendly but intense rivalry developed between two factions, one led by Norris and the other by Hyde. The two men campaigned for the presidency of the Crescent, with Hyde sending Norris to defeat by one vote. On the night of the thrilling election, Norris's supporters gathered together to make sense of their loss. They agreed that evening to form an organization -- the L.U.N. -- for which they drew up a written constitution and formed a set of rules. Included among the rules: no member was allowed to speak the name of the L.U.N. to any non-member; the club would meet every single year for the rest of their lives; no new members would be allowed to join the L.U.N.

The club quickly became a campus sensation as non-members tried to decipher just what "L.U.N." really meant. Lowitt claimed that it stood for "Loyal United Nine." Norris himself, although he devoted a chapter to the club in his autobiography, never revealed the actual name. But he did take pleasure in the name given to the club by his fellow students at Valparaiso: "Lunatics Under Norris."

Amazingly, the members of the club were true to their word. From 1883 until 1941, despite moving to disparate locations across the country, the L.U.N. met annually (by 1941, the club was down to only two living members). At each annual banquet, a formal program was printed and members gave speeches that recalled memories from their days in Valparaiso. Norris explained the importance of the club in his autobiography: "These reunions of L.U.N. added greatly to our lives, made us all better men, better citizens, and better fathers. The friendships formed extended to our families. And beneath the solemnity, and the companionship, there was always close to the surface a bubbling spirit of fun."

Reflecting on the "blasphemous" hymnal with this background in mind, it becomes clear that the modified words invested the old pages with new meaning for Norris, telling a tale of shared experiences: the overbearing college president, the drudgery of mandatory chapel, the youthful thrill of romance, the Norris/Hyde rivalry. To Norris, the book was less about his mockery of the Christian songs than it was about the friendship and companionship that he formed with his fellow L.U.N. members and the college memories that were (in Norris's words) "sacred emblems of the past." Those college memories were reinforced, sacralized even, through the annual meetings of the L.U.N.

I can't help but think that the altered songbook, irreverent as it may seem to some Christian believers, was at least as sacred to Norris as a pristine edition would have been to anyone who merely sang along solemnly to the words. And I can't help but think that the book represents something more -- one part of Norris's lifelong process of forming a personal, difficult-to-classify ("none"-ish?) faith of his own, a faith in which "humanity was his God" and in which, sometimes at least, the old wine skins worked just fine for the new wine.
Email Post
Labels: irreligion nebraska putz religion and liberalism religion in the progressive era