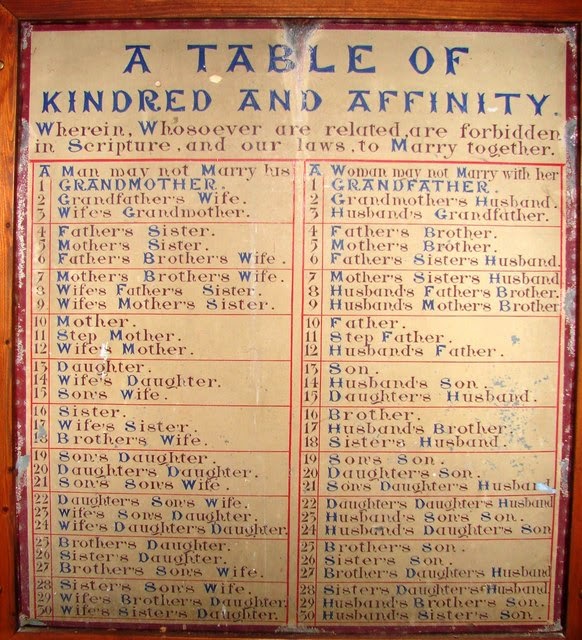 historicizes the incest prohibition. This is a tough, tough subject, and he succeeds admirably. In the nineteenth century, theological, legal, literary, reform, and physiological discourses surrounding incest were in transition. The religious proscriptions of Leviticus and the Anglican Church's Table of Kindred and Affinity (1563) diminished in power and persuasiveness, and they had yet to be replaced by eugenic theories of reproduction or the taboos developed by the fields of anthropology and psychology. Further, as Connolly argues, incest was inseparable from constructions of the new middle-class, sentimental family. At the center of nineteenth-century American society, the family nurtured the nation's citizens, and offered a moral refuge in an increasingly mobile, capitalist society. Even as it offered protection,  the nuclear family's affectionate domesticity facilitated and even encouraged incest. Families had the contradictory responsibilities of regulating individual desire and providing for its expression. Within the family, according to Connolly, incest placed necessary, if shifting, limits on the individual.

Readers of this blog will be especially interested in Connolly's chapter on "Theology," which covers a debate known as "the marriage question." Involving the Presbyterian, Congregational, and Dutch Reformed churches, clergy and their parishioners debated the restriction on husbands marrying their (deceased) wife's sister (a wife marrying her brother-in-law did not seem to cause as much outcry). In the early republic, states began narrowing the list of prohibited relationships. In 1785, for example, Massachusetts removed the wife's sister from their marriage restrictions. Furthermore, American notions of individual liberty, particularly marital choice, began to clash with religious proscriptions. Charged with incest for marrying his wife's sister, Presbyterian minister Archibald McQueen protested the church's demand that he "separate myself from the woman whom I have chosen as my wife" (59) as disruptive of stable and virtuous families. In their defense of the marriage prohibition, theologians invoked the specter of a sexualized extended family, in which every member was a potential sexual partner: "Would not every family become a school of abominable impurity, where the youthful mind would be initiated in the worst mysteries of vice, and long before it obtained years of discretion, turn out a giant in profligacy?" (71). For many church leaders, the Table of Kindred and Affinity was the only bulwark against a sexual free-for-all, but Americans rejected such infringements on their liberty.

Rather than the more familiar "liberal individual," Connolly uses the term "liberal subject" to recognize the constraints, including the incest prohibition, that liberalism placed on individuals. Connolly further clarifies that "the liberal subject, more often than not, was white, male, property owning, and heterosexual" (15). Most of the literature on incest was written by men, and presumed a rational male subject capable of self-control. Given women's growing moral power in the family, however, it is not surprising to find them as both objects and actors, asserting their own definition of appropriate male behavior. Connolly gives examples of women charging their fathers and stepfathers with forcible sex, but, due to its history as a marriage restriction, the law of incest implied consent rather than rape. As a result, men convicted of incest faced a milder sentence. In a chapter on "Slavery," Connolly examines how abolitionists like Lydia Maria Child associated incest with the "disordered" (171) kinship ties in slavery. Race and slavery provided a cover for slaveowners' incest with their mixed-race daughters, but enslaved women (and men) claimed kinship with whites to prevent such abuses. These examples also show the confusion and exploitation created by the changing definition of incest, as Connolly demonstrates, from a problem of marriage to one of sex, from affinity to blood.

Connolly's interests overlap with John Lardas Modern's Secularism in Antebellum America in some of his subjects (Melville, phrenology, Lewis Henry Morgan) and themes (the interdependence of religion and secularism, the illusion of agency), but his focus on incest reminds us of the centrality of the family to nineteenth-century American history. According to Connolly, religious understandings of incest did not disappear, and even as blood became the supreme definition, blood assumed new moral implications for the health of children and the nation. I know I'll never be able to think about the nineteenth century in the same way again.