I came of political age in the 1980s, attended my first political rally against the Reagan Administration's policies in Central America, wrote op-ed's for the late great L.A. Herald, and even supported the Sandinista government in Nicaragua with my modest college-age wages.  With the stories of the Central American children crossing the border and being met with invective, insults and generally appalling behavior, my mind went back 90 years, to more appalling behavior, perpetuated by U.S. officials under the guise of public health--the fumigation of Mexican workers and immigrants, some of those crossing back and forth were Pentecostal missionaries, this is one of their stories. I think it demonstrates that the regulation of Latin American peoples, whether 90 years ago or today, is fraught with danger, colored by nativism, and usually anything but the idealized site of refuge where people fleeing violence can find relief.


In 1924, Henry C. Ball, Assemblies of God missionary nearly missed his train from Eagle Pass, Texas to Mexico, and wrote a letter to complain. Ball, who had just witnessed the fumigation process at the border, said nothing about that indignity--because it did not involve him. He was not gassed or forcibly stripped searched. He complained of being late for the train and of the inconvenience of carrying his gospel tracts and organ in one heavy suitcase, about having to eat with tortillas, about the dirt floors--his feelings of superiority were evident.

Ball, who had crossed the border many many times before, and no doubt saw the fumigation stations, had nothing to say about this humiliating scene, none of the Pentecostal missionaries who worked on the U.S. Mexico border seemed to be concerned with this, because it had no direct bearing on their evangelistic endeavors. 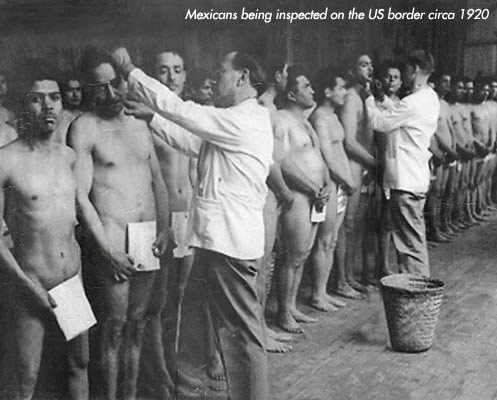 Ball received his certificate of fumigation as he was crossing border from Eagle Pass, Texas into Mexico. Thousands of Mexicans had to undergo from 1917 through to the 1950s to receive theirs. Along with the strip searches came acid baths, gas baths, and fumigation with toxic chemicals such as DDT and the notorious Zyklon B.  Eagle Pass was one station of several throughout Texas that served as fumigation stations through the 1950s.

Fellow missionary F.C. Hale, though, saw something divine in Mexican migration. As a Pentecostal, saturated with premillennial fever, he saw these migrants as a precursor to the Second Coming--but to be fair, Pentecostals saw almost everything as part of that premillennial schema. Hale commented “Those who know of the superstition of the Mexican race will appreciate what a wonderful victory has been won. These poor people had been brought up to worship images and know nothing of a living God… God is sending them across the border to us in multitudes….We must gospelize these hundreds of thousands of heathens whom God is thrusting into our midst.”  This is one of the rare moments where immigration was actually interpreted as divine. In examining the humanitarian crisis at the border over the last month, one wonders where that prophetic imperative has gone?

Somewhere along the mid to late 1930’s there came a slight change in the tone of these neo-colonial relationships between Ball and his Mexicano brethren, he started sympathizing with their plight. Ball witnessed the Repatriation, and that had an affect on him like fumigation never did.  Ball’s missionary missives back to headquarters, constant in their plea for money and more workers, noted that over 200,000 have: “left the states and returned to Mexico, not that Mexico is better off than we, but being able to get work here and having homes or land in Mexico, they return home in hope of getting by in some way. Along the border the Mexicans have always been of the laboring class. Now for over a year thousands of Mexicans have been laid off to give their work to American citizens. Even American born Mexicans have been discriminated against most unjustly, they are as much American as we.”

No one would ever accuse Ball or Hale of being theological or political liberals, so it is striking that these men, who did not have a theological worldview that allowed for Mexicans to be anything other than "Romanists" who needed salvation and its assumed civilizing effects, actually began to see Mexican Americans and Mexicanos as people. It is a sobering reminder of how completely off the rails the discussions of immigration are today when children become fair game for the kind of treatment they've received. This is part of a historical pattern that border crossers from the South have dealt with since they were written off as “illegal” in 1917.

If you were shocked that a U.S. Congressman from Georgia was spreading horrendous rumors that the mostly women and children, nearly 60,000 of them fleeing horrific violence and near anarchy in Central America, were coming to the U.S. to spread the deadly Ebola virus, you are unfamiliar with the centuries old narrative that held that Latin Americans crossing the border were: disease-ridden, criminals, subversives, and hostile to the “American” way of life.

For some though, adding a human dimension to this story is a waste of time, because they have already succumbed to the fast and furious paranoia of incoherent conspiracy theories that buttress the most frightening reality of all. For a significant portion of the white population, they feel like they’ve lost their country.

Ironically, religious groups, of all kinds, conservative evangelicals, liberal Protestants, Jews, Catholics, are all in on the conspiracy. Religious-run refugee resettlement agencies, who, according to the Tea-Party affiliated website, Refugee Resettlement Watch stand to gain millions of dollars in federal contracts by resettling this new rush of refugees.  This same website claims to serve as a watchdog for refugees from the Middle East, since part of the paranoia and xenophobic character of U.S. history has had its roots in the fear of contagion: the new contagion is the plan to bring Sharia law to the U.S. through the importation of refugees, immigration and rising birthrates among U.S. Muslims. The contagion in the case of Central American kids is a multiplicity of imagined threats that have worked for over a century to ensure that immigration, detention and deportation policies against Latinos/as are viewed as the only to America’s economic, political, social, cultural, and public health concerns.

The constant steady shout to go back home, the stares, the often mis-spelled signs, the detention facilities are scenarios Latino/a immigrants have faced for over a century and they show no sign of abating. The narrative of the lost land, for some, only goes one way. Losing America after all, is much more important than losing Mexico, El Salvador, Guatemala, or Honduras.  The late 19th century depiction of an America morphing into an octopus, the Colossus of the North, is the shadow of a security state they know all know too well.

Today’s humanitarian crisis is part of a larger narrative of the “lost land,” a sense among some in the U.S., that they are incapable of turning back the demographic tide. The first time some people hear Spanish instead of English and feel the twinge of being outside a conversation, coupled with the seeming attention paid to Latinos via various media:  accommodating the need for Spanish language ballots, books, and bibles-- is all too much. Losing one’s country, one’s sense of what America was and is, that narrative runs strong through the corridors of perceived powerlessness in this country.

The loss of America is the narrative that keeps nativism alive, feeds its ambitious political agenda, and attempts to keep the ever creeping demographic reality at bay, that within the next two generations, and here now in California, there will be no white majority. That is the fear, that this exceptionalist narrative of America,so carefully constructed and manicured for centuries, will cease to be.

Anonymous said…
Excellent article outlining the historical problem of immigration in the US. It demonstrates the problem as one based in fear by highlighting the historic fearful reactions against immigrants and the perceived potentiality of patriotic americans to loosing land, customs and culture.
August 1, 2014 at 10:38 AM