Rich Churches and the Social Gospel 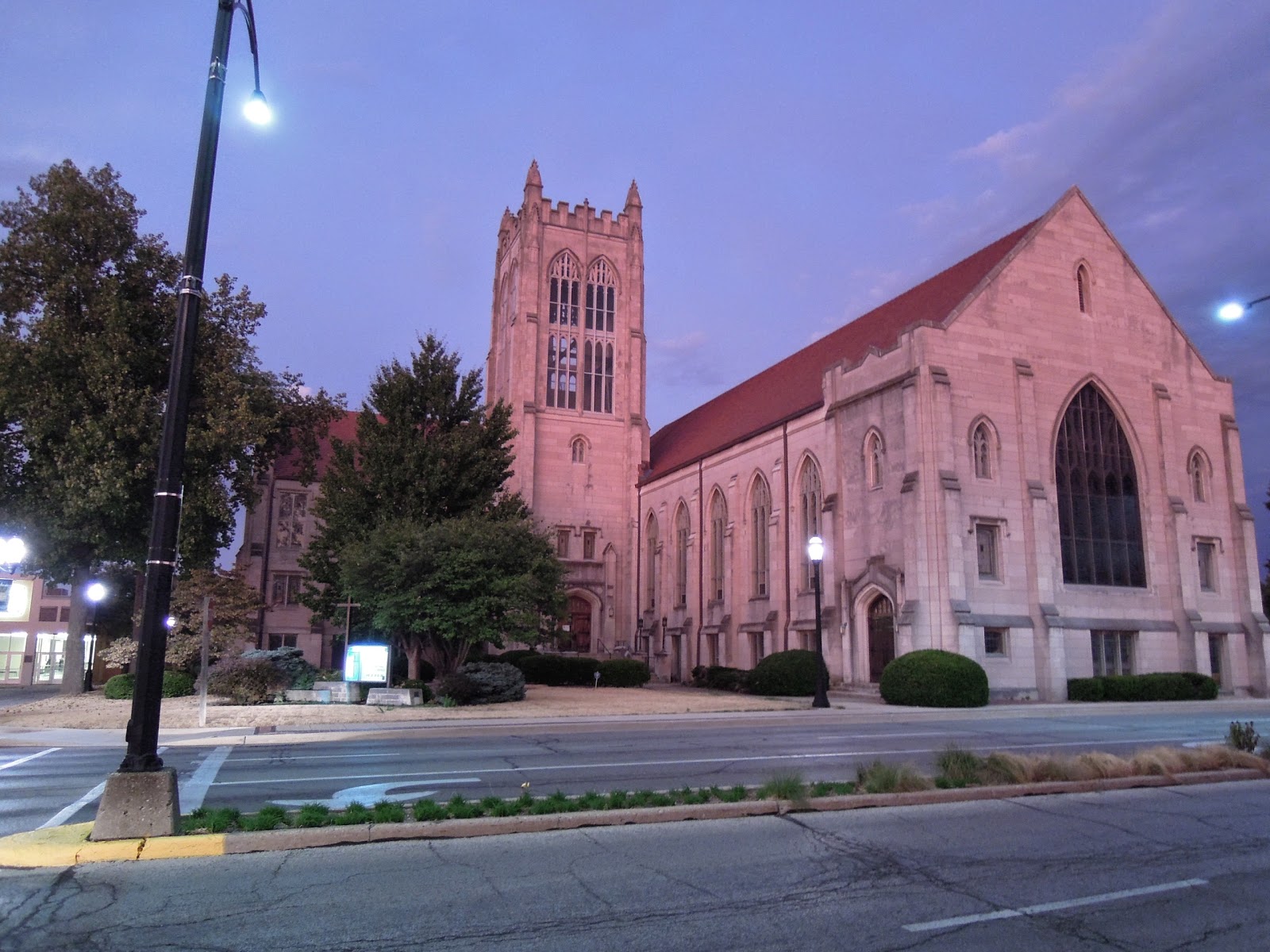 In my first graduate research seminar, many years ago, the professor explained the ground rules of the course. "You can study almost any group of people you want," the senior scholar said, "as long as they're poor and working people. No rich people." People laughed. I was confused. I knew I had enrolled in a social history course, but this was still surprising to me.

Numerous, huge, substantial, ornate churches built in the early twentieth century occupied street corner after street corner in my town of Urbana, Illinois (like the one from my former neighborhood, pictured here). I wanted to know how these churches got there and how they were still around, but nobody seemed to find that an interesting topic of conversation (inside or outside of the graduate classroom). I lacked a lot of knowledge on the social history of rich people, especially Protestant rich people in the early twentieth century, yet it seemed taboo to ask questions about them. How are we going to understand battles over wealth distribution in the United States, I wondered, if we refuse to study the rich? 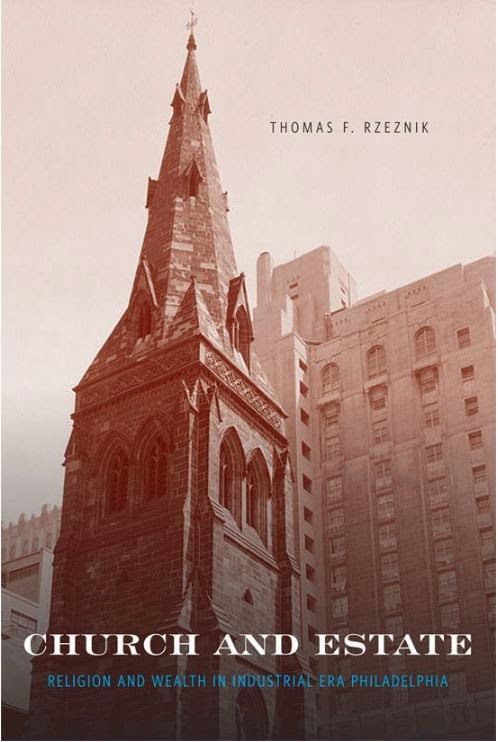 Apparently I was not the only person wondering this in the last ten years. The field of Labor and Working Class History has always included within it a consortium of scholars more interested in the "History of Capitalism," but this conversation has largely grown into its own field over the last several years. One might say that the excellent work of historians Bethany Moreton, Darren Grem, and Darren Dochuk are all in this conversation. Social histories of the poor are still alive, but more labor historians are admitting that studies of the rich are useable--even if do they present dangerous temptations to overemphasize the rich in discussing causality within grand narratives of American past.

Thomas Rzeznik's 2013 Church and Estate: Religion and Wealth in Industrial Philadelphia is an excellent example of how much we can learn about class relationships--anxieties, goals, aspirations, and jockeying for social and economic position--from a study focused entirely upon the rich. Rzeznik reads between the lines of denominational records in Philadelphia and teaches us about how denominations can serve as a source of social cohesion and consolidation of social capital.


Rzeznik explains the cluttering of the early twentieth century urban landscape with palatial and ostentatious churches in stunning and deeply satisfying detail. He argues that these churches grew out of the twin engines of a philanthropic sense of Christian responsibility, and a simultaneous sense of social ambition. Many of these churches were funded by and designed for wealthy patrons and their admirers. Wealthy patrons thought they did their denomination, and God, a service by bequeathing a large church to the network of extensions in new neighborhoods. Of course, they also gained for themselves a name as a Christian patron, and a meeting place within which to interact with other wealthy people. But, this noble status and responsibility for philanthropy was also a circular engine.

New churches, and especially Episcopal churches, both created and solidified the social group known as the Protestant upper class. Catholic and Presbyterian and Quakers in Philadelphia bequeathed money for the sake of building large and expensive churches. But, on the spectrum, Catholic Churches granted donors much less power over the use of those donated fortunes, especially as compared to Episcopalians. As wealthy Philadelphia Quakers became aware of the social capital in Episcopal churches, and the social capital available in becoming Episcopal, many married into the new Episcopal class and converted--even when this meant defying the core Quaker doctrine of shunning ostentatious worship environments. The Episcopal church, Rzeznik convinces us, played a large role in creating the Philadelphia upper class. Churches, overall, he suggests, played a large role in creating the Gilded Age upper crust.

As far as I'm concerned, this terrific close research on church patronage and the building of palatial, 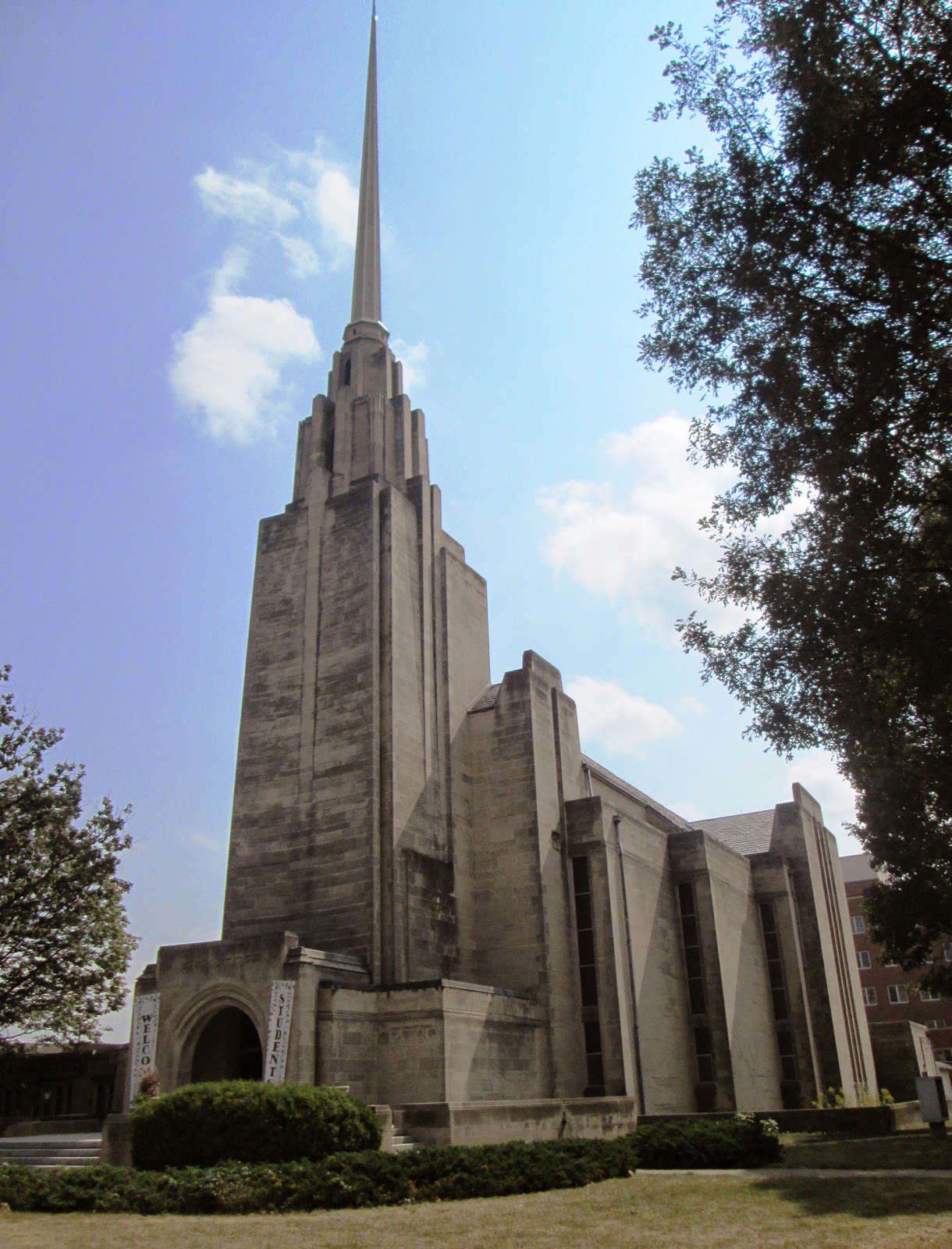 gothic cathedrals would be enough to make it a worthwhile read. Name a prosperous town in this country that was around in the late nineteenth  and early twentieth century, and I bet it has at least a few huge and exquisitely built cathedrals still standing, all of which were built by wealthy Christian patrons during that period. Here in Champaign-Urbana, we have still standing palatial stone edifices designed for Episcopal, Methodist, Presbyterian, Baptist and Catholic  churches and their communities. (The one pictured here is of the Wesley United Methodist church on the campus of the University of Illinois.) And, this is not only on campus, but in the town centers of Champaign and Urbana as well. As Rzeznik notes of Philadelphia, not all of these donated houses of worship have lasted through the twentieth century. Many have been bequeathed to cities and converted into municipal buildings and schools. However, a surprising number have remained. These relics of an era gone by deserve a history, not even because many are still the most majestic pieces of architecture on their street, and often in their city.

Yet, what makes this book excellent is that it's about more than this. It's also about the Social Gospel, which grew from the social and cultural earthquake of the 1910s which erupted from at least two causes. First, rabble-rousing academics and men of the cloth (as well as lots and lots of workers) attacked wealthy Protestant patrons for hypocrisy in their supposed philanthropy, and some ministers agreed and joined with workers in solidarity. Churches were fractured, and some men of the cloth created their own organizations in order to support workers' own efforts at alleviating poverty. Ugly battles ensued over the extent to which patrons really disregarded the poor. And, two, many wealthy Protestants got cars and moved to the suburbs, and the urban churches began emptying.

My usual genesis point for the rise of the Social Gospel movement is this dual phenomenon of massive church emptying and a number of lone clergy who were vocally sympathetic to the poor living and working conditions of urban wage earners. When I looked at this history from below, I saw a sudden and gaping vacuum of Protestant power in urban centers, and then a decade of revivals to fill this vacuum. Rzeznik's work, however, fills in this picture considerably. He shows us that wealthy patronage of Christian institutions (schools, hospitals, and especially churches) was a major means through which institutional Christianity was built in the early twentieth century. The twin goals of serving one's community and solidifying one's status as upper class may have been indistinguishable in the Gilded Age. We're not calling anyone altruistic. But, this pattern was nonetheless a consistent Christian ethic of public devotion.

The first generation of the automobile (around 1910), including both middle class and poor people, protested against this old Christian ethic. They characterized the fact of extremely wealthy clerics and extremely expensive churches as selfish, ostentatious, and deliberately scheming. In many respects, of course, they were right. But, they also did not completely understand where their adversaries were coming from. And perhaps, worst of all, many wealthy patrons by the 1910s and 1920s also did not really remember, or care to keep alive, their parents' philanthropic (albeit self-aggrandizing) commitments to their communities. By the 1920s, many of these "mainline" Christian heirs of industrial fortunes (and the term mainline was developed to describe the Philadelphia suburbs) quit their investment in their communities. Instead, as Rzeznik brilliantly points out, many invested their fortunes in trust funds, life insurance, and conspicuous consumption.

I highly recommend this book to anyone interested in the history of wealth and the Social Gospel. I want to read more histories of the upper classes with so much careful attention to the construction of classes and the goals which united them. We need this context for our courses. We need this context for our well-educated executives who want to read on their commutes to jobs in the finance sector. Narratives on the making of the upper classes are powerful narrative devices, and often very relevant to the many college students who grew up in suburbs. Most of all, we need to recognize these studies as social history.
Email Post
Labels: books janine's posts religion and class religion and wealth

Anonymous said…
Excellent post! I'm looking forward to reading Rzeznik's Church and Estate for comps. While it's not American religious history one book I would recommend wealth and religion is Peter Brown's recent Through the Eye of a Needle: Wealth, the Fall of Rome, and the Making of Christianity in the West, 350-550 AD.
June 10, 2014 at 5:22 PM

Janine Giordano Drake said…
Thank you! Maybe we should make lists of books to use in covering broad religious studies themes within Western Civ I and II classes. (And also, Global History courses.) I'd love more suggestions like this.
June 11, 2014 at 10:13 PM

Janine Giordano Drake said…
Thank you! Maybe we should make lists of books to use in covering broad religious studies themes within Western Civ I and II classes. (And also, Global History courses.) I'd love more suggestions like this.
June 11, 2014 at 10:13 PM