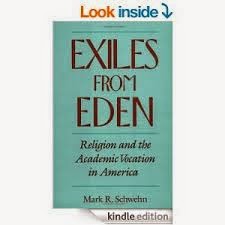 Earlier this month a host of former Lilly Postdoctoral Fellows, as well as supporters and friends of the Lilly Fellows Program in the Humanities and the Arts, gathered at Valparaiso University for a reunion and conference devoted to a reconsideration of outgoing VU Provost Mark Schwehn's 1993 book, Exiles from Eden: Religion and the Academic Vocation in America.  Both the Fellows program and the book have had significant impacts on the world of church-related higher education.  After the conference I asked two of the American religious historians in attendance, Bob Elder (who will be returning to Valpo as assistant professor of history this autumn) and Matt Hedstrom, to reflect a bit on those legacies.  You'll find what they had to say below the fold.


HC: What do you see as the most important legacy of the Lilly Fellows Program to this point?

BE: I've always been impressed with the wide variety of institutions represented in the LFP and that was on full display this past weekend. The LFP is a unique space where those institutions, some of which have quite different approaches to the educational project, can come together and discuss what it means to be a church-related institution of higher learning. Over the years, I think the different LFP programs, the postdoc, the annual conferences, and now the graduate fellows program, have produced an overarching conversation about the relationship between faith and learning that brings a lot of different viewpoints to the table, which is unusual and didn't really exist before the program.

MH: The LFP is one of the few places that engages early career scholars in deep conversation about the meaning of a humanistic education. We have seen a variety of defenses of the humanities published in recent years, including some really excellent work by scholars like Andrew Delbanco and Michael Roth. But that conversation can seem far removed from the concerns of those trying to secure tenure-track jobs and make their marks in their disciplines. The Lilly Fellows Programs allows early career scholars the time to think in a sustained way, with the resources of the Christian tradition, about the big questions:  what does it mean to be educated? why and how do we do this? Whether one teaches at a church-related school or not, these questions need to be considered by all of us who teach—now more than ever.

HC: What, in your view, were the most important issues discussed at the Exiles from Eden conference?
BE: I think the challenges and questions posed by the rise of contingent labor in higher education stood out for me. The panel on this issue raised some great questions, particularly about the viability of the notion of "vocation" when applied to adjunct work, and some great answers from faculty working in contingent situations and outside the 4-year college paradigm about how, as Christians and alums of the LFP postdoc program, they thought about their work.

MH: The relationship of contingent faculty to the category “vocation,” as Bob mentioned, was certainly the matter that most sharply connected the current state of the academy to the heart of the LFP project. A number of folk at the conference, myself included, also want to break down the secular-religious divide, and think about ways that moral concerns about human rights, social justice, and sustainability—to name only the most obvious—animate much of so-called secular academic life. Abstract, disinterested Wissenschaft is far from the only game in town! Thinking about the moral side of secular academia will allow us to find more points of contact between the Christian scholarly vocation and what happens everyday in a wider range of academic settings. We need to think especially clearly about the relationship, sometimes complementary and sometimes antagonistic, between these moral concerns and the intellectual virtues that Schwehn so elegantly presents.

HC: Given the rapidly changing climate of higher education, what do you see as the major challenges ahead for the LFP and for those who sympathize with the vision that Schwehn articulates in Exiles from Eden?

BE: The main dichotomy that Schwehn focused on in Exiles was between research institutions and teaching institutions, especially church-related colleges and universities. There was a lot of discussion this weekend about whether the term "exiles" still properly applies in the way Schwehn meant it twenty years ago (referring to PhDs educated in large research institutions but "exiled" to small, religiously affiliated teaching colleges). Today it's hard to regard anybody with a tenure-track job as an "exile" in any meaningful sense, both because of the terrible job market and because faculty at traditionally teaching-oriented institutions are increasingly engaged in research. Perhaps more significantly, in his response to some of the panels Schwehn identified the main problem facing institutions such as those that comprise the LFP, which is that in an educational marketplace focused on quantifiable and quick results these sorts of institutions have to convince potential students and their parents to invest in an intangible good (a liberal arts education at a religiously affiliated college). That struck me as the next big challenge for the LFP.
MH: We need to rally in defense of the liberal arts—in defense of education for thoughtfulness and meaning, for living the fullest possible life. Politically, an alliance between Christians and other religious folk, on the one hand, and secular academics who care about a liberal education, on the other hand, is vital. This has to be an all-hands-on-deck effort, and the LFP program is a site, perhaps uniquely so, where religious and secular academics, who are often suspicious of each other, can come together. There are powerful forces afoot that want to turn American higher education for the masses into narrow job training (the sons and daughters of the elite will always get “real” educations in privileged settings). We need to defend the democratic and human value of the liberal arts with every resource we have.
Email Post
Labels: conference recap Heath's posts humanities interviews religion and higher education

ShirleyHS said…
This is an excellent summary of salient points at the conference. I agree that the book continues to be relevant even though conditions in the academy have changed markedly since 1993. The call Matt makes at the end for the biggest possible tent makes great sense. Thanks, Paul and Bob and Matt.
June 20, 2014 at 6:34 PM