Skip to main content
Labels
Posted by esclark May 25, 2014 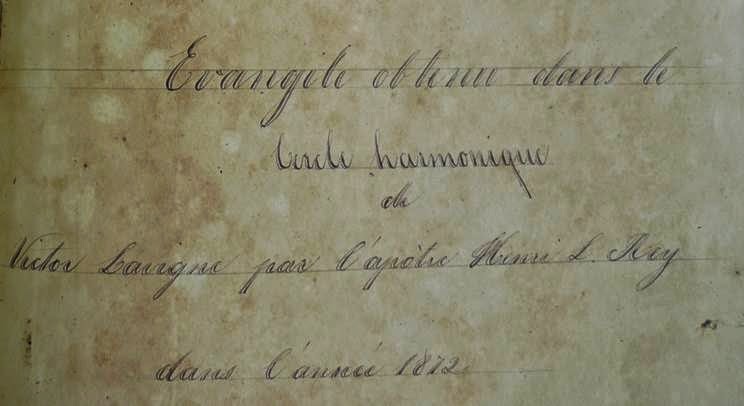 On a Friday evening in 1872 a group of New Orleanian Afro-creole men met at the home of Henri Louis Rey. They sat around a modest wooden table with a simple goal: make the world a more egalitarian place. Rey began the meeting by opening a large register book and picking a hand-written essay to read from and then further discuss. The essay had been communicated to them by the spirit of Abraham Lincoln, or maybe this week Rey picked a message from Robespierre or maybe Toussaint L’Overture. Regardless of who delivered the message, Rey’s spoken treatise on it would have highlighted the beauty and importance of the democratic and republican spirit world and the corrupt material world he and the rest seated at the table currently occupied. It was the duty of this group, the Cercle Harmonique, to imitate the egalitarian world of the spirits here on earth and Reconstruction was the time to do it. After concluding his short lecture, the group felt unified. With this harmony established, the lines of communication between the Cercle Harmonique and the spirit world were open. The medium could begin receiving wisdom from spiritual advisers like Saint Vincent de Paul, Voltaire, John Brown, or perhaps Rey’s deceased father. Like all messages, the group recorded them. As one spirit explained, a medium, as a true apostle of Spiritualism, “must write what is dictated.”

For a community of spirits and Spiritualists who frequently criticized the material world and humanity’s proclivity for “materialism” (that “vile” source of “antagonism”), their practice had a significant material component—the making of their own library. The books in their library were spiritually crowdsourced with messages from hundreds of different spirits inside. The result was thirty-five large register books, which amounts to over eight thousand pages, filled with missives from the spirit world. At the beginning of a meeting, the medium in charge would write the day’s date in the book and then begin recording the messages the Cercle Harmonique received, likely as the message was being conveyed to the medium. The message needed to be recorded in its entirety. The Spiritualist secretary did not use shorthand and the messages don’t seem paraphrased. At the end of each message, a name is signed on the right-hand side of the page like a letter. Many of these spiritual guides are well-known: Lincoln, Voltaire, Saint Vincent de Paul, Daniel Webster, Montesquieu, Robert E. Lee, Pocahontas. Even Lorenzo Dow delivered a message once. Others are less so: the mediums’ deceased parents, local New Orleanian priests, or spirits that remained anonymous.

The record-keeping of the Cercle Harmonique bordered on graphomania. While Spiritualism is typically described by both practitioners and scholars as a religion focused on the spiritual and the non-material, the copious records of the Cercle Harmonique indicate the importance of putting to paper—and thus making material—the spirits’ messages. Transcribing the messages from the spirit world legitimated the perfect, egalitarian world of the spirits and justified the republican outlook of the Cercle Harmonique. Simply put, the idealized spirit world was not really real until it was written down. Once the words of the spirits became tangible, then they became truth.
Email Post
Labels: african american religion emily's posts material culture material religion new orleans spiritualism

Paul Harvey said…
Wanted to let you all know that Emily's dissertation/soon-to-be-book manuscript is one of the best I've read in a good long while, with wonderfully fresh and exciting research. And a big congratulations to Emily for her new position at Gonzaga! I predict that, after she takes her post there, the Zags will go much further in the NCAA brackets than they have been lately.
May 25, 2014 at 1:17 PM

Can't wait for this ephemeral dissertation to be in textual form! Perhaps you could autograph my copy to make it really real.

So, why do you think the Cercle Harmonique was so textually oriented? Why no rappings or other manifestations?

Also, could it be that the Cercle's inclination to texualize was incidental to their epistemology? That their text-making is suggestive of a pragmatic proclivity to chronicle rather than a conceptual move to validate?
May 28, 2014 at 1:39 PM

esclark said…
Hi Adam -
On your first question, there may have been other manifestations during meetings, but the Cercle chose not to record those. The earliest seance book contains an autobiographical essay by Rey in which he briefly discusses the other ways he interacted with spirits (seeing them, one case of a rapping during the middle of the night that he and his wife felt). As far as their meetings go, it's all about the spirits' textual messages. I think it's because of the political nature of the messages. That was their real importance. The Cercle's heyday was during Reconstruction, and essays on republican society from respected identities (like Lincoln) went a long way.

On your second question, I don't think the two are mutually exclusive. There was a pragmatic-ness to the making of their library. Not only could this particular community of Afro-creoles read and write, they were highly educated. That matters and reflected in their practice.
May 28, 2014 at 6:05 PM