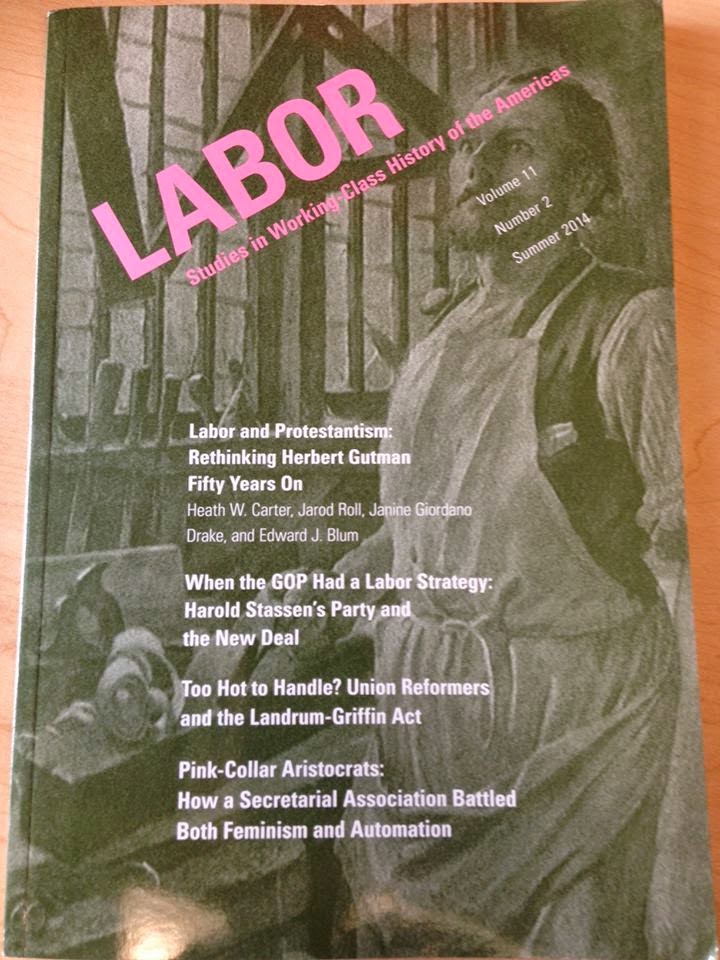 I've tried to imagine what life was like in 1966 when Herbert Gutman's landmark AHR article, "Protestantism and the American Labor Movement" arrived in historians' mailboxes. I imagine that evangelical college groups using terms like "Followers of Jesus" and "Non-Denominational Christians" advertised all over campus, and historians stared at their posters with sincere puzzlement.

At the time, I imagine, most historians were less concerned with the questions we're asking now [were these folks going to turn into Democrats or Republicans?] and were much more concerned with questions that animated their life cycles. Namely, what happened to the religious denominations?! Who are their religious authorities? Who is bankrolling this? And, what ethnic groups are driving this trend? If the historians showed up for the meetings (and I imagine the groups had fliers everywhere), I bet they'd remain puzzled. I can imagine slender male professors in bell bottom pants asking these young evangelicals, "Are your parents Lutherans, Presbyterians, Methodists, Catholics? Are you WASPs, Irish or---no, you look German. Is that a German last name?" When the long haired young evangelicals responded with comments about how we're all God's children and none of that really mattered, I imagine the social historians--especially those who had been studying ethnic and racial segmentation--found that evasion encouraging, fascinating, and yet also terribly naive.

This is the world I imagine that Herbert Gutman had before him when he penned that famous article which he subtitled, "The Christian Spirit in the Gilded Age." In it, Gutman argued that many of the newly urbanized working classes of the late nineteenth and early twentieth centuries were Protestants, even though they derived from a great variety of cultures. Many were, in fact, white Anglo Saxons who migrated from rural tenant farming and small landholding regions of the midwest and South, and brought with them small-town and socialist ethics of cooperation. Some were immigrants with Protestant and socialist ethics brought over from the "old world." These folks, perhaps like some of Gutman's college students, carried on a revivalistic faith that was not the same as that of their ministers. Like Gutman's college students, Gilded Age workers were largely not confined by denominations. Some of Gutman's subjects came from Holiness and Pentecostal revival traditions which had worked alongside and outside of denominations. Many brought with them a history of revivalism around Christian ethics-- a set of Christian traditions that had been centered in guilds and barns, but not entirely in churches.


Gutman made two main assertions. First, that if we want to understand labor in the Gilded Age, we need to examine "the mind of the worker" and pay attention to the intellectual and religious sources of class and labor consciousness. And second, that the spiritual and religious history of Gilded Age workers depicted a different narrative than that of the Gilded Age's middle class ministers.

Almost fifty years later, terms like "the mind of the worker" are long passe, but the arguments Gutman makes are still provocative. That is: to what extent did religion animate labor organizing in this period? To what extent is the history of working class Christians significantly different from that of the professional and ministerial class--the focus of most religious histories?

In the brand new issue of LABOR: Studies in Working Class History of the Americas, four scholars take on this question. Check out the issue! Our bloggers and friends Heath Carter, Ed Blum, Jarod Roll and I have all contributed.

[P.S. The cover depicts an image of a workingman who is Christlike, and not ashamed of his the fact that he is not a fancy society man, but a wage earner. It comes from the cover of Bouck White's 1914 The Call of the Carpenter. Below the original image is the caption, "The Carpenter of Nazareth Was a Workman That Needeth Not Be Ashamed." Stay tuned for more on this.]
Email Post
Labels: counterculture hippies janine's posts religion and class religion and labor religious left