Conference Announcement: Religion and Sexual Revolutions at the Danforth Center 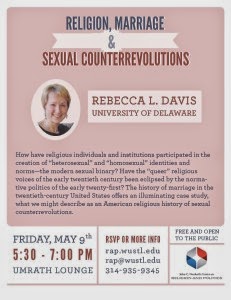 Now that I've turned in my dissertation, I'm looking forward to leaving my office and getting back out into the world! I'm particularly excited about the lineup for the Danforth Center's next graduate student conference, "Religion and Sexual Revolutions." If you're in or around St. Louis next Friday, May 9, this looks worth a visit. University of Delaware historian Rebecca L. Davis will be giving the keynote, "Religion, Marriage, and Sexual Counterrevolutions," and our own Paul Putz will be presenting "'Endless Miseries, Ruined Lives, and Social Disasters': Marrying Parsons and Sexual Revolution in the Progressive Era."

The full conference schedule is posted after the jump.

Religion and Sexual Revolutions
Friday, May 9, 2014
Free and Open to the Public
RSVP rap@wustl.edu

Adina Johnson (Baylor University, HIST), “‘Exploitation of Our Young American Womanhood on the Grounds of Patriotism’: Protestant Responses to Cultural Changes on the Home Front During World War II”

It's also worth noting that we're less than a month out from the sixteenth Berkshire Conference on the History of Women (May 22-25, 2014 in Toronto, ON), aka the Big Berks. Berks organizers have posted a list of religious studies papers and panels on their website, and you can bet I'll be sitting in on Carol Faulkner's presentation "'Spiritualistic Free Love': Religious and Sexual Respectability in the Women's Rights Movement" as part of the panel "Religious Outsiders in the 19th-Century Women's Rights Movement."

It might be the end of the semester, but there's a lot going on! If any readers are headed to St. Louis and/or Toronto, leave a comment -- I'd love to see you there.
Email Post
Labels: conferences Danforth Center on Religion and Politics monica's posts professional announcements religion and sexuality women's history