Under the Radar--Interviews with Historians You Should Know 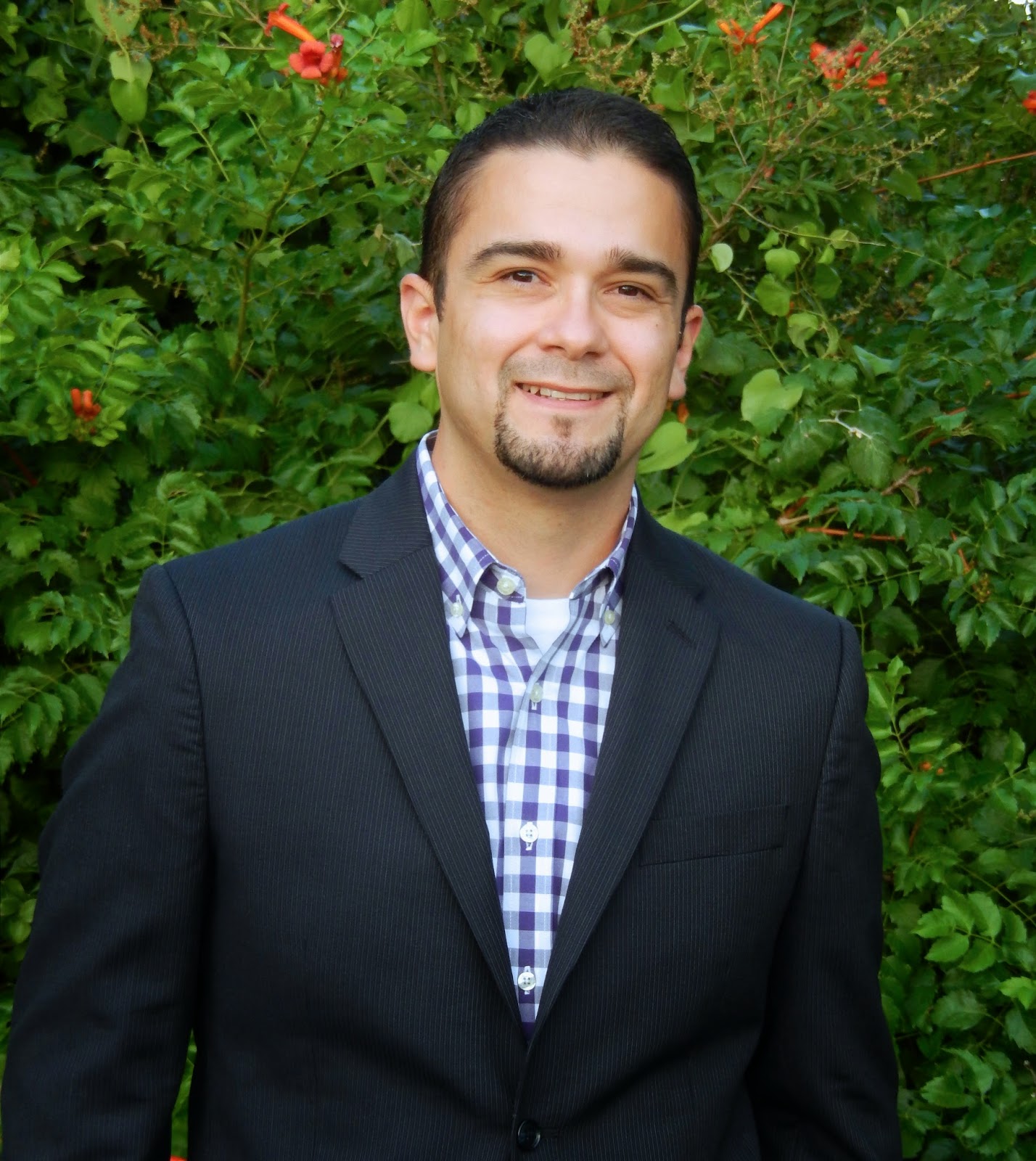 I met Felipe a couple of years ago and when you know someone is doing such significant work in a field that has really yet to gain traction, it was a thrill to read the early drafts of what eventually became this pathbreaking book on Latino/a Mennonites. Felipe is one of the up and coming academics who point to the intersections of Latino/a religious life, activism, and relationships as a way to speak to a large audience of Chicano/a historians, and American religious historians about the nature of  our lived religious lives and how they inform and shape how we live in "Occupied America."

Felipe Hinojosa is an assistant professor of history at Texas A&M University. He received his PhD in history from the University of Houston and has published articles on race, the Chicano movement and War on Poverty in Texas, Latino/a religion, and the relationship between ethnic studies and religious studies. His teaching and research interests include Latina/o-Chicana/o studies, American religion, social movements, gender, and comparative race and ethnicity. Hinojosa’s new book, Latino Mennonites: Civil Rights, Faith, and Evangelical Culture (Johns Hopkins University Press) was released earlier this year. (see link at the end of the interview).

1) Give us the gist of the book’s argument about Latino/a Mennonites?

First, I’d like to thank you, Professor Sánchez-Walsh, for the opportunity to talk about my new book!

In Latino Mennonites: Civil Rights, Faith & Evangelical Culture I argue that the civil rights movement, from the black freedom struggle to the Chicana/o and Puerto Rican movements, played a central role in helping shape and define ethnic and religious identity for Latinas/os in the Mennonite Church. While much has been written about Latina/o religious activism, my challenge was to try and reassess the motivations, politics, and contradictions of Latina/o religious activism across a wider demographic lens and a longer time frame. I do this in two ways.

First, my work takes a comparative and relational approach to Latina/o religious activism. By that I mean that I pay close attention to the relationships and collaborations that formed between Mexican Americans, Puerto Ricans, and African Americans in the years after World War II. In that sense, a large part of the book is devoted to discussing the limits and possibilities of multiethnic coalitions within religious contexts. The clearest example of this black/brown coalition within the Mennonite Church was the Minority Ministries Council (MMC), which organized in 1968 and worked to transform the church into a more inclusive space for people of color. As one of the few interethnic religious groups in the U.S. during the civil rights era, the politics and organizing of MMC leaders were more than historical quirks. Their work revealed the creative possibilities and hopes of Latina/o religious activism in three important ways: first, Latina/o religious activism was reformist, not revolutionary; second, faith-informed activism was always gendered; and third, the space of the church created possibilities for interethnic collaborations. These movements, I quickly learned, were a big reason why Latinas/os remained invested in fighting for inclusion in a largely white and rural church with a strong peace tradition. More than anything, this had to do with the relationships, collaborations, and the interethnic political movements forged among Mexican Americans, Puerto Ricans, African Americans, and progressive Anglos.

But even as the civil rights movement is important in my work, I place religious activism within a longer and wider context that begins in the 1930s and ends when most believe the country was shifting toward conservative religious politics in the late 1970s. In other words, my work disrupts the traditional civil rights narrative that has dominated much of the scholarship on Latina/o religious activism. By tracing the politics and religious identity formations of Latinas/os—from the days when they enjoyed “kool-aid and cookies” at vacation Bible schools in places like Chicago, Puerto Rico, and South Texas to their work as religious activists in the Midwest—I tried to contextualize how it is that some Latinas/os went from preaching John 3:16 to preaching “Chicanismo” and “el movimiento de la mujer” (the women’s movement). And these politics did not go away in the late 1970s and 1980s. Part of the reason that some scholars believe that identity politics got in the way of forging a progressive religious movement in the 1970s is precisely because they ignore the creative and innovative religious politics of Latina/o evángelicos and Católicos. In this way, studying Latina/o religious history radically challenges the ubiquitous notion that religious politics took a decidedly right turn in the 1970s.


2) What material would you have wanted to include that you did not?

First, I wish I could have written more in-depth about Mexican American and Puerto Rican conscientious objectors (COs) during the Vietnam War. Given the strong tradition of military service of Latinas/os, this was indeed a captivating story. Not so much because they signed up as COs (there was a strong anti-war movement within the Chicana/o and Puerto Rican movements), but because of how the anti-war movement radicalized and politicized Latina/o Mennonites. The racial privilege of being anti-war also came to the forefront. Latina/o Mennonites often voiced their discomforts with white Mennonites whom they believed took the anti-war position for granted, especially when they appeared clueless about the sacrifices of many Latina/o and African American soldiers in Vietnam.

Second, I gathered a lot of information on the Mennonite Church in Puerto Rico and its initial work through the “Civilian Public Service” program during World War II. The political and religious economy of Puerto Rico transformed during the middle part of the twentieth century and Mennonite COs, as well as other COs from historic peace churches, were a major part of this transformation. There is some really interesting stuff here that unfortunately did not fit within my own study. I hope, however, that someone does take up the idea of exploring the role of federal and religious intervention in the transformation of the island as a possible dissertation topic or book idea.

3) You have interviewed Latino/a Mennonites about their faith lives, that requires some measure of critical distance, how did you accomplish this for the book?

It was a delicate balance. For many of the folks I interviewed, it was the first time that anyone had ever asked them about their story and about how they felt as a person of color in a predominately white church. In my approach to conducting oral history interviews, I wanted to make sure that people knew that I respected their faith journeys. That often required me to open up about my own faith perspective and for the most part I was comfortable with this. There were also many instances when people prayed for me before and after I interviewed them. Those moments were important for me and I did not shy away from them because I saw them as a way for me to build trust with the people kind enough to share their stories with me. Without question, when you wade into the complex waters of religious studies, especially when writing about Latina/o evangelicals, you better be ready to talk about your faith. And if you attend church services as a participant or observer, you better be ready to share your testimonio con la congregación (your testimony with the congregation) because more often than not the pastor will extend an invitation for you to speak in front of the church. But intimate moments like sharing a prayer or sharing a testimony in front of a congregation also forced me to work hard to maintain a healthy distance with the people I interviewed. I’m not sure if I succeeded, but I did my best to honor the stories of struggle that people so graciously shared with me.

4) We have talked about the division between Chicano history/historians, and those of us who were trained in that field, but have migrated over to writing about Latino/a religious history, how do you see your book as mediating that division?

Yes, this is something that I have thought a lot about. Primarily because as someone who was trained in Chicana/o history, it was clear that religion remained one of the most understudied areas in our field. This is certainly changing as the works of scholars such as Lara Medina, Arlene Sánchez-Walsh, Mario T. Garcia, Roberto Treviño, and Timothy Matovina have made significant interventions in Chicana/o history in the last fifteen years. These works clearly show that historically the relationship between religion and Chicana/o activism was much closer and more productive than previously acknowledged. And in many ways I see my book as following in the footsteps of these works but also extending the discussion one step further by incorporating a comparative and relational framework through which to better understand Latina/o religion. In this way, I offer my work as another small step in understanding the relationship between religious faith and political activism. The time is right for a more fruitful interrogation of the ways in which religious studies can change Chicana/o history and vice versa. What I believe my book contributes is a way to rethink and resituate the Chicana/o and Puerto Rican movements within a comparative and relational Latina/o civil rights framework that acknowledges common struggles across space, place, and religious cultures. By offering fresh insights into familiar topics (Latina/o religious activism) and exploring previously unknown subjects such as the history of Latina/o Mennonites in the Midwest, the study of religion expands the thematic possibilities of Chicana/o history and opens new avenues for mapping a narrative of Latina/o religious history that merges multiple and disparate historiographies.


5) Academia, like Hollywood is about ‘what have you done for me lately’, so now that the book is out, what work do you have coming up in the next couple of years?

I’ve got a couple of projects in mind. One that I am beginning to conceptualize now is looking at the relationship between Latino religious and community organizations and the War on Poverty in the 1960s. I am interested in the work of the Catholic Interracial Council in the Midwest and Latino Faith-Based organizations in places like New York, Chicago, and Houston. I have already started doing some research at the University of Iowa, UC Santa Barbara, and in Houston and hope to do research in Chicago and New York this summer. The first writing to emerge from this second project was recently published in the Winter 2013 issue of the Western Historical Quarterly. The article, “¡Medicina Sí Muerte No!” places the history of the War on Poverty in the small South Texas town of Mathis in the larger context of Chicana/o and African American political and religious movements where public health and antipoverty campaigns constituted a major part of civil rights struggles. I also have a book chapter on Latina/o religious activism in the Midwest that is in the works right now and should be out later next year. This is an exciting time to be writing about Latina/o religious communities. With Latinos accounting for more than half of the nation’s growth in the last ten years, it is now more important than ever to document and uncover the long and complex histories of Latino religious communities across the U.S.

Supporting the work of our young scholars is of upmost importance for me, so, if you have a few spare dollars in the library budget or a spare Amazon card lying around...buy this book!
Latino/a Mennonites from Johns Hopkins University Press.
Email Post

Phillip Luke Sinitiere said…
Great interview, Arlene. Indeed, Felipe is a historian to know. Having also seen this project take shape over the years, it is great to see it in print and I'm excited to assign it for a course I'm teaching this summer. Also impressive is the nice coupling of documentary materials with oral history--Felipe provides an expert example of this kind of work.
March 28, 2014 at 12:13 PM