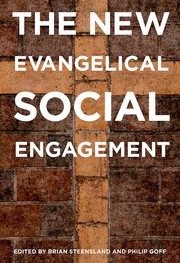 Similar to Seth Dowland’s response, reading The New Evangelical Social Engagement left me perplexed, but in a good way. What is it that we mean by the term evangelicalism, with its historical baggage, political connotations, and multiple expressions? Yet there it is, still: evangelicalism. It is here, present (and past), in the form of self-identifying evangelicals or self-identifying evangelical institutions; but then it is, again, elusive, a social and political construct or frame deployed over time and used to advance legislative objectives or cultural arguments. In the midst of these questions, discussions, and arguments, the editors and essayists in The New Evangelical Social Engagement leave us perplexed in a good way by providing much about which to ponder, reflect, analyze, and of course engage in future scholarship.


While Seth’s insightful summary provided much to consider in terms of new evangelical political opinion, the history of evangelical politics, environmental activism, and social outreach, for me the volume highlighted the multiple methodologies and numerous disciplinary perspectives currently used to analyze the undefinable, but identifiable, evangelicalism. While Seth was particularly enthusiastic about the way that chapters on politics and activism open new doors for future analysis—an excitement I share and look forward to in the form of his own forthcoming work on new evangelical politics—my enthusiasm centers on how particular chapters offer what ethnography and sociology (and for that matter psychology, with T. M. Luhrmann’s When God Talks Back in mind) will continue to reveal about evangelical identity and its fascinating lived, expressed dimensions.

Although trained as a historian to have faith in documentary evidence, I have also learned to see the light from engaging in fieldwork/participant-observation and asking questions to practitioners. On these points I’ve learned much from the theoretical interventions of folks like Robert Orsi, Ann Taves, Thomas Tweed, and Manuel Vasquez—as well as Kate Bowler’s model of “collaborative ethnography” in Blessed. But I’m also propelled in this direction when I recall where fellow historian Randall Balmer refers to himself as a “shade tree sociologist” (here and here). For my own work I opt for the term amateur ethnographer since my nearly completed book on Joel Osteen and Lakewood Church employs both the analysis of documentary evidence and the participant-observation of ethnographic fieldwork. For all these reasons and more, I found in The New Evangelical Social Engagement intriguing chapters by James Bielo, Omri Elisha, Adriane Bilous, and Laurel Kearns, along with the co-authored efforts of Michael Emerson and Gerardo Marti.

Bielo’s chapter focuses on the “localized” social engagement of a group of “Emerging evangelicals” in Ohio. Building on his great study Emerging Evangelicals, Bielo’s fieldwork with new evangelicals associated with the Emerging church movement zeroed in on group scripture study and organized attempts at spiritual formation within the context of intentional Christian community. Bielo’s Emerging evangelicals in Ohio wanted to actively resist the evangelical division between the spiritual and the temporal (e.g., “in the world but not of the world”) in favor of an active communalism and focused community engagement. Bielo’s ethnographic research documented that part of understanding the Emerging strain of new evangelical social engagement is to grasp how, in the context of intensive study of the Bible and a desire to make a spiritual imprint on “the world,” theoretical commitments to communalism and social activism exist in tension with evangelicalism’s identifiable individualism. Bielo’s work in this chapter and in his books on evangelical scriptural analysis expertly show how ethnography can reveal important aspects of evangelical life. If his previous scholarship is any indication, then Bielo’s current ethnography of a theme park associated with the Answers in Genesis operation—especially in light of recent coverage of the Bill Nye-Ken Ham “debate”—will no doubt create a compelling ethnographic analysis that will prompt us to think in new ways about evangelical social engagement.


Omri Elisha’s chapter builds on his illuminating ethnography of Tennessee evangelicals, Moral Ambition, by charting recent intersections of evangelical-Catholic social activism. Born from some evangelicals’ willingness to read and learn from Catholic writers coupled with evangelicals’ energy to engage social issues in American society, the “resonances” (p. 74) between evangelicals and Catholics on questions about suffering, charity, and social justice reveal “closer alignments in their modalities of religious and social action” (p. 74). Elisha’s research revealed evangelical efforts at compassion inspired by the Catholic writer Henri Nouwen. Influenced by the materiality of Catholic sacrementalism, Elisha’s evangelical informants expressed a commitment to an embodiment of “grace” in the form of charity and self-giving. Finally, evangelical articulations of social justice by employing language of the “common good” and enacting initiatives of environmental justice, for example, highlighted more robust understandings of structural injustice (as opposed to the evangelical obsession with personalized infractions of “sinful” behavior) that owe a debt to Catholic social teaching. Elisha’s chapter shows that on-the-ground analysis of contemporary evangelicalism—as opposed to solely textual or discursive study—unveils fascinating, complementary, and contradictory elements of the new evangelical social engagement.


In a chapter on evangelical social engagement through the creation of multiracial congregations, social scientists Michael Emerson and Gerardo Marti—both accomplished scholars in the field of race relations and the sociology of religion—track the study of race and evangelicalism in a new direction by demonstrating first that in the last four or five decades (white) evangelicals have become conscious of America’s racialized society and, as a result, seek a social engagement of racial justice. Second, Emerson and Marti show that the consequent rise of multiracial congregations created a class of pastoral leaders the authors call “diversity experts” (p. 179) whose churches adopt a “badge of diversity” (p. 183) as a way to instruct other congregations how to transition from a homogenous racial identity to one of multiple racial identities. The problem, as Emerson and Marti show in their close analysis of rhetoric and discourse, is that the evangelical activist impulse that brought about positive changes on the diversity front actually work against evangelicals. Evangelicalism’s relationalism leads to “diversity experts” trafficking in racial stereotypes and perpetuating racial divisions due to an inability to understand structural racism apart from individual acts of discrimination and by avoiding tough, emotionally charged discussions about race altogether. Emerson and Marti suggest a very measured hope for the future of new evangelical social engagement on race matters. While this new social engagement on race has witnessed advances towards racial and economic justice, spiritualizing categories of race and ethnicity has failed up to this point to reckon robustly with the structural inequalities that fostered injustice all along.


Additional exciting chapters rooted in aspects of ethnographic fieldwork include those of Adriane Bilous on evangelical feminist politics and Laurel Kearns on evangelical environmental activism. Bilous’s chapter focuses on millennial evangelical female “servant activists” (p. 110) to understand a broad cross-section of younger evangelicals in New York City. Through fieldwork, Bilous discovered that these servant activists maintain a fidelity to evangelical theological teachings and an abiding skepticism towards defining evangelical political action in terms of the Republican Party, while applying a service-oriented politics of social engagement to local antipoverty work, for example, as well as to global eradication of human trafficking. Inspired from her own work at the intersection of religion and environmental activism, Kearns’s chapter effectively explains the diversity of evangelical opinions about what environmentalism actually means, from money-saving strategies of megachurches to go green, to well-funded evangelicals who deny climate change, to other broad-based coalition work associated with groups such as the New Evangelical Partnership for the Common Good. With activist logics bathed in scriptural teachings that suggest care of and for God’s creation, Kearns shows that problematic to green evangelicals’ future is the largely Anglo roster of environmental activists, as well as the individualism that hampers a evangelicals’ grasp of societal structures that lead to environmental devastation in the first place. Nevertheless, Kearns predicts that a large range of environmental issues will remain vital to the future of green evangelicals’ social engagement.


In sum, The New Evangelical Social Engagement does not provide an overarching definition of “evangelical” or explain the benefits or drawbacks of either continuing to use the term or discarding it altogether. However, this worthwhile, must-read essay collection does leave us with the future task of continuing to highlight contextual, local features of evangelical beliefs and actions, providing analysis from multiple disciplinary perspectives. It persuades us to attend to the complex political, racial, ethnic, and/or gender alignments on a whole host of political and social issues. Above all, it compels us to remember that never (and certainly not in the future) has only one political orientation or political party defined what “new” evangelical social engagement means.
Email Post
Labels: ethnography evangelicalism new books phil's posts religion and the environment religious feminism sociology of religion

Mark T. Edwards said…
Thanks for these wonderful reviews, Seth and Phil!

To the question of defining "evangelical," as opposed to say, liberal Protestant or Catholic, descriptors like individualistic, entrepreneurial, and utilitarian come to mind. The reflection on the Marti and Emerson chapter is especially leading me to ask: Do these "new" engagements mark a significant break with those aforementioned evangelical traits? Does Bielo's work or the new monasticism chapter, for instance, suggest that these evangelicals are developing a more robust, corporate sense of the church (like liberal evangelicals tried to do in the 1920s and 1930s)?
March 13, 2014 at 6:01 PM

Phillip Luke Sinitiere said…
Thanks, Mark. Good questions. While the "new" of course references work done in the 21st century, I think we can perhaps read "new" in the volume to also mean evangelicals of varying political persuasions with a variety of motivations are championing a wide host of causes, issues, etc. Perhaps this diversity of motivating political opinions is in some ways distinct from previous evangelical social engagement, while also reflecting significant continuity. Again, I think you ask a really good question here—and I look forward to hearing more well-informed thoughts on this from blog readers.

So while I think the jury is still out with regard to your query on historical comparisons, there does seem to be distinct communalist impulses present. It also strikes me that one’s perspective on this question may be determined in part from what disciplinary framework (or frameworks) one is working from. Yet, one of the conclusions I draw from the history, sociology, and ethnography I've read on the subject persuades me that the material and political realities evangelicals hope to change and/or adjust are typically hampered by the persistent individualist (or, as you rightly say, entrepreneurial, utilitarian, etc.) thrust that often spiritualizes culture. Or at least the impact of evangelical social engagement on particular issues have unintended, ironic and/or contradictory outcomes.