The Age of Evangelicalism: An Interview with Steven P. Miller

The following is an interview with friend of the blog Steven P. Miller about his groundbreaking new book, The Age of Evangelicalism: America's Born-Again Years (Oxford, May 2014).  Miller is also author of the critically acclaimed Billy Graham and the Rise of the Republican South (Penn, 2009).  If you backmask this post, a surprising revelation will appear: The Philadelphia Eagles will win the Super Bowl in 2015. 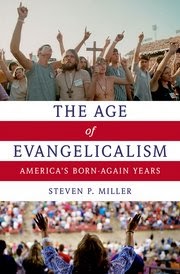 1. How does The Age of Evangelicalism relate to your first book on Billy Graham?  Do you see it as a natural outgrowth or a new direction?

In most respects, the two books are quite different.  After completing the second one, though, I do have a greater appreciation for how Billy Graham was simply the opening chapter of a larger evangelical renaissance.  My emphasis is on the diffuse nature of that renaissance by the late 1970s.  People like Harold Lindsell were trying to define theological moderates out of evangelicalism, while someone like Jerry Falwell was trying to reassert the label fundamentalist.  Yet no one person or institution could control a discourse about evangelicalism and fundamentalism that also involved Larry Flynt, Ruth Carter Stapleton, and even Ayatollah Khomeini.  Such were the terms of influence, as I argue.

As for how I go about evaluating that influence, there are definitely some similarities between the two books.  My approach has been to weigh the categories that my subjects delineated (“religion” here, “politics” there) against the inevitable “lived worldliness” (as I have elsewhere put it) that came with being an important historical actor.  The resulting tension is not an indicator of hypocrisy, but rather a gauge of significance.  Historical empathy, for me, means respecting the ideas of my subjects enough to state them clearly.  Historical analysis requires connecting those ideas with related phenomena.  Marabel Morgan’s The Total Woman tapped profoundly into the needs of her audience, including many non-evangelicals.  Her book would have been a best-seller even had the Equal Rights Amendment or abortion remained marginal issues.  Yet to describe her in terms of “therapeutic antifeminism,” as I do, is not to impose a secular category.  Rather, it is to explain why she made the cover of Time magazine.  Likewise, it is not unfair to call Jim Wallis a member of the “religious left,” even if he has tried to reject that label.  Wallis was precisely the kind of politically progressive Christian whom Democrats sought out in the mid-2000s as they obsessed about the electoral “God gap”—and he reciprocated.  One of the most underappreciated aspects of evangelical entrepreneurship is the use of strategically self-limiting language.  But Morgan sold millions of books, and Wallis helped to make the Obama brand possible.  They were not bit players.

2. Could you talk a bit about your thesis by way of explaining the title of your introduction: “An Age, Not a Subculture?”

I’m not suggesting that an evangelical subculture doesn’t exist (far from it).  Rather, I would contend that the evangelical subculture is just one part of a larger story about evangelicalism and its impact on recent American history.  In other words, I am interested in writing a history in which evangelicals (whether one defines them using a loose Gallup-style formula or a tight Barna-style one) were not the only protagonists in evangelical history.  People for the American Way, the new atheists, and the West Memphis Three were part of the story, too.  I run into Christians all the time whose religious identity is very much linked with not being evangelical.  That dynamic, in and of itself, could be a chapter in the history of evangelicalism.

3. You write that "the recent history of American evangelicalism looks different . . . when it is not solely about evangelicals themselves" (pp. 7-8).  Would you consider your book a kind of reception history--of how once-subcultural ideas and practices were mainstreamed?  How did you navigate the tension between broad descriptive survey and proving what we might call your evangelicalization thesis?

I am not sure if “reception history” is quite what I was writing, although perhaps I am just parsing phrases.  I see my book as a story of how the public presence and awareness of born-again Christianity (which, in the vast majority of uses, was synonymous with “evangelicalism”) shaped how Americans understood and evaluated their times.  Sometimes, specific evangelical arguments were very influential in their own right.  Other times, they served as foils.  Either way, millions of Americans came to understand themselves in relation to evangelical phenomena.  The “satanic panic” tapped into deep anxieties about American popular culture and equally deep cynicism about media culture.  Megachurches informed debates about civil society.  The “public square” and the “culture wars” became the dominant metaphors for how Americans talked about the public status of religion.  And on and on.
I am drawn to writing in a manner that is both chronological and thematic.  This can be a tricky scheme.  Decades are handier for chapters than for big arguments.  Still, a chronological approach can offer readers a sense of how similar ideas were voiced in very different contexts and how specific actors popped in and out of certain stories.  Forty-plus years of American history is a good chunk of time, although it seems easier to keep this in mind when comparing 1930 and 1970, as opposed to 1970 and 2010.  I do not include Barack Obama in the same chapter as Jimmy Carter, even though Obama sought to recover the kind of evangelical politics that seemingly disappeared when Carter left office.  I made a similar decision to divide my discussions of the evangelical left.  The evangelical left’s influence on American politics was most striking in two very different contexts: in the early 1970s, when it helped to foster a new evangelical salience amid the fallout from Watergate; and in the mid-2000s, when it demonstrated that the Christian Right was not the only story about evangelical politics.  There was a rich, rich history in between, as David Swartz and Brantley Gasaway have shown us.

4. You open the book with a quotation from Alan Wolfe about how "we are all evangelicals now."  And yet your study in some ways appears to be an autopsy of an Age which, you suggest, died in 2012 (pp. 162-63).  Have we now passed through evangelicalism's middle ages into its memorial service?  Or, do you imagine something like the liberal Protestant "cultural victory" argument (Demerath, Hollinger, Hedstrom) now passing to the evangelicals—i e., evangelical numbers and institutions will shrink even as their beliefs and values become normalized among the general population?

My epilogue is not an autopsy.  It is an invitation to take stock of a moment in recent American history.  I was very intentional about using the expression “winding down,” rather than the more concrete “ending.”  The Alan Wolfe line points to the recognition of evangelical ubiquity, which was a going concern during the period I consider.  For the moment, evangelicalism retains its spectacle quality.  I have secular, politically liberal friends who love Duck Dynasty (or at least they did before that Esquire piece).  At the same time, it is a bit weird how so many popular articles about evangelical phenomena read like they might have been written in 1976, which George Gallup, Jr., famously declared the “Year of the Evangelical.”  What I would say, then—as I suggested earlier—is that we need to appreciate that a lot of things happened after Gallup made his pronouncement.  Jimmy Carter and Jerry Falwell are not yesterday’s news; they are a generation ago’s news.

There have been so many great works in recent years, and there are more to come.  As I state in my Introduction, we can now clearly connect evangelicalism with any number of huge demographic, economic, and political shifts since the mid-twentieth century.  My book owes a tremendous debt to the historians who drew those connections, as well as to the journalists who tried to make sense of evangelical phenomena that seemingly came out of nowhere.  I should note, too, that I do not intend my book as a corrective to these newer works, even if my approach is (I think) different than most.  I have no idea whether anyone will run with the idea of a more expansive historical use of evangelicalism.  Looking ahead, an exciting angle is the global turn, and there are a number of studies in the works along those lines.  The political narrative is far from exhausted (and the cultural angle is inexhaustible, one supposes).  We have so much more to learn about the anti-abortion movement, for example, as well as about policy in general.  The influence of theology is so obvious that it has actually been understudied.  A number of recent and forthcoming works refreshingly treat theology as the stuff of intellectual history.  There are so many fantastic scholars who deserve a shout-out—too many to attempt to name in one place.
I’m no Hal Lindsey, but I will offer a closing prediction: In the coming years, fewer and fewer historians of evangelicalism will have a childhood or existing connection to evangelical faith.
Ok, here is one more: The historiography of recent American evangelicalism will become livelier—which is to say, more contentious.

Phillip Luke Sinitiere said…
Great interview, Mark. Steven--I think I speak for many when I say I'm looking forward to your book.

A question: how did the rise of contemporary megachurches and their political meanings figure into your study? To what extent are they part of the "winding down" you mention in the interview?
March 24, 2014 at 8:51 AM

Steven P. Miller said…
Thanks for your kind words, Phil. Megachurches definitely factor into the book. Of special interest to me (beyond the political angle) is how they informed discussion about civil society (“bowling alone” and so on). It seems to me that Hybels and Warren (who were the most commonly cited megachurch pastors in such discussions) are no longer trend-setters the way they were in the 1990s and well into the 2000s. That’s part of what I mean by “winding down.” Of course, there are many other players in this story . . . For example, there’s this Osteen fellow who deserves a book of his own.
March 24, 2014 at 3:31 PM

Phillip Luke Sinitiere said…
Thanks, Steven. The evolution of the megachurch in the US is an important part of the story. Look forward to your analysis in the book. Yes, Osteen is a name I've been hearing quite often in Houston. I think he has a church there.
March 28, 2014 at 12:06 PM