Religion, Food, and Eating in North America: an interview with Benjamin E. Zeller

I'm pleased to post this interview with Benjamin Zeller of Lake Forest College. Ben is the author of Prophets and Protons: New Religious Movements and Science in Late Twentieth-Century America (New York University Press, 2010); an array of other publications on new religious movements; and co-editor along with Marie Dallam, Nora Rubel, and Reid Neilson of the newly published Religion, Food, and Eating in North America (Columbia University Press). I'm grateful that Ben took time to answer my questions about this book and the intersection of three of the favorite things of many contributors to this blog.

How would you summarize the book, and what central themes or questions tie the individual chapters together? 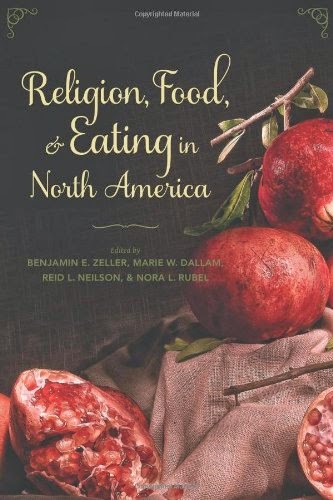 This is one of the few books where the title (Religion, Food, and Eating in North America) says exactly what the book covers! But religion, food, and eating in North America is a big topic, and we couldn’t cover everything, so we decided to focus on a few key themes: analyses of theological approaches to food, the relation of food to religious identities, food as means of negotiating religion and culture, and food as a method of social and religious activism. There are many more themes we might have covered, and there is overlap between the themes we did chose, but these four approaches allowed us to highlight some great new work in the study of religion in the US, Canada, and the Caribbean.

The book contains fifteen chapters overall, each one containing a case study of food and eating within one or two traditions. The book isn’t a reference book that looks at every religious tradition over time in North America, so there are some holes in what we cover. There’s nothing on Hinduism, for example, but that is because we couldn’t find anyone who was researching Hinduism and food in America. But we have chapters on Christians, Buddhists, Jews, Native Americans, Muslims, and several new religions. We also decided to focus on the near contemporary time period, though several chapters do consider earlier material.

Overall, the book argues for taking the study of food seriously within the academic study of religion, and for taking religion seriously among those involved in food studies. Looking at food and eating lets us think about both high theology and vernacular religion; both daily practice and liturgy; and both religious work done in kitchens as well as in houses of worship.

How did this book originate?

There are four co-editors, so I can only give my own perspective. But for me it started in the classroom when I was teaching an undergraduate seminar on religion & food. I spent a summer trawling libraries, databases, and anthologies looking for accessible and engaging readings. I found a lot to work with, but there was no single textbook that really did what I wanted.

I talked to some colleagues about creating a seminar unit of the American Academy of Religion (AAR) to create just such a book. These colleagues—Marie Dallam, Nora Rubel, and Reid Neilson—immediately signed on. I knew Marie from our work together at Temple University, and Nora and Reid from the University of North Carolina at Chapel Hill. All had interests in religion and food, and together we formed the steering committee for the “Religion, Food, and Eating” AAR seminar program unit. For the next four years we solicited papers and oversaw yearly meetings at the AAR where contributors presented their works in progress.

The book really benefits from its origin in the seminar. All the chapters but one were presented in that venue (and even that chapter was presented in a different AAR program unit), and they received careful critical readings from the dozens of other scholars who attended. Our meetings literally packed the rooms we were assigned, and we always went over our time limit in our discussions. Contributors, including myself, really benefited from all this feedback. It made our job as editors easier too, since the authors already had many opportunities to consider feedback and make revisions by the time we submitted chapters for peer review.

How did you become interested in the intersections of religion and food?

It’s funny, but the first time I really thought much about it from an academic perspective was when I was asked to teach a class on comparative religion. Like most religious studies scholars of our generation I am suspicious of the concept of “comparative religion,” since comparison often involves imposing categories not native to the religions being studied. But everyone eats, and every religion (that I know of!) has teachings and practices about food. So I decided to teach on that, and from the classroom the book was born.

More broadly than that, I had always noticed how central food is in religious gatherings and practices. Most people know about the Lord’s Supper (also known as the Eucharist, Communion, or some other designation in Christian traditions), and most know about some Jewish food practices such as kosher laws and Passover practices. But every religion I’ve ever encountered in some way engages food, whether that be social teachings, ritual offerings, or daily practices. That’s part of what got me and my students excited about the topic, and what has sustained my interest.

Because one of my original research areas is in new religious movements (NRMs), I had noticed that many NRMs own restaurants, highlight teachings about food, make food central to their evangelism, and otherwise emphasize food and eating in both practice and belief. The Hare Krishnas are a great example with their famous feasts, but other new religions are involved too. This probably prefigured me for an interest in religion and food.

What is your own chapter in this volume about?

I wrote about food practices as a quasi-religion. I interviewed vegans, vegetarians, and locavores and asked them how they got involved in these particular food practices. What happened is that most people told me conversion narratives, ones that directly paralleled religious conversion narratives. One even mentioned the apostle Paul and his famous conversion on the road to Damascus as a parallel to her experience of becoming a vegan! I use this sort of parallelism to analyze the sort of “conversions” that these people experienced. I draw on various sociological models of religious conversion to try to figure out how and why increasing number of people in Western society have adopted these alternative food practices. I don’t want to give all the answers away, but I find that for a lot of people, food and eating serve as forms of “quasi-religions,” and that for vegetarians and locavores especially there is an almost religious cast to their thinking about food. An important argument I offer is that we can use the tools of religious studies to understand food practices even outside religions proper.

How does this book and its focus on "religious foodways" offer new insights or raise new issues regarding historical or contemporary religious beliefs and behaviors in America?

Most broadly, it is part of the “lived religion” or vernacular religion approach to the field. The folklorist Leonard Primiano, who actually coined the term “vernacular religion,” contributed to our book. But we try to push the boundaries even of vernacular or lived religion, asking questions about how baking Christmas cookies or eating pasture-raised organic hallal meat—for example—sheds light on religious identity. We look to how religion is practiced in daily life, and with an eye towards material culture as well as the connections between materiality, practice, theology, and issues of communal and individual identity.

The book is quite interdisciplinary as well. Contributors draw from religious studies and food studies, but also make use of approaches from anthropology, folklore, theology, literary studies, and historiography. I think the book is a really good example of collaboration across subfields and disciplines.

Beyond courses devoted to "Religion and Food," how might professors use this book in their teaching?

The book focuses on American religions, so any course with that sort of emphasis—Contemporary American religion, for example—could utilize the book. Instructors interested in material culture or in religious practice should also take a look. We consider a really diverse set of religious movements, everything from Evangelicals to Jews to Buddhists to Santería to Seventh-day Adventists, so courses on minority religions or religious diversity are also a natural fit.

Finally, I think that religious studies scholars should read the book for their own sake too. Each chapter is original research, so while on the one hand we want the book used in the classroom, on the other hand each chapter contributes to scholarship as well. We’re very proud of what our contributors have done.
Email Post
Labels: author interviews brantley's posts material culture material religion new books new religious movements religion and food religious pluralism