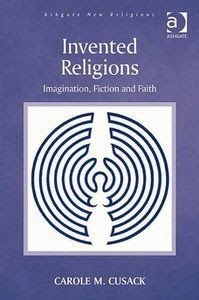 A couple of months ago I wrote about the recent creation of Yeezianity, the so-called religion of Kanye West. I was dubious about it, and its status as a religion. Not long after, however, I read a book that has made me reconsider my position. The book is Invented Religions: Imagination, Fiction and Faith by Carole M. Cusack (Ashgate 2010). Building on the themes of this book, she has recently guest edited an issue of the journal Culture and Religion (14.4 2013). In each instance Cusack argues that not only are these invented religions real religion, but they also reveal something important about how we define religion and how religion is utilized. What is different, she points out, is that these tradition do not attempt to legitimize themselves through claims of lineage, historical continuity, or revelation. Instead these tradition are self-consciously created out of popular contexts and the creators and followers do not care about the religion’s origin.

This conscious acceptance of the invented nature of the religion is what makes this category of religion so fascinating. While acknowledging that in some form or fashion all religions are invented, Cusack claims that since the 1950s, a new forms of religiosity has emerged, ones that are “advertised as fictional from the start.” “The model of ‘invented religion’ that I have advanced emphasises the self-conscious attention to the invented – i.e. not revealed or otherwise validated – status avowed within these religions.” Cusack looks at a variety of traditions including Discorianism, the Church of All Worlds—an eco-pagan group founded on Robert Heinlein’s A Stranger in a Strange Land, The Church of the SubGenius, and more recent traditions based on movies, Jediism and Matrixism, and finally the Church of the Flying Spaghetti Monster. In each of these traditions, the founders were well aware of the fictitious circumstances in which the traditions were founded, and the followers were too.

Taking Cusack’s explanation into account, we can see that Yeezianity squarely falls into the category of invented religion. Cusack also states that invented religions emphasize narrative and creativity. This certainly describes the approach taken by Brian Liebman, the founder of Yeezianity. Invented religions also open up a lens into how religion is conceptualized by society in general, and scholars of religion, in particular. In January, Candace Chellew-Hodge complained in a blog post on Religion Dispatches that Millennials are inventing religions that are shallow and incomplete, primarily because they ignore human conditions such as suffering . “By ignoring the question of suffering of humanity, and role of religion in addressing that suffering, I am afraid that this new generation is denying itself the opportunity to truly connect not just with the divine, if that's their thing, but with each other.” This claim, however, judges these invented religion by the standards of older, established faiths. If Cusack is correct, though, this is an invalid comparison. She notes that Christianity is the starting point for most in the west to conceptualize a real religion and invented religions, however, rejects these contentions for the basis of religion and substitutes their own. The problem, she notes, is that invented religions “cannot escape from the shadow of Christianity.”

Cusack concludes by contextualizing invented religions within notions of secularization. Scholars have been long concerned about the diminishing role of religion in western society. But is it diminishing or is it changing to something that is very different from preconceived notions of what is real religion? Cusack notes that invented religions indicate that religious impulse is still there, just manifesting differently. For the religions she focuses, she claims, are “new religious forms, and the science fiction narratives they draw upon are one of the new sites of the sacred in the contemporary West.” Perhaps contemporary pop-culture is also one of those sites leading to the semi-deification of Kanye West. After reading Cusack’s volume I am certainly willing to reconsider the position stated in my previous post. Yeezianity is certainly not like most traditional religious traditions. But perhaps, that’s the point.