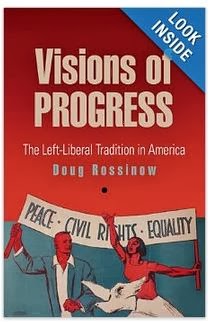 I've written for years about the Social Gospel movement, but I've always very carefully avoided the term "liberal" because it seemed to mean too many things all at once, and hence nothing at all.

Of course I knew that some historians use the term to refer to anyone who has challenged traditional norms in the realm of race, gender, and sexuality. In this definition, "liberals" are the mainline Protestants and other middle class whites who supported the early Civil Rights Movement. They're the Billy Grahams, the Virginia Durrs, the YWCA, and then, of course, the feminist and anti-racist, often middle-class, counterculture of the 1960s to the present-day.

I knew others, of course, use the term to emphasize its association of the word with its other definition: generous, and even sometimes over-generous. That is, folks refer to "liberals" as the FDR democrats who supported unions as a part of economic recovery, those who have been  comfortable with federal deficit spending, government work programs, price and wage controls, and employee protections.

I used to wonder why historians chose to use a term with two different meanings, especially when they only seemed to converge within a few key groups, at a few key moments in history. The people I knew, living and dead, always seemed to be a mix of political liberals and social conservatives, social liberals and political conservatives, and the like. For example, the Social Gospel leaders I studied (leaders in the Federal Council of Churches) were mostly supportive of unions, price and wage controls, and workplace protections. Yet, were also advocates of prohibition, vehemently in favor of film censorship, and major advocates of limiting premarital sexuality. No matter how much they advocated for fair wages, I would never call them liberals.

I realize now that I just never took the time to learn the history of liberals and liberalism, per se. My training in social history taught me to focus on the radicals and the Left, except of course for the occasional radicals of the Right. The folks who leaned Left but weren't quite radical enough to join, say, the Industrial Workers of the World or the Student Nonviolent Coordinating Committee, were usually assumed to be on a spectrum of sell-outs who ultimately sold short the hope for true social and economic equity. Whether it was middle class feminism of the 1970s or the coalition between the American Federation of Labor and the Congress of Industrial Organizations in the 1930s, theirs was something that strove for a semblance of social justice but did so at somebody else's expense. In the subfield of labor and working class history, "liberal" often means turncoat, and they never quite earned the right to be understood on their own terms.

Well, I just finished a fantastic book on liberals which I regret not finding years ago (when it was published, in 2009).  Doug Rossinow's Visions of Progress: The Left-Liberal Tradition in America traces the coalition of Progressives from around the 1890s to the 1970s, always very fairly, and on their own terms. He explains early twentieth century Progressives' simultaneous support for and distaste for radicals, the political battles they fought with antiwar advocates, and their Christian vision of economic redemption that ran up against some Marxist versions of class warfare. He explains how these Progressives declared domestic war on Marxists and anti-war advocates during World War I, even when it fragmented their own support considerably. These are very familiar stories, of course. But, Rossinow presents them in fair terms that help us understand liberals as political animals with a positive set values and goals that went beyond the semblance of kindness amidst the violent crushing of Marxists.

Even as liberals were divided and underground in the 1920s, Rossinow shows, their political descendants gave FDR the mandate to reform the economy with working people in mind, and LBJ the permission to continue this work in the War on Poverty. Without drawing too much attention to the point, Rossinow implies that we must understand the FDR and LBJ coalitions as direct descendants of those of the Progressives, and not just new groups which emerged from their own historical circumstances.

He also does all of us teachers a great service in connecting the history of the National Recovery Act with that of the CIO's Popular Front and thus explaining the origin of the coalition of liberals in the 1930s--the origin of the word's present-day usage. With the same exquisite precision and attention to detail as his earlier chapters, he follows the history of Progressives into the eras of Eisenhower, Kennedy, Nixon, and LBJ. He shows the ways that liberals carried through the twentieth century many of the same Progressive ideas of the 1890s: namely, the idea that capitalism was a good thing with nasty consequences when not restrained. He has a thoughtful (even if debatable) explanation for the relationship between liberals and the Feminist and Black Freedom movements which began to flower in the 1960s and 70s.

Overall, I highly recommend the book as a text for an undergraduate course on American Politics, the Long Progressive Era, the Social History of Industrial America, or the Religious Left. In fact, it would also go very well alongside Dan McKanan's Prophetic Encounters in a course examining Religion and Politics in the United States. I could imagine a fun final essay questions which asked students to assess the utility of the term "liberal" for historians and laypeople alike.
Email Post
Labels: evangelical center/left janine's posts religion and politics religion and public policy religious left

Mark T. Edwards said…
Thanks for this introduction, Janine! I'm sorry I hadn't gotten to this book earlier as well, since Politics of Authenticity is a staple in my US surveys and foundational to my 60s class.
March 10, 2014 at 2:23 PM