Jewish on Their Own Terms: An Author Interview with Jennifer A. Thompson 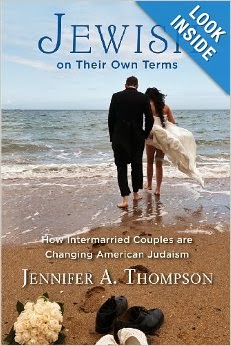 Jewish on Their Own Terms: How Intermarried Couples Are Changing American Judaism by Jennifer A. Thompson was published by Rutgers University Press in December of 2013. In it, Thompson explores the implications of interfaith marriage for American Judaism, with two chapters giving particular attention to Christian women taking the primary responsibility for raising Jewish children.

In these chapters, she argues that these women, and their Jewish husbands, are creating new way of participating in American Jewish life, firmly identifying themselves within the Jewish community but not necessarily aligning their own practices with broader communal norms. Thompson’s work, however, suggests that these families, and their alternative approaches, constitute a large enough presence in the American Jewish community to be changing the face of American Judaism, in terms of fundamental assumptions about individual autonomy versus communal responsibility, universal religious truths and their relationship (or lack thereof) to religious practice, and obligations to family and history.

Thompson, currently the Amado Professor of Applied Jewish Ethics and Civic Engagement and California State University Northridge, agreed to be interviewed for the blog over the past month. Thank you, Jennifer Thompson, for taking the time for this conversation. For full disclosure, Jen and I were both trained in Emory University’s Graduate Division of Religion and were fellows together at the Sloan Foundation’s Center for Myth and Ritual in American Life.

Jen, it was exciting to get to read your book, especially since I watched you research the dissertation and read it at that stage as well. It is an incredibly rich ethnography, and I can imagine any number of possible conversations, but I wanted to focus in on your work with the Mothers Circle. Can you begin by providing a bit of background on The Mothers Circle, what is and who participates?


Thank you! The Mothers Circle (http://www.themotherscircle.org) is an educational support group for non-Jewish women raising Jewish children. The pilot version of it took place in Atlanta at least ten years ago. The Jewish Outreach Institute (www.joi.org) administers the program at the national level, while synagogues, Jewish community centers, and Jewish federations sponsor their own local groups. There’s an active national listserv moderated by a JOI program officer. Local group leaders are usually paid instructors who use a curriculum provided by JOI. The instructors are Jewish women, but they are not necessarily institutional leaders such as rabbis. The logic behind the Mothers Circle is that women (or “moms,” as my informants usually called them) are the ones who make children Jewish, so teaching and encouraging women is the most sensible way to help ensure that there will be Jewish children. The Mothers Circle members I have met and whose listserv posts I have read tend to have children who are bar- or bat mitzvah age (12 or 13 years old) or younger. Most of them are from at least nominally Christian backgrounds, married to Jewish men. There are some who have been divorced from their Jewish husbands, but they are still trying to raise their children in Judaism. The Mothers Circle was conceived as a solution to many Jewish leaders’ concerns about the future of Jews as a distinct group and what they see as the role of intermarriage in causing the disappearance of Jews. Jewish leaders have frequently insisted that non-Jewish spouses of Jews convert to Judaism. This insistence has not yielded a lot of conversions. Rather, many intermarried couples resist being told what to do, especially when it involves religious action and belief, which they often see as a personal and familial matter. So the Mothers Circle takes a different approach, offering education about Judaism but not steering its students toward a particular path within their own homes and lives. Some Mothers Circle leaders feel that the groups should meet at a neutral space like a coffee shop or library so that their members won’t feel like they are being pressured to convert or join a particular Jewish institution. Other leaders seem perfectly comfortable with meeting in a synagogue or other explicitly Jewish space.

I find it extremely striking that the participants and the leaders take for granted that the husbands and fathers can dictate that the family home is Jewish, but then more or less abdicate responsibility for creating that Jewish home. Am I characterizing the dynamic correctly? How do the wives/mothers feel about that dynamic? You note that many of these mothers were educated women who had left careers to be homemakers. Did language of feminism enter into their descriptions—did they use it to justify or worry about their choices and roles?

This was one of the most perplexing puzzles that I encountered in my fieldwork, and I spent a lot of time trying to understand it especially because it was so alien to my own feminist perspective. I concluded that this arrangement seemed reasonable to them because it combined gender norms about religion with gender norms about household labor. Speaking in general terms, American culture continues to draw upon Victorian norms that assign the sphere of religion and domesticity to women and the breadwinning role to men. Women were, and are, expected to civilize men with their greater spiritual knowledge and skills. Likewise, sociologists find that women do more household drudgery like cooking and cleaning than men do—and both men and women justify this by saying that it’s the women’s choice to do it. The term “feminist” never came up, and no one I encountered in my fieldwork offered any kind of gender analysis of their experiences, but as anyone who has ever read a “mommy wars” article in the New York Times already knows, the mere use of the term “choice” allows people to characterize what they’re doing as feminist if they want to. That being said, even without a gender analysis, there were women who were upset because they felt that it was unfair that they should have to give up Christmas or other Christian celebrations that they loved. They were particularly frustrated with this when their husbands couldn’t explain coherently the problem with Christmas or Christianity. And these women also felt offended that their sacrifices weren’t recognized by their Jewish family members. But these issues were at a personal level. When the women took a broader view of their situations, they explained them as fair and ethical. For example, they would argue that because of the Holocaust, it was most fair to raise their children as Jews because there were fewer Jews than Christians in the world. This didn’t have anything to do with the gender issue, but it was how they explained why this was fair.

So the sense, then, is that on the micro-level, the family has the ability to correct or combat macro-injustice? But the macro-injustice of concern is anti-Semitism, not gender inequality?

Yes; the family’s choices definitely take place in the context of the larger social world and its problems. Some families did focus on gender inequality more than Jewish survival, and this also came from the women more than the men. In these families, each parent took responsibility for transmitting his or her own religion to the children. They valued Judaism, but they didn’t think that the non-Jewish parent’s background or the children’s ability to connect to it should be erased. And they felt that all religions teach the same values, so that even if their children did not identify with Judaism, or only with Judaism, the children would still be good and ethical people.

Can you point to ways that this Judaism, mediated by Christian women, with Christian understandings of religiosity, strikes you as different than American Judaism otherwise?

The majority of American Jews are liberal (i.e., non-Orthodox), so the relevant comparison here is between the Mothers Circle families and other liberal American Jews. The Mothers Circle families are generally doing everything they can to fit into the mold of normative American Judaism. If you look at the description of “moderately affiliated” American Jews in The Jew Within, which does not focus on intermarried Jews, these average Jews care about the same values that my informants do—autonomy, individualism, and family and the Jewish people. So what’s important is actually how similar this Judaism is to American Judaism more generally. This similarity is especially important because journalists and many social scientists point to survey data that they say show that intermarried Jews behave and think differently than endogamous Jews, and that this difference shows that intermarriage is going to lead to the disappearance of the Jewish people. Survey data do not give us insight into the context and meanings of people’s choices, but in American Jewish public discourse these survey data are treated as if they are a definitive source providing everything anyone needs to know about American Jewish life. There is so much more to American Jews and Judaism than surveys can capture, and I am grateful to have had the funding—mainly from non-Jewish sources—to do ethnographic research that helps fill out the picture.