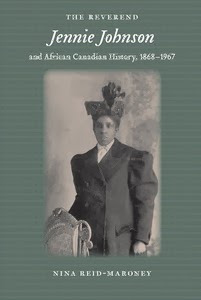 Today's guest post is by Nina Reid-Maroney, Associate Professor of History at Huron University College at the University of Western Ontario in London, Ontario. Her book,The Reverend Jennie Johnson and African Canadian History, 1868-1967, was published in the Gender and Race in American History series at the University of Rochester Press in 2013.

Jennie Johnson (1868-1967) was an African Canadian Baptist preacher, the first woman in Canada called as an ordained minister “publicly consecrated to SACRED SERVICE, “ as her certificate of ordination proclaimed, “authorized to preach the Gospel, administer its ordinances, assume its responsibilities and share the honors of the Christian Ministry.”  Born in a rural black abolitionist settlement in Chatham Township (near the present-day town of Dresden, Ontario) Jennie Johnson lived through a century, from the era of Reconstruction to the modern civil rights movement. She co-founded a Baptist congregation at the age of sixteen, received her theological education at Wilberforce University in the 1890s, founded churches in Ontario, established an inner city mission in Flint, and was an active member of the Michigan Freewill Baptist Convention-- one of the only black women in this predominantly white association in the early years of the 20th century.

Her ordination preceded by a generation the ordination milestone for women in the liberal United Church of Canada, and placed the Reverend Johnson in a position of religious and civic authority years before women in Canada had the right to vote, before the first woman in Canada was appointed magistrate, before the Privy Council’s decision that women were indeed to be considered “persons” under the British North America Act.

Despite this extraordinary life, Johnson’s has largely been a legacy of silence. The “neat brick church” that Johnson built in 1915 remains at its rural crossroads in Southwestern Ontario, but the church’s cornerstone bears the name of someone else. My introduction to Jennie Johnson came from a small notation on a Black History Month poster circulated by the North American Black Historical Museum of Amherstburg. The realisation that I had grown up a few miles from her birthplace without ever having heard her name was the beginning of The Reverend Jennie Johnson and African Canadian History, 1868-1967.

Viewing African Canadian and African American history through the lens of Johnson’s experience opens a striking landscape, and fresh ways of looking at familiar figures—including Mary Ann Shadd Cary, or Josiah Henson, Johnson’s neighbour—who are often expected to stand in for the whole of African Canadian experience. Johnson’s complicated and cross-border life raises new questions about the intersections of racial and gender identity, and religion. It also reveals the way such intersections formed and re-formed to create a regional black culture across what Afua Cooper calls the “fluid frontier” of the Great Lakes borderlands.[1]

Steven Hahn has argued that free black communities in the antebellum North were connected, not just to one another, but to the culture of slavery, through “circuits of communication and experience, interconnected processes of negotiation and agitation, [and] much deeper wells of aspiration and practice” than is generally acknowledged. Hahn argues for the importance of free northern settlements as “important political meeting grounds and as sites for the construction of new black politics” where fugitives from slavery, as well as those in “putative freedom,” from wide backgrounds and of varied experience, forged new paths of resistance and agitated for slavery’s demise.[2] Applied to the Canadian setting, a similar argument centered on free black communities, white supporters, and their work across racial lines can transform our understanding of antislavery ideology, politics, and action.  Jennie Johnson was the product of a distinctive culture of liberation that characterised African Canadian settlement and antislavery work in exile.

The community to which Johnson’s grandparents were drawn in the 1840s was both a remote backwater of the British Empire, and a central point of connection in the transatlantic antislavery movement. In the nineteenth century, the language of redemption in the “promised land” of Canada was so highly charged that it required no explanation beyond itself, even when the promise remained unrealised. Since Johnson’s time, however, the religious and ideological world at the heart of African Canadian settlement has all but disappeared in historical accounts that begin and end with the Underground Railroad. One of the consequences of recovering Jennie Johnson’s story is the restoration of a more complicated African Canadian religious and intellectual history, in which Christian egalitarianism provided strong sinews of connection between the abolitionist foundations of nineteenth-century and the movement for racial justice in the twentieth.
In addition to highlighting the importance of a cross-border African Canadian history beyond 1865, Johnson’s story invites a revisiting of the ordination question, and its potential to reorient women’s relationship to Christianity in ways that face the paradox of its conservative tendencies, and its transformative power.  A life spent defying what she once called “the coldness of manmade regulations” gave Johnson an understanding of the carefully interwoven boundaries of race, gender, and national identity. She saw her ordination as the power to cut through those boundaries and to make her own way.  In her time, Johnson’s ordination to the Christian ministry was a revolution nurtured in the straitlaced heart of Baptist orthodoxy; in our time, knowing about her ordination helps to overturn long-accepted assumptions about women, Christianity, and race in North American history.