Know Your Newsmakers: A Review of The Oxford Handbook of Religion and the American News Media

We who study American religious history have access to abundant media sources for our research and teaching. With digitization, this bounty grows daily. Yet the wide availability of print, audio, and visual documents tends to divorce their content from their original contexts. I can easily summon an old magazine article from a library database, but the text that appears on my screen tells me little about the author and editors behind it, the periodical in which it appeared, what ads or other articles appeared near it, or who might have read it. That information could matter a great deal as I try to interpret the text, especially if I'm wondering whether the article was representative of its era, the periodical in which it appeared, the thinking of a large group of people--or, really, anything other than the singular vision of its author. 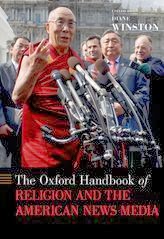 A great resource for approaching those questions appeared in 2012, The Oxford Handbook of Religion and the American News Media, edited by Diane Winston. Winston, who holds the Knight Chair in Media and Religion at the Annenberg School for Communication and Journalism at the University of Southern California and serves as the director for Religion Dispatches, brought both academic and journalistic credentials to the project. The nearly 40 contributors to the volume also brought expertise in a number of fields. Some of the names will be very familiar to RiAH readers (Anthea Butler, Darren Dochuk, Kathryn Lofton) while others, particularly those from media studies fields, will be new acquaintances. The fact that historians of religion typically don't read media studies scholarship is one of the problems this handbook addresses.

One example will illustrate why background knowledge of media operations is important for religion scholars. The appearance of a religious figure or trend on the cover of Time magazine is often taken as evidence of that figure or trend's importance in American culture at large. (Think of the iconic 1966 "Is God Dead?" cover, now used as a shorthand reference for a decade of doubt.) Time is, after all, a secular news magazine, not the Harvard Divinity Bulletin. But, as several contributors to the handbook pointed out, the founder of Time, Henry Luce, was anything but a neutral observer of American religion. J. Terry Todd wrote in the chapter "Mainline Protestants and News Narratives of Declension,"

Luce was nonetheless thoroughly enmeshed within an elite Protestant world. ... Luce made sure that Time promoted Protestant theologians as key figures in the postwar revival of American intellectual life. Whatever men like Reinhold Niebuhr, Harry Emerson Fosdick, and Paul Tillich said in their books, from their pulpits, or in their classrooms was news, according to Luce.

When Tillich appeared on the cover of Time in 1959 with the grandiose headline, "A Theology for Protestants," then, it was not an indication that Protestants in general were flocking to Tillich. That conclusion may or may not be true. All the cover signaled was that Luce really liked Tillich and wanted to use the considerable influence of Time to promote him.

Shedding light on the social location and internal logic of media was the handbook's stated goal. Winston noted, in the introduction, "Media is to society ... what water is to fish: a taken-for-granted yet all-encompassing environment that shapes beliefs, behaviors, and social interactions." The volume analyzed this water in chapters under six headings: History, with chronological chapters from the 18th century to the post-9/11 world; The Media, with chapters on late-night comedy, print, radio, TV, and online news; Religions, with case studies on representation of traditions as diverse as Orthodox Judaism, Sunbelt Evangelicalism, and Wicca; Issues and Beats, with looks at coverage of topics like Creationism and alternative medicine; International Coverage, with chapters on the ways American concerns shape presentations of distant events; and The Religious Press, where chapters turned from "mainstream" press coverage of religion to the dialogues within religious news outlets.

As is to be expected in such a large and varied volume, there's some repetition, a few factual quibbles, and instances in which disparate styles and approaches make it difficult to trace a topic from chapter to chapter. The case study format of the bulk of the chapters is hit or miss, in terms of matching up to a reader's research interests. But Winston and her contributors are utterly persuasive in their contention that the currents of the media "water" are so strong that religion scholars need to be aware of them, lest they expose themselves to a version of Inigo Montoya's immortal criticism: "You keep using that headline, or magazine cover, or video clip. I do not think it means what you think it means."