I'm pleased to guest post this from my two colleagues down the hall from me, Jeffrey Scholes (who previously posted here after his beloved Rangers just missed winning the World Series a couple of years back) and Raphael Sassower, from the Philosophy Department at the University of Colorado. They are the co-authors of a brand new book just out with from Routledge, Religion and Sports in American Culture. The eyes of Tebow, or of Richard Sherman, are upon you. 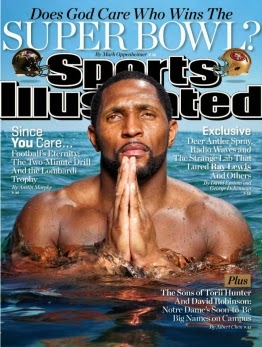 The headline of a survey released by the Public Religion Research Institute in mid-January “Half of American Fans See Supernatural forces at Play in Sports,” was sure to catch some attention. Eyes must have rolled at the ridiculous suggestion of God intervening in an event that has millionaires running around, trying to catch a piece of leather. Reggie White was either confused or calculated when he claimed that God told him to play for the Green Bay Packers. Yet some nod approvingly at that headline— of course God listens to prayers and is involved in all of creation, so there must be supernatural forces at work on a football field. In between these two sets of reactions is a larger group that may not be willing to drag the divine down into the dirt of a playing field yet refuse to restrict the divine from doing so.

Knowing that theologically crass questions, such as the one asked on the pre-Super Bowl 2013 edition of Sports Illustrated “Does God Care Who Wins the Super Bowl?” generate a range of emotions (that in turn generate magazine sales), we shouldn’t be surprised that the relationship between religion and sports elicits one’s own theology.

The unlikely rise of vocal Christian, and then Denver Bronco, Tim Tebow, evoked a range of reactions two years ago heretofore unseen. From David Brooks’ assertion that the relationship between religion and sports comes down to the values that are honored in players and fans alike to Chuck Klosterman’s claim that Tebow “makes blind faith a viable option,” we see that removing religion altogether from sports (as Ross Douthat’s “sophisticated Christian” attempts to do) is difficult even for the hardened skeptic. Wherever you look, religious ideals and practices find expression in all cultural phenomena, though we are limiting ourselves to sports here.

More to the point, a closer look at the PRRI survey tells a different story than the one manufactured by Sports Illustrated.  What leads the compiler of the evidence to deduce that a majority of Americans believe that “supernatural forces” are involved in sports? One, a sizeable percentage (25% of those surveyed) believes that their team may be cursed. Does this mean that they really believe in Satanic forces that stymied Bill Buckner in 1986? Or that God or gods are actually cursing their team for some sin committed in the past, such as disallowing a man to enter the 1947 World Series with a billy goat? When something so strange or unnatural goes on with a team, perhaps we need religious language to describe it. Two, 21% of all fans “perform pre-game rituals or game-time rituals.”

Does everyone (or even a majority) in this group actually believe that some supernatural force is taking account of what they are wearing, making sure that it corresponds to the orthodox ritual, and then rewarding the fan’s team accordingly? Did Michael Jordan believe that God would prevent the basketball from going in the basket if he forgot to wear his North Carolina uniform underneath his Chicago Bulls one? Of course not! Superstitious behavior in sports is probably closer to the act of hedging a bet—a bet that is made tongue-in-cheek; not Pascal’s Wager. To classify ritualistic or superstitious behavior as believing in the intervention of supernatural forces is misleading at best. 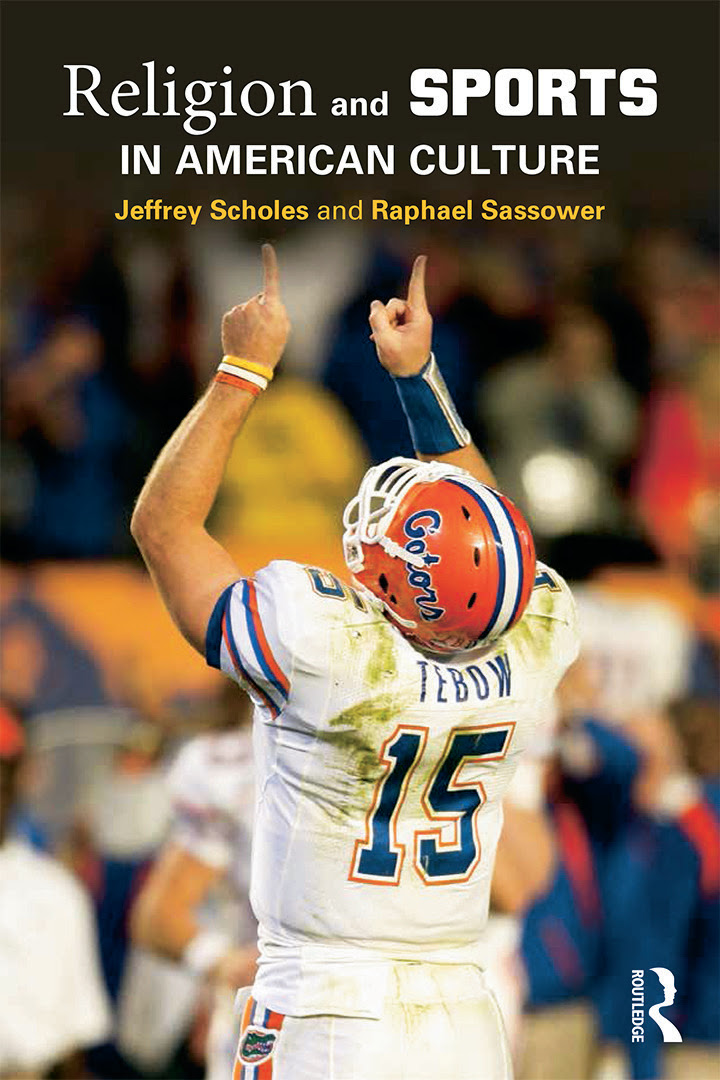 However, the survey shows that religion and sports come together for many fans; just not in the ways that one might think. A better way to think of this relationship is that ritual and belief are concepts used by both religion and sports in order to aid in the understanding of the workings of the world—making reference to same reality. Our book, Religion and Sports in American Culture (Routledge 2014), attempts to find cross-fertilization between religion and sports around a variety of traditionally religious concepts. Yet in order to avoid the sentiment that the sacred and secular cannot be so intimate with each other, we examine the relationship between them from an atypical, culturally-informed angle.

From what we have mentioned in the popular media and the recorded surveys that inundate us about how religious Americans remain, despite a profound process of secularization that dates back to the Enlightenment, we have concluded that “postsecularism” is probably the right conceptual description of contemporary American culture and the behavior displayed on television screens and in the privacy of our homes.

Postsecularism is a variant of postmodernism and thereby captures the spirit of how secular and religious practices coexist. If at one point it was believed that the secularization of American culture—including the designation of sports as the American Religion—would overshadow if not overtake any traces of religious belief and practice, it has become evident that this process did not and perhaps cannot fully undermine the strength and popularity of religion. Like postmodernism that acknowledges the hold that modernism still has on the conceptual organization of our world—from an appeal to a cognitive foundation and the criteria by which we judge everything—postsecularism appreciates the “both and” logical connection between the secular and the religious, between the divine and the mundane. Popular culture and its expressions in popular media remind us of this (bewildering) reality.

And, of course, when sports and religion meet on the television screen or the pages of the Internet, it shouldn’t be surprising (with postsecularism in mind) that they inform each other—with historical antecedents and verbal cues—rather that claim exclusive authority to render judgment on God’s presence in the Super Bowl or the teams that are blessed or cursed. In short, postsecularism has performed an invaluable intellectual function in undermining a perceived (and real at times when biology textbooks are contested in some school districts) struggle and antagonism between the religious and the secular in contemporary culture.

In our book we attempt to systematically survey seven sets of comparison between the religious (admittedly limited to the Judeo-Christian Bible) and the sports-world responses to concepts such as belief, sacrifice, work, relics, pilgrimages, competition, and redemption. In each case, we provide the textual and theological underpinning of these concepts, their centrality for the Judeo-Christian tradition (with obvious points of difference between the two religious traditions), their significance in various athletic activities and the ethos that underlies them, and the contemporary interpretations that were undertaken by the likes of Augustine and Calvin on one end of the spectrum, all the way to Karl Marx and Max Weber on the other.

What becomes clear from our perspective is the fact that previous approaches to the relationship between religion and sports—the historical, sociological, economic, and psychological/personal—fall short of the profound appreciation that these two cultural phenomena aren’t reducible to each other. Without a reductionist methodology at work, the idea that the one (religion) is (logically or chronologically) prior to the other (sports) makes little sense; likewise, the idea that one of these cultural institutions (structurally or linguistically) depends on the other is too simplistic. Instead, we offer a more nuanced and rich intermingling of these phenomena within the context of contemporary capitalist culture. Once understood culturally and in terms of the reality of postsecularism, certain apparent confusions or puzzling survey results can be more fruitfully understood.

We can go to church on Sunday early enough to be able to go to the stadium later; we can feel the camaraderie of fellow congregants just as strongly as our fellow fans (and vice-versa). We can love our team and its quarterback this Super Bowl without having blasphemed Jesus. If anything, the one practice and set of rituals informs the other, and we import from one context to the other almost seamlessly. There is always room at the inn and all are welcome under our expanded (revival and sports) tent.
Email Post
Labels: guest posts religion and popular culture religion and sports