Winning the Internet: Religion, Media, and Digital Humanities at the AAR 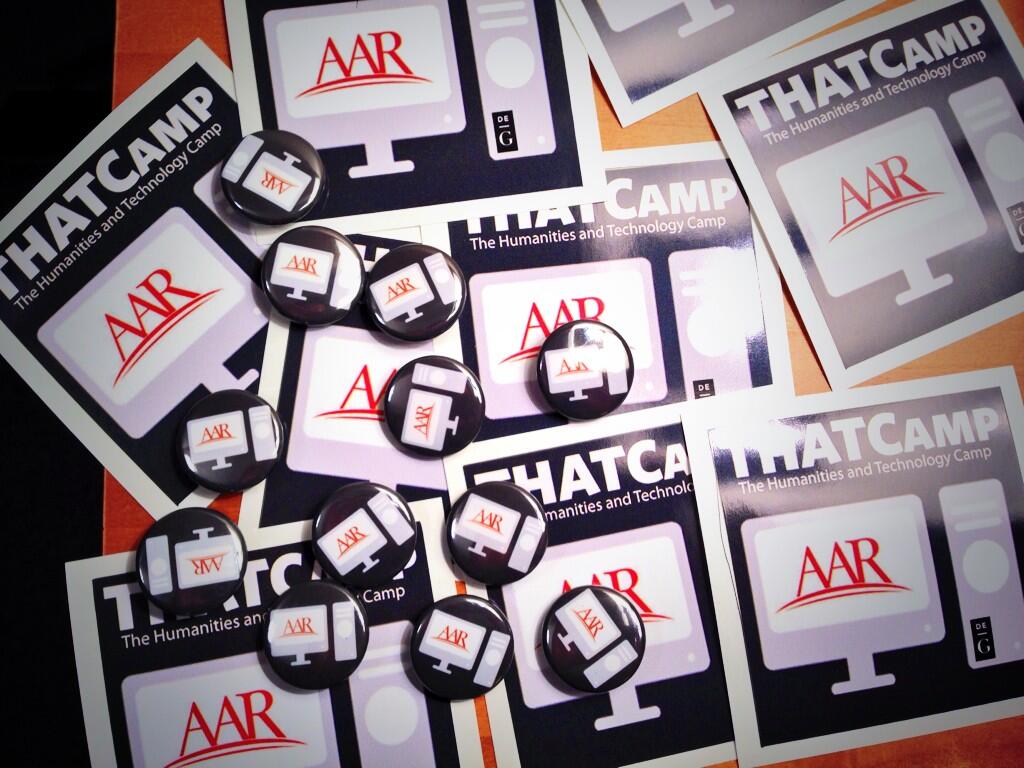 The American Academy of Religion estimates that over 10,000 people regularly attend its annual meetings. But at the AAR's gathering in Baltimore last month, I had the good fortune of spending a day with seventy participants who came early to participate in the AAR's first ever THATCamp. Unlike traditional academic gatherings THATCamps, which stands for The Humanities And Technology Camp, have no predetermined proceedings. Rather, participants propose the kinds of sessions they would like to attend in the weeks leading up to the camp so the day's events reflect the needs and interests of those in attendance as much as possible.

The day, I think, was a resounding success. This was in no small part to the people who made THATCampAAR happen. The AAR was unendingly generous in providing us with space, wifi, and audiovisual equipment; DeGruyter Press provided everyone with swag and the most expensive cups of coffee in the world; and the organizing team of Kristian Petersen, Mike Altman, Hussein Rashid, Jeri Wieringa, Kelly Bulkeley, and Dave McConegy were all great to work with in pulling this off. But by far it was the campers that made THATCampAAR such a success. In addition to a number of preplanned workshops, we had sessions on the digital publication of religious studies scholarship, building DH teams on campus, teaching religious history with web-born resources, and a vibrant discussion on what a manifesto for a digital religious studies would look like. By the end of the day I was as invigorated as I was exhausted. Check out the camp's #THATCampAAR hashtag to see just how vibrant the day was.

But at the AAR this year THATCamp was only the beginning of a much larger
conversation about the ways technology is transforming the religious worlds people make and the scholars who study them. Saturday evening, for example, featured an excellent panel that pulled together a number of writers who engage with  online from very different perspectives. Organized by Kathryn Reklis, the panel included everyone from the editor of the Social Science Research Council's many learned digital publications Jonathan VanAntwerpen, to the director of the Huffington Post's more raucous Religion page Paul Raushenbush; from Diane Winston, the director of Religion Dispatches' longform journalistic pieces, to Kathryn Lofton, a curator of the Frequencies project's more critical and theoretical reflection pieces. The result was one of the more interesting panel exchanges I've seen, which all came to a head the moment when Raushenbush delcared the intent of HuffPost Religion was to "win the internet."

Writing over at his own blog A Lively Experiment, THATCampAAR co-organizer Dave McConeghy has published a thoughtful reflection upon the issues at play in this panel, which I've excerpted at length below. It's a great primer for the debates I hope we continue to have as scholars of religion who work in a digital age.

Raushenbush made an excellent case for why it is vital for someone to want to “win.” It is necessary, he said, to preserve the quality and integrity of information. This is the internet as the Wild West. Can a dark stranger ride into town and save the day? Will they bring righteous violent justice? Will they offer tempered lawfulness? In short, will our savior be benevolent?

The issue with HuffPost, as so many colleagues perceive, is not just the danger of a for-profit journalism source funded by tabloid gossip. It is the danger of a consensus by what so often appears to be mob rule or whimsy or click-bait. It changes content—“explainer” pieces are the HuffPost’s most popular—and it changes the kind of people who are entitled to create the content. In some ways, what HuffPost has done for content and creator is radically progressive. They put basic educational content, often by insiders, at the forefront. That has value.

The desire to win, however, strikes me and many others as off-putting. Is religion something we win with? How does that make our scholarship any different than evangelism? Or in less coded language, aren’t we risking putting the popular reception of our work ahead of the work?

Then again, perhaps one of the reasons the humanities is in so much trouble (and the academy generally) is that we haven’t fought to win. [I’m not even sure we all agree that we’re playing the same game.] We’ve been content to pretend that sincere work merits attention on its own, and we have far too often forgotten to frame that work in a way that will attraction attention. This is more than vinegar and flies. Playing to win means taking control of the rules of the game. HuffPost undoubtedly uses meta-tagging and writes its posts to please search engines. Search Engine Optimization is a part of the game that can be rigged and cheated....

The crucial thing about the New Media, however, is that if it is really attempting to win the internet, then its questions have become the kind that make truth claims possible for authors. We have room to make these as secular citizens writing about religion. It is no longer the domain solely of religious believers to make explicit the faith claims of their analyses. (Sure, ethnographers have been doing this for longer, but religious studies has always had a confessional problem.)

Winning in the new media means asking questions that are winnable. As far as I can tell, those questions aren’t the ones that we’ve been trained to ask. This placed us (religious studies) at a disadvantage. We’re on our way to overcoming it. We’re certainly not there yet, nor do we want to casually let others determine where we end up.

So take this time to consider your participation in the new media’s reconstruction of discourses about religion. No doubt some are exceedingly positive; others have hidden risks that reveal the costs of this new landscape. Explore freely, but tread carefully. And don’t forget to SEO your site.
Email Post
Labels: AAR chris cantwell's posts conference recap digital history digital humanities guest posts religion and new media

Yvonne said…
...it was a great meeting, and I hope to see many more like this as time goes by. Thanks for your hard work. I certainly hope that Religion can "win" the internet; right now I wonder if the discipline/field is merely "bringing up the rear" in the digital humanities. Thanks for being on the front lines.
December 9, 2013 at 11:19 AM

Unknown said…
Thanks, Yvonne. It was so great to finally meet you too! Your session on team building was so valuable to me. We'll have to keep in touch to see how our campus relationships grow!
December 9, 2013 at 7:50 PM

Unknown said…
When people stumble upon their religion I think it is mostly because the ask "why". I think that is a great question to ask all of the time and not just about religion but why things work.
December 12, 2013 at 11:32 AM