Religion in a Family's History, a repost 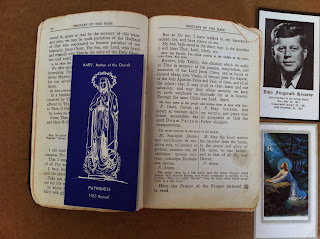 My parents are getting ready to sell their house and downsize. This means going through and packing lots of stuff. Some finds have been funny – including "books" I wrote when I was 7. Every piece has a story. We found my great-grandfather's framed certificate acknowledging his promotion to 32nd degree mason in the Scottish Rite from the late 1920s. My mother's pre-Vatican II missal from her childhood shows the wear of a book used lovingly, dutifully, and devoutly for years. It was full of holy cards for her grandparents, JFK, Pope John XXIII, a friend who died in Vietnam. Two of those holy cards were for my great-grandmother Stella, which reminded me of a story I shared on this blog a couple years ago. I've re-posted it below. Enjoy and Happy Holidays!

A secret infant baptism orchestrated by a “formerly” Catholic wife who renounced her faith when she married into an anti-Catholic family sounds like a plotline to an early twentieth century soap opera. And it makes me think of my family. My family may not be Italian, but my great-grandmother Stella Foster Myer was a sort of German version of the“immigrants’ daughters” that Robert Orsi’s earlier work focuses upon, because Stella too was caught between early twentieth century tensions of family and religion. 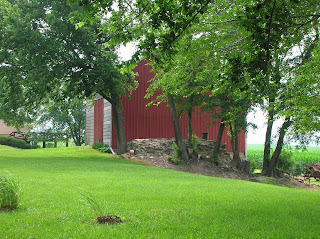 Stella Foster was born in 1898 to a very Catholic, very German immigrant family on a Midwest farm. As she grew up, she considered becoming a nun – an idea further enforced by remaining single for as long as she did. In 1922 she married my great-grandfather Paul Myer, a 25 year old son of German immigrants who were Lutheran and anti-Catholic. (The picture is of the renovated barn at the farm where Stella and Paul raised their family, circa now). When my mother first told me this story, my immediate question for her and her older sister was: how on earth did Stella and Paul meet, let alone engage in a courtship? The simple answer is that they were neighbors. The Foster family lived on a farm south of Topeka, Kansas down the county road from one of the Myer family’s farms. Stella and Paul’s marriage may have been a bit of one of convenience at its outset – they married “old” for the small-town early 1920s – but my aunt in particular remembers seeing her grandparents engage in light-hearted teasing indicative of a strong bond.

The marriage of these two families was not without conflict. In addition to religious differences, class and education divided the families upon arrival in the US. The Catholic Fosters were from a rural, mountainous region of Germany, without much education, and with little financial stability. The Myers were their opposite in class and education, and they were also Lutheran and anti-Catholic. Stella certainly married up the social ladder and not without notice. The Myer family required Stella to give up being a practicing Catholic, and for a woman who had danced with the idea of convent life, this decision could not have been easy.

Shortly after Stella and Paul’s eldest child, their daughter Roberta (my grandmother), was born, Stella and her Irish, Catholic sister-in-law Ellen Foster decided to have her baptized … secretly. On one Sunday afternoon before Roberta’s first birthday, Stella casually went into town with her to meet up with Ellen while Paul stayed home. Stella and Ellen took Roberta to a Topeka Catholic Church and had her baptized.

Afterwards, Ellen and Stella told no one. Roberta had no idea she was baptized and would later describe to my mother that she was raised in a non-church going but Bible-reading family. Upon her engagement to a Catholic, Roberta began classes to join the Catholic faith and would only now learn of her baptism. Unfortunately for my historical curiosity, neither my mother nor her siblings know how Paul felt about Roberta’s secret baptism. Nor are they sure if Roberta’s younger siblings were baptized, as neither married Catholics. So it’s quite possible that Stella only baptized her first child.

This story makes me think about the lived experiences of immigrant Catholics. In addition to Catholicism, Stella’s story engages issues of immigration, class, intolerance, practice in private and public spheres, and even married life. If American Catholics created their own Catholic “cocoon” in the wake of 19th century anti-Catholicism, the Americanist Controversy, and the “brick-and-mortar” Catholicism that followed it as Martin Marty has argued, Stella’s story touches upon the experience of leaving that cocoon publically but remaining tied to it privately at least on one ordinary Sunday afternoon.
Email Post
Labels: catholicism emily's posts religion and immigration religion and the family reposts

Dr. Ron Ross said…
A fascinating story. Thanks for posting it. I'm passionate about people preserving these kinds of stories and is why I wrote, "How to Record Your Family History." Would be happy to send you a free copy (pdf) if interested.
December 25, 2013 at 9:59 AM