From the Rivers of Water to the River of Dark Dreams 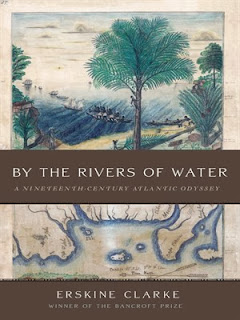 As Erskine Clarke begins his most recent book, Paul, a slave, looks from a rice plantation across the Savannah River to the busy docks of the city of Savannah. Clarke describes life on the plantation and in the city for Paul, a carpenter, as Paul worried whether he would be sold away from the Bayard family that owned him and the other slaves on Hamilton Island. It is not until the end of the second chapter that we learn what has troubled Paul: the soon-to-be minister John Leighton Wilson's arrival in Savannah in 1832 and engagement to Jane Bayard, the woman for whom Paul was owned in trust. In a master stroke of suspense, Clarke thus manages to introduce his readers to the intertwined lives of several of the main people in his narrative.

Even in these opening pages, readers who have encountered Clarke's earlier book, the Bancroft-prize-winning epic Dwelling Place, will note the hallmarks of Clarke's signature style. As in that earlier work, Clarke reconstructs historical lives and places with minute attention to the details of relationships between people. But where Dwelling Place took place mostly in Liberty County, Georgia, Clarke's By the Rivers of Water follows the Savannah River---and John Leighton Wilson and Jane Bayard Wilson---into the Atlantic Ocean and all the way to missions in Africa. Leighton and Jane became missionaries under the American Board of Commissioners for Foreign Missions in Cape Palmas in Liberia, then later in the Gabon Estuary. What we get in this book is a history that follows the Wilsons, as well as freed slaves who traveled to Liberia, from South Carolina and Georgia to West Africa and back again to New York, Boston, and elsewhere in the United States, cutting across the histories of slavery, colonization, missions, nullification, abolition and opposition to the slave trade, and the Civil War.


Erskine Clarke may very well be the best writer of narrative working in American religious history. His method is what Clarke calls "disciplined imagination" (xiv). This discipline is above all to the primary sources. It would be strange to praise Clarke's work for depth in the primary works, since this is the minimum for acceptable work in the discipline of history. Still, Clarke's method is like intensive agriculture, turning up every bit of the soil and maximizing the yield. The other part of the discipline is immersion in the secondary works on American slavery and religion. Each paragraph of the work is as much indebted to that lifetime study of the secondary work as to the deep analysis of the primary sources. This work is, in short, a model of how to write narrative history that is not excessively dependent on colleagues' works but nevertheless uses them at every turn. This discipline serves his imaginative reconstructions of places and people, and above all of social interactions.

This mode of narrative is not without compromises in this particular work. The narrative hovers over the Wilsons at more or less the same height throughout the book, so we seldom get a chance to pull back and see the entire world through which they are traveling. For example, the book only discusses what it meant to live in a huge Atlantic world in bits and pieces: that meaning is mostly in the aggregate of the smaller details rather than synthetically discussed. And frankly, the book could have been shorter. In recounting the wearying round of daily labor, and of establishing two mission posts, the book bogs down in some of the middle sections because of the unvarying nature of the narrative. But perhaps those moments of tedium too are part of the narrative genius of the work, since they convey what must have been the tedium of the Wilsons' lives. I am willing to believe that the slowness of parts of the book are due more to my shortcomings as a reader than to Clarke's craft as a writer.

It is not easy to place By the Rivers of Water within a historiographical niche. Because of the way that Clarke writes his narrative, there are no historiographic discussions, nor does the book aim to advance any one field. Rather the book cuts many categories---the Atlantic World, slavery, missions, religion---that different readers will find the book useful for different reasons. I came to this book for its treatment of American missions and of African-American and African religious experience, and was fascinated to learn details such practices of communion within the mission and how the Wilsons (like other ABCFM missionaries) named African converts after prominent donors or spiritual models. I can't help but compare this book to another recent work on American slavery, Walter Johnson's River of Dark Dreams: Slavery and Empire in the Cotton Kingdom (reviewed here, and many other places). Both works have rivers in their titles, and the similarities run far deeper than that coincidence. Both works rely on narrative to reconstruct and recount the history of slavery. Both works elaborate the inner workings of systems: the family, plantation, and mission, in the case of Clarke; the capitalist system of slavery, in the case of Johnson. But in another sense, are as far apart as the "rivers of water" from the Psalms seem to be from exploitation of slaves on the muddy waters of the Mississippi. If I can sum up the difference in a word for each, Clarke's book is personal, and Johnson's book is abstract. That is to say, everything in Clarke's book is tied to some person, and told from his or her perspective; everything in Johnson's book explains how capitalism turned realities like land, crops, and people into the abstractions of the capitalist marketplace. Historians of religion more naturally gravitate to Clarke than to Johnson, and we all have something to learn from Clarke's craft. But most histories of religion that deal with the history of capitalism cover the twentieth century. It remains for religious historians of the nineteenth century to account more fully for the pervasive influence of American capitalism.
Email Post
Labels: 19th Century Africa Atlantic World capitalism Erskine Clarke lincoln's posts religion and slavery reviews