David Morgan is the latest to take part in our “Four Questions with” series.  His influential and acclaimed work on religion and visual culture will be familiar to many of our readers.  Morgan is Professor of Religion with a secondary appointment in the Department of Art, Art History, and Visual Studies at Duke University.  He is the chair of the Duke Department of Religion as well. 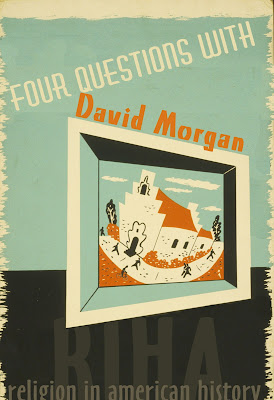 He has written a range of books and essays on the history of religious visual culture, art history and critical theory, and religion and media. His latest book is The Embodied Eye: Religious Visual Culture and the Social Life of Feeling (California, 2012). He is also the author of Visual Piety: A History and Theory of Popular Religious Images (University of California Press, 1998); Protestants and Pictures: Religion, Visual Culture, and the Age of American Mass Production (Oxford, 1999); The Sacred Gaze (California, 2005); and The Lure of Images: A History of Religion and Visual Media in America (Routledge, 2007).  Books that he has edited and contributed to include Religion and Material Culture: The Matter of Belief (Routledge, 2010) and Key Words in Religion, Media, and Culture (Routledge, 2008).

Three weeks into my first job, at Valparaiso University, I was introduced to a collection of images by Warner Sallman. It was a moment of revelation because suddenly, looking at his ubiquitous “Head of Christ,” I re-wired my neural network and began thinking about a new way to do religious history. I had been trained as a historian of art with an emphasis on art theory. It’s fair to say that occupies the opposite end of the intellectual universe from popular devotional visual culture. I began to think about issues involving production, distribution, and reception. My focus shifted to mass culture, from fine art to visual culture, archives, and inexpensive stuff. The biggest difference was an abrupt change from studying high-brow aesthetic objects to the worlds evoked by mass-produced lithographs, tracts, and bible illustrations. 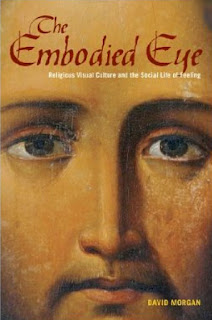 Morgan: We pay much more attention to everyday things—to music, to clothing, to images, to food. We are not stuck on fine art or geniuses or blue chip theologians or grand narratives or the Protestant mainstream, or any notion of a “dominant culture.” We have learned more about other religions, about cultural geography, about ethnography, and about how these methods and conceptual shifts re-shape objects of study in the field vaguely called “American religion.”

I think historians are much more comfortable with messiness, instability, impermanence, and multiplicity nowadays. I think one of the biggest changes is that historians no longer tend to think of themselves as voices on high, speaking to the nation. I also think one of the biggest differences is that younger historians are very tech-savvy. They work with large data sets, with digital technology, with blogs and Internet resources. They plunge into archives with all kinds of instrumentation to assist them. They like media and are good at using it.

Morgan: Theory is a great tool, but a lousy end-in-itself. Honestly, I think theory-wonking is pointless. But there is nothing so consequential as the creative revelation that happens when a theoretical model allows us to see our evidence, our questions, and our field with new eyes. It’s like waking from sleep. Suddenly, the world is much richer. So it is very important for doctoral students to endure theory seminars. It’s a vital rite of passage. It shakes them up, challenges them to recognize the importance of the critical interrogation of the métier they are struggling to master. It’s part of the disciplining that makes for good scholars.

We should always read widely and we should be smartly challenged by our students and colleagues. Academics easily miss how dogmatic they can become. I see it all the time. The older we get, the less risky we become. Historians are among the worst in this regard. There is something about the work of historians that makes them theory averse. I’m not sure what it is. I guess they are so taken by their subject-matter and the often deft way they are able to write about it that they mistrust theoretical engagement. But we need not choose between good prose and theory. It is quite true that some of the worst writing in the last century has come from high theory types. But that is no excuse to avoid their work.

Morgan: I am just completing a book, delivered last year in England as the 2012 Cadbury Lectures at the University of Birmingham. The book is a visually-driven history of Catholicism and Protestantism since the sixteenth century. When I’m not working on that, I’m busy with several new essays that seek to apply network theory to the study of religious material culture.
Email Post
Labels: author interviews david morgan four questions with interviews material culture material religion methods and theory randall's posts