Declaring a Truce in the War on Christmas

The Christmas season—the most wonderful time of the year— elevates the modern standoff between traditional faith and rising skepticism. For religious conservatives, winning the “War on Christmas” may require a form of Christianity that is neither captivating nor consistent with the celebration of Christ’s birth. In fact, threats to a commercialized and culturally-defined holiday may strengthen Christmas by drawing attention to a more compelling faith. 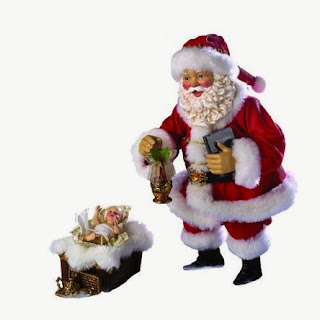 Christmas errands recently sent me in search of wrapping paper, decorations, and holiday cheer to wonder as I wandered through the halls of the local hobby and craft mega store. And suddenly, what to my wondering eyes should appear, but a statue of Santa, kneeling before the baby Jesus in a manger (there are many Santa & Jesus products available for your gift-giving needs). This combination of cultural and religious Christmas symbols is an example of why December is a unique time in the American calendar each year. Many American evangelicals view the world through a sacred versus secular dichotomy for much of the year. This requires a strict filtering of all non-Christian influences. But during Christmas time, candy canes are a witnessing tool, Neil Diamond proclaims of the joy of the newborn savior, and we hear the stories of annual battles over courthouse lawns. Some retailers choose to greet consumers with “Happy Holidays” instead of “Merry Christmas” because they view it as a smart business decision.

Perceived threats to Christmas have generated an active War on Christmas map to document the mounting opposition to the holiday. Last summer, Texas Governor Rick Perry signed into law a bill to grant public schools the right to display religious symbols and for students and teachers to say religious greetings such as “Happy Hanukkah” and “Merry Christmas.” While the law has generated attention for Texas as the frontline of the “war” on Christmas, the bill itself restricts any display that “encourages adherence to a particular religious belief.” The law has led to rumors of schools banning religious language and even the wearing of red and green clothing. This brings new meaning to “blue laws” designed to protect public space in favor of religious traditions. In addition to legislation, religious conservatives are fighting hard in defense of Christmas. Sarah Palin has published a book in her efforts to “protect the heart” of Christmas. She cites numerous incidents where municipal officials or business owners have backed away from using the word “Christmas” in favor of a more generic winter holiday. The American Family Association has encouraged boycotting retailers if they refrain from using the word Christmas to describe the holiday season.

Religious campaigns like the Texas law, Palin’s book, and the AFA boycott typically bring to mind Richard Hofstadter’s “The Paranoid Style in American Politics,” first delivered November 21, 1963, as an address at Oxford University. Hofstadter saw conservatives reacting to the rise of the New Deal and communism with fear that capitalism and democracy would crumble. To Hofstadter, right wingers of the early 60s were anxious about the erosion of their rights, but these fears were unfounded—and also in keeping with a long tradition of paranoia. Hofstadter is cited far too often to castigate any (mostly conservative) group who appears to be opposed to change.

In the modern debate over Christmas, however, the shift in the dominance of Christianity over the culture is real, but the reaction to it is misguided. In defending Christmas and associating the holiday with warfare, these religious leaders may win a cultural battle, but damage the nature of Christianity in the process.  A recent study suggested that many young atheists followed a similar journey to unbelief.  They spoke of an initial exposure to Christianity, but they grew disillusioned when the church focused more on social issues and less on the power of the gospel message. As one of the students commented, “The connection between Jesus and a person's life was not clear.” In the “war on Christmas,” winning the battle for cultural dominance takes away the power of the message of the incarnation. 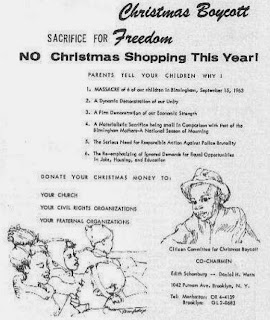 What kind of Christianity would draw people to the manger? Fifty years ago, the violence of church bombings in Birmingham led to a very different boycott of Christmas. James Baldwin joined with Ossie Davis, Ruby Dee and others calling for families to refrain from shopping and send their gift money to Civil Rights organizations. “…Santa will not come this year because he is in mourning for the children of Birmingham, who will get no gifts this year or the next year or the next.” Civil Rights leader James Farmer called for a separate Christmas shopping boycott of stores which had practiced discriminatory practices. While these boycotts were eventually called off, these efforts were steeped in biblical language and a called for action to protect the rights—and lives—of Americans. They rooted their movement in a faith that called them to activism and sacrifice. Their Christianity called them to share the anguish of loss with those who suffered around them.

If you are looking for war this holiday season, students of history could focus on the events of actual wars, fought during Christmas. World War II provided the fantastic story of General Tony McAuliffe and the 101st Airborne in Bastogne during Christmas  1944. Or go back further, to the Christmas Truce of 1914, when British and German soldiers were lured over the top of their trenches by the sound of the enemy singing familiar Christmas hymns. What resulted was a short-lived and unofficial cessation that included an exchange of gifts, sweets, and goodwill. Some soldiers even gave free haircuts to their enemies. If the nationalistic passions of the Great War could be interrupted by the familiar refrains of Silent Night, perhaps there is hope that the No-Man’s Land of the War on Christmas might be a place for peace. Merry Christmas— war is over, if you want it.
Email Post
Labels: atheism christmas Civil Rights Movement evangelical conservatism michael hammond's posts religion and civil rights