Blessed: A History of the American Prosperity Gospel, Part 1

Today begins a 2-part interview with Dr. Kate Bowler, about her fantastic and trend-setting study Blessed: A History of the American Prosperity Gospel, published earlier this year with Oxford University Press and mentioned previously on RiAH. Blessed is a model of outstanding scholarship, and also exhibits fantastically readable prose. Kate is an assistant professor of the history of Christianity in the U.S. at Duke Divinity School, and has published widely on the prosperity gospel. Congrats to Kate (and her family) on the publication of her first book as well as the very recent birth of her son!


Phillip Luke Sinitiere (PLS): Give us a brief snapshot, a thumbnail sketch of Blessed: A History of the American Prosperity Gospel.

Kate Bowler (KB): Blessed is a cultural history of how a tiny off-shoot of pentecostalism became one of the most popular religious explanations for why good things happen to good people. The “prosperity gospel” is really a cluster of four themes: faith, health, wealth, and victory. In its most basic form, faith--a spiritual power released through positive words and belief--can be measured by wealth and health which allows believers to aspire to total victory here on earth. It’s almost sad that a whole decade of your research life can be summed up in a sentence, but there it is.

PLS: There are many who are deeply skeptical of the “prosperity gospel” and its many meanings and caricatures. Briefly explain its historical and cultural significance and why we should pay attention to it. 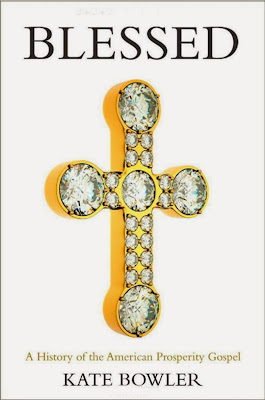 KB: The term “prosperity gospel” is often conflated with a whole host of worries (greed, crass fundraising, greasy leaders, overt religious entrepreneurialism etc.) or whole movements and institutions (megachurches, church growth, pentecostalism, etc.) People come by this confusion honestly, because the rise of the prosperity gospel is a messy history and its cast of characters so varied.  It’s important to remember that, from the late 19th century onwards, Americans fell in love with a host of theologies of self-help that shared a number of common ideas: there is a secret to success; you are the solution; perfectibility is possible; and that everything you need is at your fingertips. What I’m calling the prosperity gospel (though there are many) follows a pentecostal incarnation of those ideas begun by post-war healers that eventually caught on with the rise of televangelism. What we’ve seen since the late 1980s is an increasing turn toward therapeutic religion that soothes the soul, and the prosperity gospel has mastered the tone, vocabulary, and approach to do just that. Rather than an aberration, the prosperity gospel should be seen for what it is—a popular theology of modern living.

PLS: Let’s turn to sources, interviews, ethnography, and the evidentiary base of Blessed. Discuss the research processes and the multiple methodologies you used to complete the project.

KB: This sprawling project demanded an everything-plus-the-kitchen-sink approach. First, I relied on old-school archival research to sift through the hundreds of cheap paperbacks, dozens of periodicals, websites, and sermon recordings that illumine the ideational foundation of the movement. Second, I started to trace networks when I realized that, after the late 1970s, the movement was rapidly expanding beyond its original boundaries. Third, I took on a variety of ethnographic methods to capture various slices of the movement. This included 18 months of participant observation and interviews at a local storefront prosperity church in Durham, North Carolina [PLS: see KB's chapter in Candy Gunther Brown's Global Pentecostal and Charismatic Healing]. The long-form relationships I developed at this church gave me a much richer sense of the everyday spiritual lives of prosperity believers. Further, in order to gain a bird’s eye view of the prosperity megachurch landscape, I traveled widely and visited 25% of all American prosperity megachurches and almost all major conferences. These short trips should be considered “ethnography-lite,” for the brevity of my interactions, but certainly opened my eyes to the movement’s breadth. I interviewed a number of senior pastors, including all the major figures of prosperity churches in Canada. Further, I attended a 10-day trip to the Holy Land with controversial healer Benny Hinn and 900 of his spiritual tourists. Oh, and lastly I compiled statistics on prosperity megachurches by examining the websites of all 1,400 (at the time) American megachurches.
Email Post
Labels: evangelicalism interviews megachurches phil's posts prosperity gospel religion and media