I'm excited to share yet another guest post from Kyle Roberts, Assistant Professor of Public History and New Media at Loyola University in Chicago. Two months back Kyle shared about his class's innovative digital efforts that analyze's Loyola's history and place within nineteenth century American Catholicism. Here, Kyle situates his digital project in Loyola University's larger efforts to promote new research on Jesuit activity in America in conjunction with the 200th anniversary of the Jesuit Restoration. Below are recaps of the talks, exhibits, a call for papers, and even a link to a Restored Jesuit Tumblr blog! 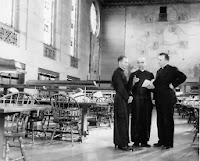 In his introduction to The Cambridge Companion to the Jesuits (2008), editor Thomas Worcester realized he needed to address an imbalance in the volume: fourth-fifths of the essays addressed the history of Jesuits before their suppression in 1773.  “[T]here are relatively few good studies of the Jesuits since 1814 – in any part of the world – at least compared with the abundance of excellent work done on the history of the ‘old’ Society and its ‘corporate’ culture,” Worcester explained. “In general, the Society of Jesus, for much of the century and a half from its restoration until Vatican II, was conservative and even reactionary.” (7-8)

Just one year earlier, John McGreevy, made the point even stronger in America magazine.  Reviewing Gerald McKevitt’s Brokers of Culture: Italian Jesuits in the American West, 1848-1919 (Stanford, 2006), McGreevy wrote: “[T]he 19th-century Jesuits – fervently ultramontane, devoted to the Sacred Heart, fierce defenders of Pope Pius IX and the 1870 definition of papal infallibility and suspicious of liberalism in all its varieties and the public schools that seemed to inculcate it – surely seemed unlikely role models for Jesuits and non-Jesuit scholars in the immediate postconciliar era.”

It might be difficult to identify with men whose worldview was shaped as much by the 1773-1814 suppression as by the European liberal revolutions that forced them into exile (once again) to all corners of the globe a generation later. And yet, to ignore the post-1814 Jesuits is to miss a crucial aspect of Catholic history over the last two centuries.

For one thing, the story of the Jesuits in America, is a story of the Restored Society.  All but one of the twenty-eight Jesuit colleges and universities in the United States today – and all of the secondary schools – were founded by Restored Jesuits.

But the story of the Restored Jesuits is far broader: they were a globalizing force in the “long nineteenth century,” the age reframed by C.A. Bayly, as The Birth of the Modern World, 1780-1914 (Blackwell, 2004).

2014 marks the bicentennial year of the lifting of the Suppression.  In commemoration of the Restoration, Loyola University Chicago is hosting a major conference on October 16-19, 2014.  It aims to bring together junior and senior scholars to begin a conversation about the contribution to American identity of both restored Jesuits and the women religious with whom they worked in their enterprises.  The conference aims at locating these initiatives within the specific experiential context of building an American nation. The stories of these men and women provide studies in what Thomas Tweed has termed Crossing and Dwelling (Harvard, 2006): the crossings and dwellings of refugees from European exclusions; transatlantic immigrants; multilingual and transnational identities; settlers in ethnic urban cores; boundary-dwellers in frontier peripheries.  A copy of CFP can be found here, with a February 1, 2014 deadline for proposals.

This is a propitious time for such a conference.  Some of the leading scholars of American Catholicism are now focusing their energies on exploring the contributions of Restored Jesuits to the nineteenth- and twentieth-century United States.  Over the past few weeks several have come to Loyola to share their work in a seminar series.  Robert Orsi’s interest in devotionalism and print culture has led him to Daniel Lord, S.J., the prolific author and editor of The Queen’s Work, which published hundreds of titles that shaped the religious understandings of a generation of American Catholics.  Ellen Skerrett’s work on Chicago Catholicism shows that although Dutch Jesuit Arnold Damen and native-born reformer Jane Addams both founded institutions within a few blocks of each on Chicago’s west side for the benefit of the city’s Catholic populations, they ignored the other’s presence.  And rather than being put off by the nineteenth-century Jesuits, John McGreevy is hard at work on a new book exploring what these understudied figures have to tell us about nationalism, religious controversy, the “Catholic Revival”, and the transatlantic dimensions of American religion. 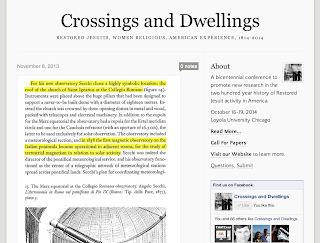 Undergraduate and graduate students at Loyola have also been hard at work uncovering this understudied past.  They have researched the way mission and art combined in the life of Nicholas Point S.J. and the westward map-making and correspondence of Pierre-Jean DeSmet S.J.  Sixteen graduate students, as I mentioned back in September on this site, are hard at work reconstructing the original library of St Ignatius College (now Loyola University) in an innovative virtual library system.  A social-media driven Provenance Project will launch in 2014 to crowd-source the cataloguing of ownership marks in historic Loyola books, with the hopes of thinking about the connections between Jesuit schools and donors across the United States and around the world in the late nineteenth- and early twentieth century.

The 2014 conference is meant to showcase the exciting new work being done in the field of Jesuit history in particular, and American Catholic history more broadly.  Above all, it hopes to shine a light on underused sources and overlooked areas of inquiry.  The tag index for the Tumblr site, now 39 pages long since its launch a year ago, speaks to just how diverse and rich the possibilities are.  Alongside the tags we might expect to see – American Indians, immigrants, Ratio Studiorum, Sacred Heart – are intriguing, perhaps unexpected tags – beauty, emotions, media, sensuous, sports, theater.  I encourage everyone to think about what contribution they might have to make to this exciting project.