This is the third of three reflections on Carol Howard Merritt's book Reframing Hope: Vital Ministry in a New Generation. For the introduction to the series and first post by Seth Dowland, click here. For the second post by Steven Miller, click here. 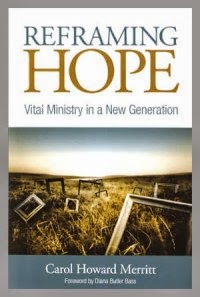 Carol Howard Merritt's engaging book, Reframing Hope, offers an important reminder to both current observers and future historians of American religion that one should be wary of widespread reports of the "decline of the mainline."

In many ways, of course, statistics from the early twenty-first century paint a grim picture for mainline Protestants. Even as Merritt was publishing her book in 2010, the Christian Century reported on the dramatic downturn in attendance in mainline churches since 2000: the Episcopal Church at -18%; United Methodists at -10%; the Evangelical Lutheran Church at -15%; and the Presbyterian Church (USA) at -16%. In terms of membership, the 2011 yearbook of National Council of Churches documented the ongoing decline in every mainline denomination. The recent demographic report for Merritt's own denomination, the Presbyterian Church (USA), shows that the median age of members increased from 60 in 2008 to 63 in 2011, while the denomination lost over 5% of its members just last year. "With fewer and increasingly older members," the Christian Century concluded in its report, "in the 21st century mainline churches will face perhaps their greatest challenge since they faced the American frontier of the 19th century." By almost every quantitative measure, the decline of the mainline is real.

As we all know, however, numbers do not tell us the whole story--and that is where Merritt's book is valuable. She offers a qualitatively different picture of mainline Christianity, a vision of vibrant and imaginative ministries that are attempting not only to remain faithful to the mission of the church but also to effectively meet the present challenges. She candidly acknowledges that the "old frameworks" for successful ministry no longer work, for the world "has become so different from the one in which our churches were formed" (130). As a result, Merritt wants to "reframe" the ministries of mainline Protestants so that their churches can adapt and flourish in a postmodern and pluralistic culture. In her book, the decline of the mainline fades into the background, and the transformation of the mainline takes center stage.

In brief, Merritt proposes numerous adjustments that will allow churches to meet the realities, desires, and needs of people in our current culture. She calls upon Christians to offer authentic communities in order to redress the problems of individualism and isolation; to find authentic ways to communicate through new technology without sacrificing "face-to-face epiphanies" (66); to draw upon the power of stories in testifying to God's work in their lives and in the world; to reinvent social justice activism in extending the reign of God; to renew dedication to protecting the environment and preserving God's creation; and to adopt a holistic approach to faith that invites God's presence and direction into all areas of life, not merely the recognizably "sacred" activities. Throughout her book, Merritt provides theological bases and practical models for the different types of ministries to meet these goals.

One cannot but feel Merritt's excitement, optimism, and of course hope while reading this book. To her, the glass of the mainline's vitality is not half-empty and leaking--it is half-full and bubbling.

Writing about the mainline several weeks ago on the Christian Century's blog Then and Now, Martin Marty offered an important reminder that its "decline" is neither new nor surprising. Like all other historically contingent movements, mainline Protestantism experienced a prime but has since ebbed. Nevertheless, Marty reminded mainline Protestants that "we learn not from trial and triumph but from trial and error." Thus, instead of whining or accepting defeat, mainline Protestants can be "people who, once unburdened from the weight of their declinism, are ready for fresh discovery."

Merritt is a leader who is ready, and she is calling others to join her in the process of discovering "vital ministry in a new generation." Yes, we can document and dissect the decline of the mainline relative to its past. But Reframing Hope also reminds us that thousands of leaders and millions of members are working to ensure that mainline Protestantism not only survives but thrives into the future. While we have many excellent recent studies of mainline Protestantism, I suspect that future historians will be able to write more than simple stories of decline, obituaries, or post-mortem accounts as well.
Email Post
Labels: books brantley's posts carol howard merritt mainline Protestantism reframing hope