Once a semester, I'm invited to preach in chapel here at UDTS. This fall, I chose October 30, for its proximity to Reformation Day, and began formulating a service that would include references to all of the major churches that emerged in that era. This is the sort of thing that happens when a historian gets to preach--aided and abetted by the first lectionary reading for the day, from Ezra 6, which begins, "Then King Darius made a decree, and they searched the archives where the documents were stored in Babylon." I may know practically nothing about preaching, but I do love archives. 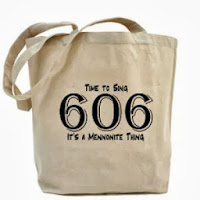 While considering elements that would recall the various early Protestant traditions, I wanted to make sure the Anabaptists got a nod, so I immediately thought of adding Hymn 606 to the order of service. At this point, you have either launched into the song right there at your computer, or you have no idea what I'm talking about.

In the 1969 volume The Mennonite Hymnal, number 606 is a four-part choral setting of the doxology ("Praise God from Whom All Blessings Flow") that has become wildly popular among North American Mennonites. I learned it during my three years as a member of a Mennonite and Brethren congregation in Morgantown, W.V. You can Google "Mennonite 606" to find numerous videos of groups singing the anthem, as well as gems like this story of a Michigan church that made and sold 606 tamales to raise money for global development work. Unfortunately, in the course of my own online research, I discovered that Hymn 606 does not provide a meaningful link to the radical Reformation, as I had hoped. It is instead a testament to Mennonites' Americanization and move toward the Protestant mainline.

According to a paper presented by longtime Goshen College music professor Mary K. Oyer at the 2006 ATLA annual conference, "Two Centuries of American Mennonite Hymn Singing," early Anabaptist hymns were quite long, sung in German, and prominently featured the theme of martyrdom. She gave as an example a song rendered in English as "Who Now Would Follow Christ," which was originally a 27-stanza hymn describing the torture and death of Jorg Wagner in 1527. The translated second verse read, "Christ's servants follow him to death / and give their body, life, and breath / on cross and rack and pyre. / As gold is tried and purified they stand the test of fire."

Most Amish congregations still sing in German, using a hymnal, the Ausbund, produced by Swiss Brethren in 1564. American Mennonites, by contrast, began incorporating Lutheran and Reformed hymns in the early 19th century and adopted English singing by the 1840s. From that point on, Mennonite hymnody became a potpourri of German chorales, the Reformed psalter, American folk tunes, Sunday school songs, a few Ausbund survivors, and new Mennonite texts, notably "I Owe the Lord a Morning Song." Now-famous Hymn 606 weds a 1709 text by Anglican cleric Thomas Ken to an 1830 tune from the Boston Handel and Haydn Society Collection of Church Music. The anthem's only connection to a deeper Anabaptist heritage is the style in which it is sung: four parts, like a German chorale, and a capella, like (Old) Mennonite music.

Moving farther in what Oyer labelled a "progressive" direction, Mennonites produced a Church and Sunday School Hymnal (1902) half-filled with gospel songs. Later, reflecting the Fundamentalist-modernist split, Old Mennonites published a 1927 hymnal retaining those gospel songs while the Mennonite General Conference produced a different 1927 hymnal emphasizing the liturgical church year. The 1969 hymnal in which 606 is #606 (it's since been renumbered #118) was a joint product of both groups. Subsequent Mennonite hymnals featured a broader range of cultures (among them Cheyenne, Zulu, and Japanese) and more gender-inclusive language. Oyer described these books as "very close to the hymnals of the mainline churches."

I'll leave for another day the question of just how close American Mennonites have come to the mainline. (Janine's recent post on Mennonites' shifting peace rhetoric hits that subject from a different angle.) For the purposes of my upcoming chapel service, I've decided to keep not-so-old #606, and train a little chorus of seminarians to sing it, because (a) I really like the song, and (b) Mennonites are hardly alone in having come a long way since the Reformation. Sometimes what you find when you search the archives where the documents are stored isn't an artifact, but evidence of a living tradition, which is surely better than the alternative--a dead one.
Email Post
Labels: elesha's posts hymns mainline Protestantism mennonites music

Jeremy Wiebe said…
Along the lines of this post, there's an essay by Katie Graber in Sound in the Land that draws on a small survey to discuss Mennonites' assumptions about the historical roots of their hymn-singing tradition. I don't have the book at hand, but I recall she found it widely perceived that the songs in the hymnal were written earlier than they were in actuality, and that Mennonites did not realize how many of their most commonly-sung hymns were imported from outside the Anabaptist tradition. This is perhaps not particularly surprising, but interesting in light of how hymn singing has become such a strong symbol of Mennonite identity.

It's worth noting that four-part harmony singing is also an innovation that was introduced in the nineteenth century.
October 19, 2013 at 11:08 AM

Anonymous said…
Just one small comment. Dating the transition from German to English to the 1840s is misleading. There may have been communities where that was the case but many other communities continued to worship in German well into the twentieth century. That's true of Russian immigrants but it's also true of Swiss and German Amish Mennonites. In fact, the 1969 hymnal includes German texts for several late 19th century gospel songs that were originally written in English.

Looking back, it strikes me that the 1969 hymnal might parallel liturgical reform developments in other traditions during the post-WWII era. It certainly seeks to return to the historical origins of Anabaptism by providing a couple of hymns from the Ausbund and it also seeks to carve out an identity independent of Evangelicalism (segregating "Gospel Songs" to a separate section). And for a time, a decade or so, it provided a powerful force for community and shared identity, that was eventually overwhelmed by American popular culture
October 19, 2013 at 3:32 PM