How Mennonites Reinvented Non-Conformity and Non-Resistance, 1908-2008 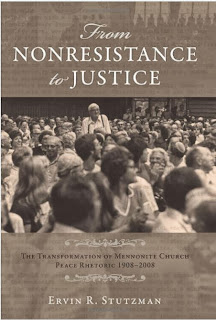 If the Mennonite tradition in the United States had a long and robust history of pacifism and non-resistance to abuse, how and why did so many American Mennonites participate in World War II and support American wars thereafter?

How, why, and when did so many American Mennonites move away from the primacy of non-resistance theology and toward  advocacy of "justice"  in its place? Was it the secularization and "Americanization" pull of the dominant culture?  Or, was this theological change more deliberate--an attempt to align the faith tradition with a truer sense of achieving social peace?

I picked up Ervin Stutzman's book on the subject, From NonResistance to Justice: The Transformation of Mennonite Church Peace Rhetoric, 1908-2008 not because I am at all an expert on Mennonites, but because I genuinely wondered. Paul Buhle's terrific graphic history, Radical Jesus  (reviewed here) introduced me to the celebrated traditions of Anabaptist nonresistance, and I was just puzzled to understand how war-tolerating Mennonites fit into the tradition.The set of answers Stuzman finds is fascinating, and remind us how absolutely critical World War I and the 1920s were to the transformation of American Religious doctrine. The author acknowledges that the study is limited by its focus on records from conferences and other published materials, but for a rhetorical study, I could not think of how it could be better researched or written.


The answers Stutzman finds are as complex as they are fascinating, and this review will only mention them partially, and in brief. I highly recommend the book to anyone interested in Pacifism, Religion and Violence, The Religious Right, and the Religious Left. American Mennonites deserve a significant place in all these histories.

Approaching the subject as a good intellectual historian, Stutzman examines two major strands of traditional and European Mennonite beliefs which changed over time in the United States. First, he found a gradual abandonment of the expectation that non-conformity was central to non-resistance. (Non-resistance was a key tenet of Mennonite faith through the Schleitheim Confession and Dordrecht Confession, from the 1500s-1800s). If Mennonites were once taught to refuse all expectations of military service and not resist any kind of evildoer (allow perpetrators to inflict pain, even if it ended in death), American Mennonites in the early twentieth century began to revise those principles as somewhat dated. As different church congregations blended in the United States, and different ethnic traditions of American Mennonites mixed (especially Germans and Swiss), churches stopped enforcing non-conformity as a general principle for living their faith in the US. This "secularization" of the church meant that more church members moved into the comfortable middle class and voted. (German-language General Conference Mennonites had always voted, Stutzman notes, but this became more widespread in the much larger MC branch in the early twentieth century. Stutzman traces the MC branch, the largest group and the one which ultimately is the umbrella for both conferences when they unite.). Throughout the book, Stutzman points to this transition against non-conformity as absolutely key, for it weakened the social structures necessary to maintain non-resistance. In the place of non-resistance, Mennonites from the early twentieth century began developing doctrines of peacemaking.

Second, Stutzman found that the Fundamentalist/ Modernist debates of the early twentieth century sincerely impacted Mennonite discussions of self-identity. As Stutzman summarized, the editor of the Mennonites's major publication organ, the Gospel Witness, said that "the best defense against worldiliness...was a steadfast commitment to teaching biblical doctrine, with a particular emphasis on nonconformity and nonresistance." Afraid of Modernism secularizing the church any further, he defended the inerrancy of the Bible (rather than, perhaps, the Confessions) as the most central foundation of the faith. Some even joined fundamentalists in premillennialism, despite the fact that Mennonite tradition had long held out an amillenialism. If Mennonites "Americanized," many of them Americanized into the Anglo-American Fundamentalist movement. As American Fundamentalists, many Mennonites came to believe that war was a "necessity ordained by God as a way to bring about his will in the world, including the fulfillment of end-time biblical prophecy."

Hence, even though Mennonites during WW1 did try to be separate from the world and not violent, they were already beginning to accept the fact of war. In 1915, they issued a statement that no Christian should "engage in carnal warfare," or bear arms as a soldier, but other parts of military service were acceptable. The reasons for this transition were various. Not only were many Americanizing into middle class Protestant Fundamentalism in a religious sense, but they were also doing so in the social sense. Many Mennonites were German Americans and felt the need to prove their loyalty to the United States in the face of the German adversaries and severe anti-German propaganda in the US.  When all men were legally required to register for the draft in 1917 (a law that would put many non-resistant socialists and labor leaders in jail!), Mennonites largely complied under the provision that they would work as noncombatants. They would retract some of this decision in religious doctrine in coming years--suggesting that they were against conscription legislation and ultimately against war--but they maintained their alliance with Fundamentalists against Modernists and the post-millenialism they preached. They also resisted labor unions (and certainly socialism!) as coercive mechanisms. As they framed it, all coercive means (war, unions, or even so-called peace initiatives) were opposed to the doctrines of non-resistance as they understood them.

In the 1920s and 30s, the Mennonite conference essentially adopted a Fundamentalist posture toward politics and economics. They distanced themselves from government and unions not because their goals were wrong but because they demanded uniformity and used coercive tactics--not making enough room for nonresistance of the minority. Fearing fascism, pacifism and non-resistance to evildoers became much less important than the opportunity for any one person to resist authorities so construed. As Stutzman shows, however, even though many Mennonites were politically conservative, they were not entirely sold on American patriotism.

The next two thirds of the book covers the period from 1943 to 2008, and shows the intricate ways American Mennonites reinvented the faith to accord with peacemaking while also not aligning with coercive bodies which trampled out minority dissent. In the run-up to World War II and after, Stutzman finds Mennonites united by a reinvented "Anabaptist Vision" of Mennonite identity. They continued to accept the fact of war, but much more resistant to fighting this "Good War"  than to the Great War which preceded it. A bit like the Social Gospel acolytes they rejected years earlier, they celebrated peacemaking at the core of their Christian tradition.

Since the 1950s, Stutzman found, many American Mennonites re-entered the arena of political engagement, even if not directly. Many rethought the problems with the coercive mechanisms of organized labor, and became more attentive to the marginalization of the poor and racial minorities. Though they continued to accept the fact of war, many sought opportunities for conscientious objectors in war to do community service under the auspices of community agencies (rather than non-combat work for the war itself). Some took active interest in the Peace Corps. In the 1960s and 70s, many of these Mennonite peacemaking initiatives exploded in intensity and accomplished a great deal of activism in favor of peacemaking. In a sentence, many Mennonites became leaders in the nascent Religious Left. This narrative very interestingly dovetails and conflicts with the history of other Christian denominations in these same years, especially that examined by David Swartz in Moral Minority. It would have been great to see this Mennonite denominational history place Mennonites within this larger Protestant context.

Others, of course, remained more traditionally political for the era (more aligned with American Fundamentalism of the previous generation of Mennonites). We see this in the continued ambivalence toward government social programs as "coercion" and in the renewed questioning of Mennonites participation in the democratic system. Overall, Stutzman very effectively shows, Mennonites in the mid to late twentieth century reinvented the faith on the possibility of a Church independent of state control but active as peacemakers within the life of the larger society.

They transformed the ideas of non-conformity and non-resistance as such, for they largely accepted the fact of a wartime state and stopped enforcing the idea that Christians ought to make their life in alternate Christian communities. Nevertheless, Stutzman maintains, Mennonites evolved these principles into positive mechanisms of creating justice on earth and maintained the "two-kingdom theology" which Mennonites taught from the beginning. As a Mennonite church administrator and preacher, Stutzman offers the present moment of justice-focus the imprimatur of a kind of true Mennonite heritage, even though he gently recognizes that a whole lot has changed.

I would teach this book in part or in whole in courses on Religion and American Politics. The chapters on the Mennonites, war, and social activism in the 1910s offer a very interesting counterpoint to work on the same period by Kip Kosek, Dan McKanan, Dave Burns, Jonathan Ebel, and Clifford Putney. Chapters on the engagement of American Christianity with Vietnam in the 1960s and 70s offer wonderful conversations with work by Preston Shires, David Swartz, Steven Miller, Dan Williams, and William Martin. Though the book is a denominational history at its finest, it would be a terrible shame if it remained only that.

Steven P. Miller said…
Thanks for this thoughtful review! As with any faith tradition, this history can get incredibly complicated (denominational minutiae, regional differences, ethnic dynamics, competing or overlapping institutions, and so on). The Vietnam era strikes me as the most critical recent turning point in this story. An unpopular, draft-driven war fundamentally transformed the political dynamics of non-resistance/pacifism, smoothing over the differences between Anabaptism and the broader social justice left. (At the same time, American Mennonites as a whole have remained decidedly right-of-center in their voting patterns—a fact that might surprise those whose encounters with Mennonites come largely in activist or academic contexts.)
October 9, 2013 at 9:25 AM

Janine Giordano Drake said…
Great points, Steven. I think the author would agree that Vietnam did help smooth over differences between Anabaptists and the broader social justice left. In fact, I think that was one of his provocations for doing this century-long history of Mennonite doctrine.

It's also a great point to point out how many American Mennonites remain interested in minimal government. Stutzman acknowledges that this is not something that comes up as much in the published records at the denominational level. I guess it's a bit like the many many many conservative proto-mainline Protestants in the Social Gospel era.

That fetish for archival materials really does influence the kinds of histories we write!
October 9, 2013 at 10:38 AM

Though the book is a denominational history at its finest, it would be a terrible shame if it remained only that.

Amen. The Anabaptist tradition presents a unique, non-normative prism through which to view our history.

Deborah said…
I appreciate this review, Janine. How are you doing these days? Where are you teaching?
November 15, 2016 at 7:51 AM