The Roots of Christian Zionism

I received this book recently, and thought I would just do a quick informational post about it here, as the topic will doubtless be of interest to many: Robert O. Smith, More Desired than Our Own Salvation: The Roots of Christian Zionism (Oxford University Press). Here's a brief description, from the publisher: 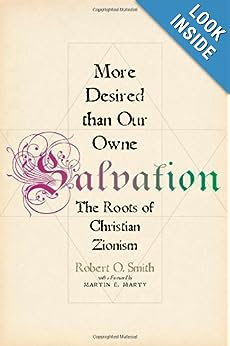 Millions of American Christians see U.S. support for the State of Israel as a God-ordained responsibility. American sympathies for the State of Israel are consistently and often substantially higher than for Arab states or Palestinians. More Desired than Our Owne Salvation is a compelling historical look at how this consensus came to be. In 2006, John Hagee founded Christians United for Israel. Several high-level policymakers, both Christians and Jews, rushed to endorse the effort. Soon, however, questions arose about anti-Catholic and anti-Islamic ideas contained in Hagee's preaching and writing. More Desired than Our OwneSalvation shows that these ideas draw from a long heritage of Anglo-American Protestant culture. Contemporary Christian Zionism may say more about American culture than most Americans care to admit.The roots of Christian Zionism in sixteenth- and seventeenth-century Protestant interpretations of scripture and history formed not only Anglo-American theology but the foundations of American culture itself. Black Protestant views show, for instance, how Christian Zionism is connected intimately with racial identity and American exceptionalism, not just Christian beliefs. Martin Luther and John Calvin's identification of the Pope and the Turk as the two heads of the Antichrist echoes in our world today. Robert O. Smith has identified an English Protestant tradition of Judeo-centric prophecy interpretation that shaped Puritan commitment. In New England, this tradition informed the foundations of American identity. From the Cartwright Petition in 1649 to the Blackstone Memorial in 1891 to the work of John Hagee today, Christian Zionism has prepared the ground for Christians in the U.S. to see the modern State of Israel as a prophetic counterpart, a modern nation-state whose preservation "may be more desired then our owne salvation."

Also, looks like the work was based on this dissertation.

The general subject of the book reminded me of the story "Cowboys of the Apocalypse," from This American Life (originally aired 1999), about the attempt by an alliance of fundamentalist Christians and orthodox Jews to breed a perfect cow in Texas (by biblical standards) that would meet the requirements for prophecy and thus hasten the apocalypse.
Email Post
Labels: american judaism apocalypticism christian zionism Israel Judeo-Christianity new books religion and scholarship