Earlier this month I went to Colorado Springs for a cousin’s wedding. It was a wonderful getaway from muggy Florida, complete with catching up with family, seeing Pike’s Peak, and having breakfast with blogmeister Paul Harvey. One of the places I visited was the Manitou Cliff Dwellings. These are 800–1000 year old dwellings from the Four Corners region that were moved to Manitou Springs from 1904 to 1907. The Manitou Cliff Dwellings Ruins Company was responsible for the relocation, reassemble, and reinforcement of the dwellings. For the last 100+ years, visitors to the cliff dwellings and museum are able to walk through the dwellings and climb through the doorways.

Most of the adjacent museum is dedicated to the history of Native Americans of the Four Corners region and it includes some wonderful pottery displays. Additionally, the history of this particular site is presented in a small portion of the museum connected to the gift shop. When the Manitou Cliff Dwellings opened to the public in 1907, a three story pueblo was built nearby to house a family of Native American dancers who performed at the site for the next several generations (see the Cliff Dwellings website). Additionally Vida Ellison, co-owner of the dwellings from 1910–1947, occasionally dressed in Native clothing to portray Cliff Dweller life for visitors. The fascination of non-Natives and this want to preserve and share Native cultures with a wider audience—though for an admission fee—reflects the complicated history of interactions between Native Americans and whites.

The photographs inside the museum, now partly housed in the pueblo building, 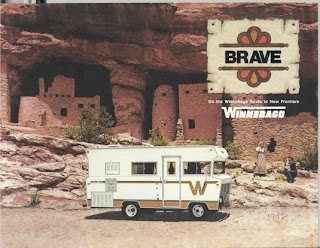 are wonderful snapshots of the site. These date back to the site’s opening in 1907 and include photographs of the on-site dancers, of visitors, and even Winnebago advertisements from the 1970s taken in front of the cliff dwellings. Displays honoring the site’s deceased dancers sit alongside displays paying tribute to the site’s owners. Souvenirs from throughout the years, including a baseball-style felt pennant, fill plexiglass cases.


Because of this relocation, there is a lot on the web about these cliff dwellings being “fake.” When I put “Manitou Cliff Dwellings” into Google, the second suggestion was the addition of the word “fake.” While I find the existence of the fake/authentic debate interesting, I don’t want to provide an opinion for either side of it. Rather, I’m interested in the history of the site itself since its 1907 opening and the interactions between Native Americans and whites at the site. It also calls to mind two fairly recent publications on the topic I want to recommend to readers.

Dennis F. Kelley’s recent article “Ancient Traditions, Modern Constructions: Innovation, Continuity, and Spirituality on the Powwow Trail” in the winter 2012 issue of the Journal for the Study of Religions and Ideologies is a fantastic article that covers a lot of ground, including the politics of indigenous identity. He argues that the intertribal powwow “represents an important venue for representative interaction, establishing and valorizing a broad Native presence that can support individual tribal efforts to increase traditional identities.” Thus, intertribal powwows become a powerful means of maintaining Native identity, not in spite of, but because of their modern innovation and adaptation. As I read Kelley’s article this summer I was reminded of Tracy Neal Leavelle’s phrase “the tyranny of authenticity” concerning the privileging of Native traditions seen as “unbroken” or timeless. In a panel on religion and space at this summer’s Religion and American Culture Biennial Conference, Leavelle referenced how the “overwhelming sense of pastness when dealing with American Indian religions” leaves “very little room for growth, for life, for the future.” Kelley’s article shows how contemporary American Indian spirituality is negotiated in modernity and the fruitful analysis that comes from breaking loyalty to the “sense of pastness” and focusing on innovation and context. Additionally, it shows why categories like authenticity are situational and based on perspective.

When it comes to Native American religious cultures, the identification of a practice or space as authentic or not is particularly charged. As such, the history of these cliff dwellings and particularly the 100+ years of the site as a tourist attraction seems a worthwhile place for someone to explore the Native Americans religions in the long twentieth century. In the meantime, go read Kelley’s and Leavelle’s contributions to the conversation.

Unknown said…
Great post. I love how you connect this to the “the tyranny of authenticity” and how loyalty to the “sense of pastness” creates problems in the present. I wonder if it might help to think of powwows as a kind of syncretism along the lines of what Joel Robbins calls for in his article, "Crypto-Religion and the Study of Cultural Mixtures: Anthropology, Value, and the Nature of Syncretism" Jnl of the American Academy of Religion 79.2 (2011): 408-424
October 6, 2013 at 1:33 AM

marksanders42 said…
Hi... great post. As for the real/fake controversy, I recommend reading/Googling Don Fowler's A Laboratory for Anthropology: Science and Romanticism in the American Southwest, 1846-1930. It gives a great overview of Virginia McClurg/Lucy Peabody. Incidentally, the cliff dwellings are indeed fake. Thanks for posting this!
November 23, 2013 at 2:59 PM