Religion in Film: The Sequel

Last month I used this space to solicit recommendations on movies that might find a place in a new course I'm creating on religion in film. I got many excellent suggestions which I will share for those of you who may be considering such a course, would like to have a fairly comprehensive list of films with religious themes that could be assigned for other classes, or just want to flesh out your Netflix queue with horizon-expanding cinematic fare. 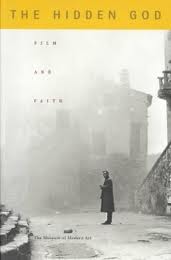 First, a couple of useful books: The Hidden God: Film and Faith (2003) edited by Mary Lea Bandy and Antonio Monday. Short essays (many of which can be read via this link) by 35 notable writers and scholars on over 50 films from around the world, "some more or less explicitly religious in theme, others from a gamut of genres not always connected with questions of faith: the western, the thriller, the policier, the costume drama, science fiction, horror, comedy."

The Religion and Film Reader (2007), edited by Jolyon Mitchell and S. Brent Plate, includes a long section on global film, with a substantial portion devoted to films from Africa and the Middle East, Asia and Australia, Europe, and North and South American. Also useful sections on the Dawn of Cinema, the Birth of Film Theory, Theological and Biblical Approaches to Analyzing Film, Biblical Connections, and Reflections on the Relation Between Religion and Film.

Now, in no particular order, the films that came recommended, or that I've used in other courses, in a few cases with comments from people who shared them. I realize that more categorizing would be helpful but this is what I've got.


The Monastery: Mr. Vyg and the Nun
Ostrov
Babette's Feast
Pi by Aronofsky (set in the US but not Christian)
Breaking the Waves
These just in (9/21): Higher Ground and Arranged
Eternal Sunshine of the Spotless Mind
What Dreams May Come
The Way
Dead Man
Of Gods and Men

Into Great Silence is a great documentary film, but...
"Kumare" could be really useful for tackling representations of Hindu religions and white New Agey-Spiritualism
The Exorcist
Rosemary's Baby


The original Day the Earth Stood Still. You could pair it with other secularized Christ SciFi films such as Armageddon (or Melancholia), or with other alien visitation films such as Close Encounters
Before the Rain
Luis Bunuel's Simon of the Desert, Viridiana, and The Milky Way.
Ingmar Bergman's The Virgin Spring and Winter Light
Four Lions
The Infidel


Sweating Indian Style (about the appropriation of Native American ritual by white women).


The Apostle and/or Tender Mercies


Black Robe is fine, but you could branch out to Powwow Highway or Smoke Signals


Left Behind or The Matrix or Handmaid's Tale could be wild cards.


For Judaism: some Woody Allen like Crimes and Misdemeanors
The Coen Brothers' A Serious Man.
Hester Street is great (immigrant conflict over religion/culture/assimilation).
The Jazz Singer
Trembling Before G_d (a documentary on gay and lesbian Orthodox Jews)
The Chosen is a great film which highlights the differences between the Orthodox (Hasidic) and Conservative movements during the mid-20th century.


For Christianity: most anything Ingmar Bergman,
Rossellini's Flowers of St. Francis
Malick's Tree of Life,
Frammartino's Le Quattro Volte.
Jesus of Montreal
Pasolini's The Gospel According to Matthew
Last Temptation of Christ
The Passion of the Christ


For Buddhism: maybe The Burmese Harp by Ichikawa
The Cup by Khyentse Norbu
Eric Valli's Himalaya
Kundun
Seven Years in Tibet.
Why Has Bodhi-Dharma Left for the East
Little Buddha
Ong-Bak: The Thai Warrior


Bend it like Beckham's Indian wedding scenes could be useful.
Gandhi might be useful, as well
Tarantino's Kill Bill
The Mission
Apocalypto
Russian Ark
Hayao Miyazaki's Princess Mononoke or Spirited Away
Peter Brook's film version of The Mahabharata (1989), either the mini-series or theatrical version.

Mosquito Coast has an underlying Science v. Religion theme.
If you want to tackle portrayals of race in film, what about The Green Pastures?
Something more theologically driven like The Adjustment Bureau or even The Village.
Syriana could be employed to discuss religion and international (ME) politics...

Scenes that are religious in nature or speak to a certain view of religion from films that are otherwise not 'religious'. The famous scene from "The Gods Must Be Crazy" is a good example, as would be some of the scenes in "Breaking the Waves", "Pi", etc.

I notice no one mentioned The DaVinci Code. :)

Unknown said…
This list is incredibly helpful! Thank you so much for compiling and sharing.

Higher Ground (2011) is a great film about evangelicalism and testing/losing faith -- and stars Vera Farmiga (need I say more??)

Kerry said…
I really recommend "Arranged" (2007), a film about two women - one Jewish, one Muslim - who work at the same Brooklyn public school and are both about to enter arranged marriages. It's a lovely comedy that treats the two religious cultures very thoughtfully and well.
September 21, 2013 at 10:01 AM