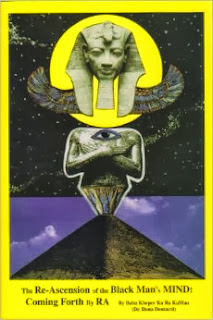 In a used bookstore, this weekend, I found a copy of The Re-Ascension of the Black Man’s Mind: Coming Forth by RA (1998) by Dr. Dana Dennard (a.k.a. Baba Kheper Ka Ra KaMau). Dr. Dennard, a licensed clinical psychologist in Tallahassee, Florida, and was a professor of psychology at Florida A & M University (FAMU) from 1990-1996 and currently adjuncts in the psychology department at FAMU. Dr. Dennard and his wife, Sharon Ames-Dennar, co-founded the Aakhet Center for Human Development, where they facilitate numerous rites of passage programs for African American men. Within his book, Dr. Dennard speaks of his mystical experiences encountering the Egyptian God, Ra, and his awakening to original African spirituality located in the ancient Egyptian texts. He speaks of first finding it in Budge’s The Egyptian Book of the Dead, a.k.a. the Book of Coming Forth By Day and Night and then others. Coupled with this spiritual reawakening, Dr. Dennard speaks of how “the white people” have not only taken “the black man” from his land and family, but also his original spirituality, and that the path of spiritual awakening for the Black Man “is not a return to ‘church’ or these religions that white culture has contaminated,” but instead a new world order and age that will be a “different order than the plan currently being orchestrated by the satanic faction of the Masonic Order of secret white societies.” In addition to these points, he discusses out-of-body travel, makes claims about the original Egyptian or Kemetic religion, discusses genetics, and ultimately denounces Christianity and Islam. All the while promoting the spiritual and liberating properties of the Light of RA.

When reading Dr. Dennard’s book, I was struck with just how much he has in common with many of the 19th and 20th century esoteric groups and individuals I study. While it is true they frequently come to different conclusions about race, it is hard to miss the central focus on Egypt as a source of ancient wisdom (gnosis), the adoption of Egyptian language and symbolism, the focus on race and genetics as an indication of human advancement, discussions of astral and out-of-body traveling, Freemasonry (pro or con), conspiracy theories, and in later esoteric traditions, assertions of UFO and alien-human interaction.

The unfortunate part, however, is that few scholars of religion are focusing on these traditions, although I will discuss a few who are below. Moreover, when scholars of religion do investigate some of the older forms of these traditions, such as Moorish Science, unfortunately they are unaware of the more recent research into occultism and esotericism which would help them better understand the traditions. For instance the Moorish Temple’s Circle Seven Koran is composed of excerpts from The Aquarian Age Gospel of Jesus, the Christ of the Piscean Age (1908), a text deriving from Theosophy and Guy Ballard’s I AM, and Sri Ramatherio’s (a pseudonym for Spencer Lewis), Unto Thee I Grant (1925), a Rosicrucian text written by the founder of AMORC (The Ancient Mystical Order Rosae Crucis). Probably the best scholar to investigate this subject is Susan Nance. While her efforts are admirable, it is clear that her research into these esoteric side of these traditions was limited. Exploring the depth of these connections and influences is all the more important when so many subsequent African American religious movements have been based on the Moorish Temple. 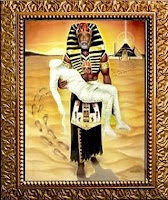 For instance, one of the most significant African American religious tradition to fully incorporate a large variety of esoteric components, including portions from the Moorish Temple, is Dr. Malachi Zador (Dwight) York’s United Nuwaubian Nation. Operating for over 40 years, the Nuwaubian’s have an active presence in America, Canada, and the U.K. They have established temples and bookstores in a variety of cities, recruited tens of thousands of members, and yet, to date, there is only one monograph about them, The Nuwaubian Nation: Black Spirituality and State Control (Ashgate 2010) by Susan Palmer, and one significant essay in the JAAR, by Julius H. Bailey in 2006. Most other references in academic literature to the Nuwaubians are in passing, and usually only related to its incorporation of UFO and aliens in its religious teachings. Yet, UFOs only scratches the surface of how involved with esotericism the Nuwaubians are. Perhaps one aspect that complicates the research is the inclusion of Black supremacy claims. For instance, one publication of York’s called The Paleman claims that white people have leprosy due to the “Curse of Ham,” an interesting narrative reversal.

Moreover, Bailey is correct when he speaks of the importance of secrecy in the organization, something Palmer also encountered. Secrecy, however, is standard fare in esoteric organizations. Additionally, their inclusion of Black Freemasonry, magic amulets, a focus on the gnosis from Egypt (or Egipt as they spell it), assertions of astral travel derived from Edgar Cayce, modern conspiracy theories, and mystical Islam all place it squarely in the domain of Western Esotericism.

Indeed, in the early 1990s, they purchased 476 acres of land for just under one million dollars and moved their organizational headquarters to their new Egyptian styled village called Tama Re located just outside Eatonton, Georgia. Here the Nuwaubians flourished, often hosting busloads of both faithful and visitors who were greeted by an environment where ancient Egypt was resurrected and the residents dressed in Egyptian costumes. All of this quite reminiscent of the occult orders of the nineteenth and twentieth centuries, especially the Hermetic Order of the Golden Dawn and Rosicrucians, groups which are still very prevalent in America and Europe today, and continue to construct places and costumes based on ancient Egypt. Tama Re continued until 2002 when was raided by government authorities and York arrested.

In 2004 York was sentenced to 135 years in prison for child molestation charges in seven states and other tax related crimes which were charged under RICO statutes. In 2005 Tama Re was demolished. Nevertheless, the Nuwaubians exist today, and are actively campaigning for the release of York, claiming his imprisonment was part of the white power structure’s efforts to disempower African Americans.


As I noted above, there are a handful of scholars beginning to look at African American religions, building on theories of esotericism. I mentioned Julius H. Bailey of the University of Redlands. While his research covers the AME church, it also looks at emergent black new religious movements. Stephen Finley, of LSU, is probably doing the most to spearhead the study of African American religious movements through the lens of esotericism. He is currently co-editing a collection of essays to be published by Brill tentatively entitled, ‘There Is a Mystery’: Esotericism, Gnosticism, and Mysticism in African American Religious Experience. He contributed to a panel regarding the volume at the AAR in Chicago 2012 and has presented at conferences focused on esotericism. ‘There is a mystery’ will also be co-edited by Margarita Guillory and Hugh Page. Contributions to the volume include Dr. Mary Ann Clark’s “Spirit is Universal: Development of Black Spiritualist Churches” and Yvonne P. Chireau’s “Esotericism, Gnosticism, and Mysticism in Haitian Vodou.”

Jesse said…
For instance the Moorish Temple’s Circle Seven Koran is composed of excerpts from The Aquarian Age Gospel of Jesus, the Christ of the Piscean Age (1908), a text deriving from Theosophy and Guy Ballard’s I AM

rjc said…
Excellent stuff, John. I've long thought Sun Ra should be included in our studies of American religious history. Here's something more for your files: the reading list and some information on a course Sun Ra taught at Berkeley in the 1970s -- http://vancouverjazz.com/forums/showthread.php?t=3376
October 1, 2013 at 9:43 AM

Unknown said…
Awesome! Where did you get the photos?? Love to see an architectural analysis of Tama Re.
October 7, 2013 at 10:30 PM