On the heels of Randall's interview with Larry Eskridge, I thought I'd use today's post to promote the ISAE conference Larry mentioned near the end of the interview: "The Worlds of Billy Graham." From September 26-28, about a dozen scholars will be giving talks on Graham in Wheaton. You can see the entire schedule here. 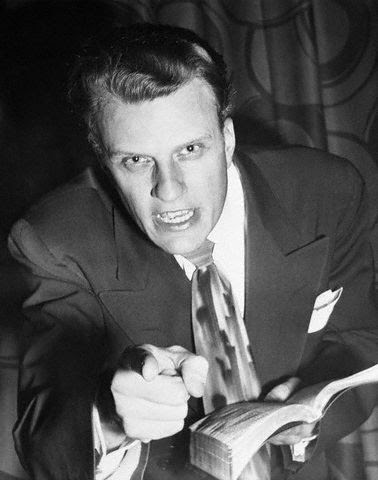 When conference organizers invited me to write a paper for this conference, I must admit to some doubt about whether such a well-covered figure like Graham merited a major scholarly conference and another anthology. What more is there to say? Steven Miller's excellent biography covers Graham's entire public career, and it's only four years old. Grant Wacker published a thoughtful precis of his forthcoming Graham biography in Church History, and Wacker has given a number of major presentations on Graham in recent years. Andrew Finstuen creatively compared Graham with Reinhold Niebuhr and Paul Tillich. Graham figured heavily into Darren Dochuk's book on southern California. I could go on.

But as I began reading the abstracts for conference papers in preparation for a pre-conference colloquium, I realized how valuable this conference could be. Graham's public career spans seven decades, and he has figured into an amazing number of events and trends in American religious history. Allowing several voices to comment on Graham highlights both the through-lines in his career and the understudied and unexpected stories of his life. For instance, David King is working on a fascinating paper about Graham's connection to evangelical humanitarianism, while Dochuk sheds light on the relationships Graham built with conservative black businessmen. Anne Blue Wills's research on Ruth Bell Graham recovers an overlooked figure and offers a powerful statement about the negotiation of gender roles within evangelicalism. By allowing individual scholars to focus on these and other stories, the conference will open up new perspectives on Graham.

If you'll be in the Chicago area at the end of September, I encourage you to considering attending (registration information here). I'll try to post some follow-up thoughts in October, as well. Ultimately, we're hoping to publish conference papers in an anthology. As long as self-promotion is still a major theme of this blog, you can bet you'll read about that here, too!
Email Post
Labels: 20th Century billy graham evangelcalism seth's posts

Randall said…
I wish Hilde and I could make it to the conference. The program looks wonderful. (Also, always great to make use of the incredibly extensive archives at Wheaton.)
August 14, 2013 at 8:38 AM