USIH Books, Scientific Democracy, and the Legacy of Liberal Protestantism

The good folks at USIH have their Book Review page up and running at full steam.  RIAH readers will be interested in a number of recent reviews, including Jon Wood's treatment of Matt Hedstrom's (now-award-winning!) Rise of Liberal Religion and a lively conversation about John Fea, Jay Green, and Eric Miller's edited collection, Confessing History, sparked by Mark Thompson's thoughtful survey.

Speaking of USIH, I had the pleasure this summer of reading one of the premier new titles in that field, Andrew Jewett's Science, Democracy, and the American University (Cambridge, 2012).  Jewett 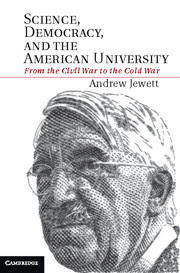 attempts to distinguish a tradition of "scientific democracy," of value-guided (as opposed to value-neutral) empiricism, originating in the Gilded Age quest to build the "modern" university and running into and up against New Deal and Cold War achievements in technocracy.  On the surface, Jewett's protagonists, led by John Dewey, were no friends of Christian America.  Still, for those with the eyes to see and ears to hear, the legacy of liberal Protestant engagement with the social and natural sciences is written all over Jewett's work, from scientific democrats (Richard Ely, Charles Ellwood, Gordon Allport) who never really left liberal Christian circles to Jewett's occasional references to America's persisting "Protestant-inflected" culture.  Liberal Protestants imagined the spread of a scientific century only insofar as the sciences remained tethered to traditional (Western) moral philosophy and participatory, deliberative modes of citizenship.  Some questions I've been considering since reading Jewett:

1. To what extent do the social sciences (especially with their deep roots in liberal Protestantism) represent an ongoing effort to overcome or at least to counterbalance America's evangelical culture of acquisitive individualism?  How successful have they been?

2. Is it possible to ever "reunite" the natural sciences and the humanities (we'll be having such discussions as a faculty this year as we look to make or Gen Ed program truly general)?

3.  What would a comparative history of how American liberal Protestants, evangelicals, and Catholics have thought about and practiced science and technology look like?  Does one already exist?
Email Post
Labels: liberal Protestantism liberal religion new books