Living history museums. It was one of my first American addictions after it dawned on me that a) I was not returning to Canada anytime soon and b) that if I were going to truly accept American religious history as my profession that I should begin to enjoy America-na. And so began the nightmare for amateur actors at living history museums around the country, forced to tolerate my endless questions about wig construction, building materials, or whether the fire alarm should carry the additional prefix "Ye Olde."

It was there that I began to learn the true power of American nostalgia, that gauzy lens that filters the historical light. Suddenly the Moravian cookies at Old Salem seemed sweeter and the doilies of Colonial Williamsburg more necessary. (Incidentally, Williamsburg is where I bought a Robert E. Lee action figure whose goofy grin granted him the military seriousness of Colonel Sanders.) 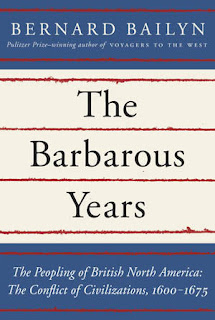 (If you colonialists might permit this scholar of modern evangelicalism some scattered thoughts about your expertise,) The Barbarous Years returns to a project he began in The Peopling of British North America (1986) and continued in Voyagers to the West (1987) with a prequel of sorts. It follows the first 75 years of settlement in the New World, following a diverse lot of European settlers, from the high to the low born, that ran the gamut of Christian loyalties.

His densely researched and delicately spun accounts, particularly of Chesapeake settlers, New England colonies, and Dutch experiments, chronicle the lightly-veiled chaos of wave after wave of immigrant hopefuls, poorly led and meagerly supplied, battling against encroaching dangers from within and without. Their efforts to stabilize their lives would find little purchase in these long years of "fear and paranoia." (502)


Bailyn keeps good company with a generation of scholarship whose findings deconstruct cherished American myths about the nobility of these early European experiments. But where Bailyn's new piece seems to have struck a nerve is in its re-casting of the first 75 years of settlement as a dark psychodrama. Tension simmers in every account of contact and exchange as the threat of barbarity itself seems to be the only constant. For as Bailyn states in the introduction: "their experiences were not mainly of triumph but of confusion, failure, violence, and the loss of civility as they sought to normalize abnormal situations and to recapture lost worlds..." (xv)

Much like The Invasion Within, James Axtell's classic tripartite comparison between the French, English, and aboriginal cultures battling for dominance in the North American theater, the most insidious threat to these civilizations is cast as internal. But gone is the sense of cohesion inherent in words like "culture" and "conversion," as a religious turn made with a certain pragmatism or assent. Instead, pressure is felt from within and without, as the corrosion of the humanity of each community seems perpetually at stake.

Had Bailyn sucked a bit more marrow from Canadian experiences, he would have been gratified by the Jesuit assessment of their own Great Lakes efforts. Father Jerome Lalemant arrived in the New World and was sent almost immediately to the Hurons as the successor to the newly famous Father Jean Brébeuf, whose lacerated flesh had been charred alive before his heart had been torn from his body and devoured. Scenes from his martyrdom had become one of the most circulated images in the New World. The new blackrobe's assessment of the brutal landscape might have easily given Bailyn a further subtitle for his masterpiece: “No doubt we carried misery with us, since wherever we set foot, either death or disease followed us.”