Know Your Archives: Learning to Read in Bethlehem

Today’s guest post comes from David Komline, a doctoral candidate at the University of Notre Dame.  His dissertation, “The Common School Awakening: Education, Religion, and Reform in Transatlantic Perspective, 1800-1848,” examines the religious influences behind a movement for state-sponsored schools that stretched from Germany, through France and Britain, to America.  His base for the 2013-2014 academic year will be the University of Heidelberg.

After finishing my master’s degree and before beginning doctoral work I studied for a year at the University of Tübingen in Germany, where I spent many hours in the library, pouring over old newspapers and journals.  When I began, even making sense of printed German was a challenge.  But by the end of the year my language abilities had improved, so I decided to examine some manuscript sources.  I still remember my first visit to an archive in Germany.  I sat down before a folder of letters, looked at the first sheet, tried to decipher a few lines, and was baffled.  I moved to the next document.  Again, I understood almost nothing.  The third letter produced the same bewilderment.  Only after flipping almost to the end of the folder did I finally lay eyes on something that looked intelligible.  I paused, reading it through effortlessly.  After a little detective work I realized the crucial difference.  The author of this letter was an Englishman and had composed his German letter in a Latin script resembling the handwriting used by English speakers today, and by Germans who went through grade school after the 1940s.  The rest of the letters, written in the script used by Germans until then, remained illegible to me.  The style of cursive handwriting in the letter, and not the letter’s language, had prevented me from deciphering it. 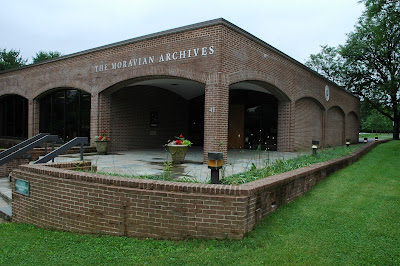 To avoid this predicament when I return to Germany in September, I enrolled this summer in a two-week German script course at the Moravian Archives in Bethlehem, Pennsylvania.  Instruction began with the alphabet.  Along the way we learned how to write, even practicing with quill pens.  By the end, classes ran as I would imagine a doctoral seminar in medieval paleography would.  Sixteen students gathered around tables in a large rectangular formation, heads bent over high-quality reproductions of manuscripts, ably deciphering them under the guidance of two teachers.  Participants came from diverse backgrounds: an undergraduate exploring a German major; a nurse interested in genealogy; several graduate students, librarians, and professors.  Four of the academics were Americanists of some kind, five of them focused on religion, and two were beginning projects on the Moravians.


In fact, learning more about the Moravians proved to be one of the most engaging aspects of the course.  All the documents we read came directly from the local archival holdings; most concerned Moravians and their various activities.  We also toured historic Bethlehem and Nazareth, where the Moravian Historical Society runs a museum in a house originally built for George Whitefield.  Seeing where the brothers and sisters lived and worshipped made the texts we read in class come alive.  Thus the course both trained students to use a new research tool and presented opportunities to apply that tool from day one.  Learning to read German script as a part of this course was never a merely theoretical exercise; it was always based in the study of an actual historical literary culture, that of the Moravians.

The Moravians have recently received significant scholarly attention, from Aaron Spencer Fogleman’s provocative Jesus Is Female, which explores opposition to the Moravians during the Great Awakening, to Craig Atwood’s probing Community of the Cross, which connects the piety of early Moravians in Bethlehem with that of their spiritual father, Nikolaus Ludwig von Zinzendorf.  Some of these authors are affiliated with the Moravians, but not all of them are.  This broader interest corresponds with a trend across the humanities toward work on transnational subjects.  Especially in American history, the tide of transatlantic topics appears to be on the rise.  But as I discovered on my first trip to Germany, doing this research well requires both wading in the waters of printed literature and surfing the waves of manuscript sources.  For people interested in learning to surf, I highly recommend this course.  America boasts no better training ground in this skill than Bethlehem, Pennsylvania, whose mighty Lehigh River once attracted a band of German pietists seeking an outpost across the ocean from their native home.

(I would like to thank the Nanovic Institute for European Studies at the University of Notre Dame for providing a Kate Murphy McMahon Grant to help defray the costs of my participation in this course.)
Email Post
Labels: archives guest posts language skills moravians

Luke Harlow said…
Great report, David. Nice to see Bethlehem and the Moravian archives getting a little love on the blog. I grew up about one mile from the Moravian Archives, and while I wish I could claim a robust academic connection of the kind you're describing, I did paint a couple rooms in the building as part of a college job.
August 20, 2013 at 9:36 AM