Secularists All!, or, Writing Religion and Diplomacy after Preston 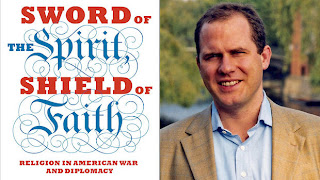 Mark Edwards
Andrew Preston’s Sword of the Spirit, Shield of Faith (Anchor, 2012)  is a monumental achievement in the field of religion and politics—testified to by its winning of Canada’s Charles Taylor Prize for Literary Nonfiction.  A significant accomplishment for a country with (WARNING: 30 Rock reference, not author's opinion) only 700 words in their dictionary.   In many ways, Sword represents the capstone on if not completion of the “religious turn” in Diplomatic History.  For several years now, Preston has been leading a number of scholars trying to convince historians of foreign relations (SHAFR) that faith matters (see Cara Burnidge's important recent post on religion and SHAFR here).  Sword is so successful at tracking religious presence in U. S. foreign policy traditions that it is forcing me to ask a different question: Why is there so much secularism in the diplomatic discourse of the American Century? 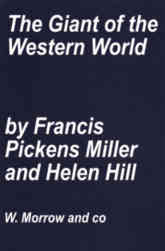 I’m planning on taking up that question in my second (or maybe third, or maybe never) book on the worlds made and remade by Francis and Helen Hill Miller.  As the chairman of the World’s Student Christian Federation (WSCF) and one of the architects of the World Council of Churches (WCC), Miller was a centerpiece of my first book on the politics of ecumenical Protestantism.  He was especially significant in imagining, during the 1930s, the rise of a “World Christian Community” which could stand against the unholy trinity of secularism, corporate capitalism, and hyper-nationalism (totalitarianism).  I am now interested in Miller and his wife (a University of Chicago-trained political scientist and international relations theorist) as agents of secularization, notably in their roles as interpreters of post-WWI global American power.

This new project is less concerned with the Millers themselves than it is about their many “worlds.”  One meaning of “worlds” is the multitude of religious and secular institutions they inhabited.  Arguably the most important was the Council on Foreign Relations.  It should not be surprising that students of religion have ignored the Council, since it has historically had little patience for god-talk.  In fact, one of the apparent purposes for founding the Council was to move diplomacy away from reliance on religious typologies of “Christian” versus “heathen” nations.  Members rather looked to science, and empirical research, as a foundation for what Robert Schulzinger has termed the Council’s “realistic Wilsonianism.”  Of course, faith in scientific over providential knowledge was simply one dimension of the “anarchy” (Amy Kaplan) of the Council’s vision: Science itself was in the service of members’ gendered worldview—their search for “tough-minded” policies to supplant the failed “soft” Wilsonian settlement.  And yet the Council’s self-prophesying secularism was sustained, and even carried forward, by devout Protestant internationalists like Miller and several more mainline church leaders.  The irony of Christian Americans aiding and abetting the secularization of U.S. diplomacy peaked in the publication of Henry Luce’s American Century” article in 1941—a statement remarkable for its godlessness, given that it was penned by a missionary kid.  (Consider, by way of contrast, Henry Wallace’s rejoinder to Luce, “The Century of the Common Man” (1943), which was littered with Christian apocalyptic speech.)

One final admission: While Francis insisted to his dying day that democracy was impossible apart from a Christian moral foundation, there was a corresponding relationship for him and Helen between secularization and democratization.  Put more simply, the Millers were passionate advocates for participatory democracy.  Helen (a disciple of Jane Addams) wrote pamphlets on participatory democratic methods for the Agricultural Adjustment Administration.  In 1938, Francis was put in charge of the Council’s experiment in local foreign policy debate clubs.  Eventually, Miller would make participatory democratization a cornerstone of his campaigns of Governor and Senator in Cold War Virginia.

I’ll be in Princeton at the Mudd Library this August studying Miller’s clubs and many other dimensions of the CFR archives.  After eating too many gyros in the evenings, I’m hoping to read further into secularization theory—starting with John Modern’s “metaphysics of secularism.”  This new direction is admittedly indebted to arguments made some time ago by my graduate advisor Susan Curtis, although Christian Smith’s “Secular Revolution” is also currently written all over it.  As I begin to compile a “to read” list, I thought I’d ask RIAH readers: What secular-ism/ization theory(ist) can’t you live without?
Email Post
Labels: Andrew Preston archives ecumenical movement religion and foreign policy religion and politics secularism secularization