For an Americanist like myself, to study the Hebrew Psalms is to be reminded and humbled at what a relatively short segment of Judaism and Christianity has taken place in North America. Yet as readers of this blog know, the Psalms have been here as long as Europeans. Psalms were chanted and sung by the earliest Spanish and French explorers and missionaries. The Bay Psalm Book was the first English-language book published in America (and now, as Boston's Old South Church knows well, one of the most valuable). 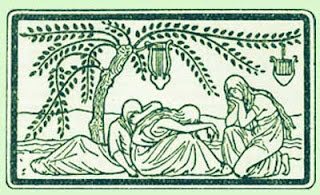 My own research has focused on a particular psalm, 137, "By the Rivers of Babylon," which has had a notably interesting reception over the millennia. Psalm 137 is an encapsulation of exile. Its nine verses invoke a complex admixture of loss, humiliation, defiance, memory, and vengeance. I began this project by examining its presence in American culture, starting with the Pilgrims' Ainsworth Psalter (1612) and Puritans' Bay Psalm Book (1640) through deployments of the psalm by William Billings, Frederick Douglass, and Rev. C. L. Franklin, up to recent adaptations by the Melodians, Godspell, Don McLean, Leonard Cohen, and Matisyahu.


Thanks to a year-long research fellowship at Yale's Institute of Sacred Music (an experience I highly recommend) I've been able to read more broadly and deeply in the original context of 6th century BCE Palestine and Mesopotamia, map its interpretation by church fathers like saints Augustine and Benedict, appreciate the psalm's salience during the Reformation and its resonance during the horrors of the Holocaust. Taking advantage of fortuitous timing, I audited a course on the Psalms in literature and music taught by Peter Hawkins, a scholar of literature best known for his work on Dante, and Markus Rathey, a musicologist who specializes in Bach.

The reception of the Psalms among Jews and Christians across the ages and continents is endlessly fascinating. A superb introduction to this complex history is The Psalms Through Three Thousand Years: Prayerbook of a Cloud of Witnesses (1996) by William Holladay, which ends with a incisive readings of Psalm 23 in America. Two recent edited volumes are
--> Psalms in the Early Modern World (2011), which includes a fine chapter on the social and cultural significance of the Bay Psalm Book, and the just-published Jewish and Christian Approaches to the Psalms: Conflict and Convergence, edited by Susan Gillingham. The latter mostly bypasses America except for an intriguing chapter on the challenge of creating contemporary psalm translations in America's hothouse commercial Bible marketplace; Bible consumers expect to find traditional phrasings despite the proliferation of translations and editions. Not to be missed is Hannibal Hamlin's Psalm Culture and Early Modern English Literature (2004).
Email Post
Labels: bible christianity Judaism Judeo-Christianity Psalms religion and literature religion and music stowe's posts

What have you found in terms of the reception of the final verse of Psalm 137? It's interesting that such a beautiful psalm ends with a verse that at least contemporary readers often find highly disturbing.
July 21, 2013 at 4:49 AM

Michael Utzinger said…
I'd be curious about John's question too. I notice that lectionaries today often remove the end of Psalm 137
July 21, 2013 at 1:31 PM

David Stowe said…
That final verse--"happy shall he be who taketh and dasheth thy little ones against the stones"--has been a bone of contention for eons. Augustine allegories it, following a hermeneutical tradition that probably originated with...Origen. "Who are the little ones in Babylon," he asks? "Evil desires newly come to birth....make sure it does not survive your violent treatment: dash it on the rock. And the rock is Christ." St. Benedict also read it that way. Reformation-scarred Protestants like Calvin and Edwards were more likely to take the verse literally. The entire psalm is regularly recited by many Jewish Orthodox communities for Tisha B'av and before the Blessing for Food, though the final verses are not found in Conservative or Reform prayer books since the nineteenth century. Most contemporary theologians seem to advocate acknowledging violent rage in the face of overwhelming injustice but to submit that anger to God liturgically rather than enact it.
July 21, 2013 at 6:22 PM

You've got a live wire here: The Psalms are---at least were--somewhere between a Rorschach test and the Rosetta Stone of America's true "civil" religion.