Much More than Salem: America Bewitched 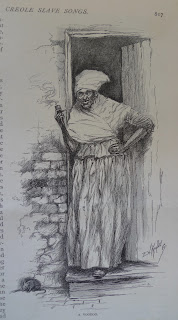 In the early hours of the morning on January 5, 1895, Mrs. Baptiste, “a colored woman,” found “a small black coffin” in front of her residence in New Orleans at Royal Street and Caffin. Once Baptiste realized what was on her stoop, a large crowd of residents congregated at her house and “considerable excitement prevailed.” Sergeant Hevron of the Fifth Precinct arrived and “took charge of the box.” With a hatchet he pried off the coffin’s lid and inside revealed “several candles, a wire mask, and a shirt made out of a oat sack” arranged in such a way as “to represent a body.” For her part, Baptiste was “badly frightened” of the coffin since she “terms herself a voudou.” Her own house had been raided by the police before and “a lot of snakes in bottles, bones, and bundles of letters from her victims” had been uncovered. While it was unknown who placed the coffin at her door, it was clear that they meant her harm. (Story and quotes from “A Voudou Victim. A Coffin on the Doorstep Creates a Sensation,” 6 January 1895, The Daily Picayune; image from George Washington Cable, "Creole Slaves Songs," The Century Magazine, April 1886).

Stories like this, of people seeking supernatural powers to work their will, proliferate throughout American history. As Owen Davies’s recent book America Bewitched: The Story of Witchcraft After Salem (OUP, 2013) demonstrates, America’s relationship with witchcraft did not conclude with Salem in 1692. America Bewitched is an enjoyable read, and one that served as a nice break from working on my dissertation. The book is geared towards a popular audience and so it reads at a pleasant pace with little theory. The chapters are full of story after story of witches and witchcraft in American history from the seventeenth century through the twentieth. The bulk of the prose is narrative surrounding these stories, which range from entertaining or funny, but are more often tragic and gruesome. 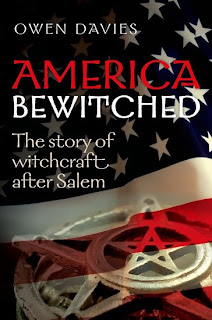 As a book written for a wide audience, the book is not argument driven, but this does not mean that it makes no contributions. One of the book’s main strengths is Davies’s attention to the interactions and overlap between the witchcraft beliefs, practices, and fears of early Euro-Americans, recent immigrants, Africans and African Americans, and Native Americans. The porous nature of ideas regarding witchcraft illuminates the realities of what happens when various groups live close together in towns, on plantations, and in tenements. The result is a fascinating tale with a myriad of actors. Additionally, Davies covers witchcraft in all different places and spaces—Alaska; the West; New Orleans; western Pennsylvania; Santa Fe; Norfolk County, Virginia; Galveston, Texas; San Francisco; Memphis; and the Five Points of New York City. Davies finds accusations, folklore, and court cases involving witchcraft from all across the country, dispelling any notion that “superstitious” people are found in any one kind of place or one kind of community.

Davies chose to organize the book thematically rather than chronologically, though the final chapter concludes with Wicca. Those interested in religion and law will find Chapter 3, “The law” and Chapter 7, “Insanity,” of particular interest for Davies’s attention to how court cases involving witchcraft accusations proceeded, how slander cases often resulted from accusations, and how some murder trials of supposed witches helped shape the insanity defense. Material culture scholars too will find much in America Bewitched’s pages, including witch balls, feather wreaths stuck in pillows, tree plugs, and amulets. And anyone interested in cultural interactions and exchanges will find the whole book worth reading.

My main complaint with the book (outside of not liking the cover, and yes, I know that’s a bit of a trite gripe) is its lack of a definition of witchcraft. From my read, witchcraft is understood to mean what his historical subjects take it to mean, which is not inherently a scholarly move with which I disagree. But it obscures how and why certain practices were taken to be witchcraft in one time period. It also leaves me wondering why certain practices might be witchcraft and others not. Were all appeals to the supernatural witchcraft? Mesmerists and Spiritualists were perhaps accused of witchcraft in the newspaper, but Davies writes that “the [news]stories were not always concerned with witchcraft per se, but the actions of mesmerists and spiritualists” too (90). It seems as though Davies had a particular understanding of witchcraft in mind, and this reader would have liked to seen it clearly in print. This could clarify why Davies felt the need to speculate on certain topics, such as whether or not certain “witch murderers” may have suffered from real mental illness or disorders.

Davies states that “we should not consider all such magical practices as timeless and static,” and this statement, along with Davies’s book, open a space for another book: one that interrogates how and why the category of witchcraft has changed in American history. Davies’s definition of witches does identify some helpful markers for the reader. “Motivated by the disruptive forces of spite and envy,” he says of witches, “they were troublemakers, the spreaders of sickness, sowers of discord” (67). As such, witchcraft is always a negative thing in Davies’s narrative, until witches are reinvented in the later twentieth century by Wiccans.

Davies does provide a nice breakdown of the three main “sorts of witches” one finds in American history: the outsider witch, the conflict witch, and the accidental witch. Accusing someone of witchcraft could do political work for the accuser, could serve as a strategy in feuds, or could be the result of some unhappy coincidence. All three of these categories underline an important strength of Davies’s work: his attention to the cultural interactions of his subjects. I wonder if centering the book’s focus on the story of witches in America, rather than witchcraft, might have been a clearer organization. Regardless, America Bewitched is an enjoyable read and covers a wide geographic and temporal spectrum. It could work well either in sections or in whole in various American religious history classes. Students will appreciate its readability and vast array of stories. And it helps demonstrate the numerous ways communities in the U.S. interact with and influence one another.
Email Post
Labels: emily's posts new books salem witch trials witchcraft

Carol Faulkner said…
Thanks for this post! I'm reading Andrew Jackson Davis's autobiography, The Magic Staff, published in 1857, and I was initially surprised to find references to witchcraft/superstition. For example, his parents thought a neighbor had put a spell on their cow, and an old woman thought she had been cursed by a note written by her neighbors. Davis uses these examples to show the difference between what he represents (harmonial philosophy/spiritualism) and ignorance/superstition. He was aware that his critics might accuse him of something similar.
July 25, 2013 at 6:08 PM