Beyond Religious Boundaries: Thoughts on David Cannadine's "The Undivided Past"

Of all the insightful moments that transpired at the Religion and American Culture’s conference in June- see some related recaps here and here - it was a short comment by Jon Butler that has haunted me a bit.  In the meeting’s very first session, entitled “Fifty Years of Non-Sectarian Study of Religion: Goals, Limitations, Expectations,” Butler noted that although scholars have opened the range of their potential subjects to include a host of non-Protestant traditions, histories are still generally written through a rather narrow tradition-specific purview. We have histories of Christianity in America, or Judaism in America, or Islam in America - but broader histories of religion still seem elusive.

As much of my recent reading has dealt with questions of religious pluralism recently, Butler’s comment has regularly resurfaced since the conference. Yet if many of us would readily nod in agreement with the observation, such assent comes with a number of troublesome questions: what would such a history look like? What does it mean to move beyond sectional, denominational, or tradition-oriented histories, and to work toward histories of American religion writ large? And how do we do so in a way that recognizes religion as a constructed category, indeed as a category produced in part by past and present scholarship? 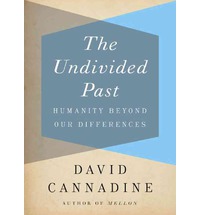 David Cannadine’s recent The Undivided Past: Humanity Beyond Our Differences offers one potential response. Historians and other scholars, Cannadine writes, have long been seduced by stories of conflict, particularly by conflicts that pivot on issues of nation, religion, race, class, gender, or civilization. Cannadine argues that the tendency to dwell on conflict between collectives or identity groups obscures the extent to which humans have found ways to co-exist despite their differences. They smooth otherwise complicated, wrinkled histories into relatively simple tales of good and bad, of right and wrong. Taking each of the categories above he demonstrates how, by emphasizing man’s antagonistic relationships, the variety of strategies for coexistence and the efforts of those who have sought to transgress and transcend such divisions are downplayed or lost altogether.

In the case of religion, Cannadine uses three relationships that have generally been understood as oppositional to bolster his claims: Pagans and Christians in the Roman Empire, Christianity and Islam, and Protestants and Catholics in the wake of the Reformation. Although he emphasizes that he is not downplaying conflict itself, he traces a range of ambiguities and exceptions within these examples to challenge our popular narratives of religious conflict. In matters of Protestant and Catholic relationships, for instance, he returns to the Reformation period to consider how the very division that supposedly drove the period did not immediately result in clear or firm boundaries of collective identity, nor did it shut off all productive communication between the opposing sides. Practicality, proximity between would-be opponents, and local traditions dampened rivalries as often as they sparked them, resulting in new and creative responses to questions of diversity. This was especially true at the level of everyday activity, Cannadine suggests: “Most ordinary people, left to their own devices and decisions, were eager to continue living with their neighbors, whatever their unresolved religious differences, and despite what prelates and princes urged, they were not minded to denounce or to kill those of other faiths.” In other words, echoing a theme that runs throughout the book, battles between Protestants and Catholics were primarily the concerns of the elite rather than the common man.

The larger goal of Cannadine’s text is to get us to think beyond the confines of these categories, to recognize their limitations as filters for historical analysis. In this sense, one might read The Undivided Past as an extension of the field's (re)turn toward transnational scholarship. Where advocates of transnational research point out the ambiguity and fluidity of national borders, whether physical or conceptual, Cannadine is taking on a number of categories all at once. Furthermore, he is suggesting a fundamental reorientation in how historians choose, approach, and give life to their subjects. He urges us to look to those fuzzy, in-between spaces, where clear conceptual divisions start to get messy and complicated, and his examples suggest that much of this might be found at the ground level of everyday life.

If we think about the text in relation to Butler’s assessment of American religious history as a field, Cannadine’s model would seem to guide us toward subjects that explore interreligious relationships beyond simple narratives of conflict or collaboration, of outsider/insider or minority/majority status, toward the sort of working relationships formed in the midst of everyday life. (I am eager to read Andrew Stern’s Southern Crucifix, Southern Cross: Catholic-Protestant Relations in the Old South, discussed here, for this very reason, as his work seems to be attuned to the potential for both opposition and friendship, for articulating difference and forging or uncovering commonality.) This sort of scholarship could not only broaden our framework beyond lines of denomination or tradition, but may also offer the opportunity to assess how larger social or cultural events affect traditions, and even the production of religion as a conceptual category, beyond boundaries of difference. To pick a completely random example: how did the turmoil of the Great Depression, its economic conditions and the various social and cultural consequences produced by those conditions, affect not just a single denomination or tradition - Protestants *or* Catholics *or* Jews, etc. - but how did it affect religion in its myriad forms and meanings? How did it affect relationships between these groups? In this sense, consideration of Cannadine’s text moves us to recognize the potential commonalities of religious traditions and experiences in a shared space and time, as institutions, practices, and beliefs, that may be subject to the same events, the same social and cultural influences, or the same political challenges. How each tradition processes those events will certainly be different, and there will be different responses within each tradition itself, but by putting their experiences side-by-side with each other, we may take a step toward a larger understanding of American religious history.

If we follow Cannadine’s suggestions, we perhaps run the risk of falling to the opposite end of the spectrum, where we over-emphasize “positive” interreligious relationships, or we fall into the trap of reducing meaningful and real conflict, and the differences that support such conflict, to some sort of aberration. And while he certainly recognizes religious difference as itself constructed, and as absolutely intertwined with innumerable other factors (race, class, gender), religion itself is not approached as critically as one might hope. Cannadine’s text does not do as much to identify and critique the very sites where models and ideologies of religious difference are produced, or how strategies for coexistence almost inevitably draw new boundaries of inclusion/exclusion. In this respect, we may need to balance the aspiration to interrogate and work beyond conventional religious divisions with the suggestions of scholars like Courtney Bender and Pamela Klassen. Their introduction to their edited collection, After Pluralism: Reimagining Religious Engagement, as well as the essays included in the volume, not only explores some of the ambiguities of interreligious encounters, as Cannadine suggests, but also considers the extent to which pluralism, as a specific and constructed ideology that serves to negotiate religious diversity, itself codes interreligious relationships, redrawing old boundaries and creating new ones, and sanctioning certain types of relationships while discouraging others. As a starting point for expanding our scholarship beyond the confines of a given religious tradition, however, The Undivided Past is useful precisely because of its broad historical strokes and its provocative analysis.

Mark T. Edwards said…
Thought-provoking post as usual, Trevor. I think Cannadine's point about elite conflict obscuring continuity would certainly apply to the Fundamentalist-Modernist controversy of the 1920s, an event remarkable for how little institutional shake-up actually occurred. Of course, to your point about overemphasizing continuity, those close to the PCUSA-OPC-Princeton Seminary-Westminster Seminary fights would say I'm mistaken. Isn't this partly an issue of personal temperament: There are scholars of continuity, and there are scholars of difference, and that divide is as much a matter of interpretation as it is "evidence?"
July 5, 2013 at 11:24 AM

Trevor Burrows said…
Thanks, Mark. I think you're absolutely right: personal temperament and perspective plays a huge role in questions of continuity, difference, and commonality. While I like Cannadine's suggestion for a reorientation toward commonality, I struggle with him on precisely this issue. Perspective matters, and in all of these matters - not just religion, but race, class, gender - there are matters of power that risk not being addressed, and a whole host of voices that risk not being seriously heard, in an effort to rescue histories of humanity's potential unity.

The F-M conflicts would certainly merit some good questions in this regard, and your point about institutional change is very interesting. Perhaps the best place to test Cannadine's argument in that respect is at the ground level: in congregations, or even small towns, where the level of intimacy between neighbors and congregation members makes division over theology and cultural issues something truly threatening to community integrity. I suppose Cannadine would want us to simply shift our perspective and emphasis: who works to avoid or negotiate through such conflicts? To dampen their effects? How do we measure the true "depth" of such conflict?
July 7, 2013 at 6:45 AM