Clarence Darrow, in his closing argument in defense of Nathan Leopold, blamed his role in the murder of fourteen-year-old Bobby Franks on Friedrich Nietzsche: 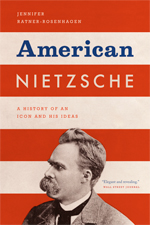 He grew up in this way. He became enamored of the philosophy of Nietzsche. Your Honor, I have read almost everything that Nietzsche ever wrote. He was a man of a wonderful intellect; the most original philosopher of the last century. Nietzsche believed that some time the superman would be born, that evolution was working toward the superman. He wrote one book, Beyond Good and Evil, which was a criticism of all moral codes as the world understands them; a treatise holding that the intelligent man is beyond good and evil, that the laws for good and the laws for evil do not apply to those who approach the superman. He wrote on the will to power. Nathan Leopold is not the only boy who has read Nietzsche. He may be the only one who was influenced in the way that he was influenced.

...Why should this boy's life be bound up with Frederick Nietzsche, who died thirty years ago, insane, in Germany? I don't know. I only know it is. I know that no man who ever wrote a line that I read failed to influence me to some extent. I know that every life I ever touched influenced me, and I influenced it; and that it is not given to me to unravel the infinite causes and say, "This is I, and this is you." I am responsible for so much; and you are responsible for so much. I know that in the infinite universe everything has its place and that the smallest particle is a part of all. Tell me that you can visit the wrath of fate and chance and life and eternity upon a nineteen-year-old boy! If you could, justice would be a travesty and mercy a fraud.

Many readers of this blog will recall that at the next year's Scopes Trial, William Jennings Bryan made hay out of Darrow's Nietzsche-based defense of Leopold and Loeb.

In her recently published American Nietzsche, Jennifer Ratner-Rosenhagen elegantly traces the history of the many ways Americans responded to the German philosopher and cultural critic. For an appreciative and critical review of the book, see this in the NYT. The reviewer calls it a "sober work of intellectual history," which is true, though it's also written in clear and engaging prose and thus is more interesting and more accessible than most such sober works.


Two things caught my attention as I paged through Ratner-Rosenhagen's book. First, in her prologue she discusses Nietzsche's fervent admiration for the writings of Ralph Waldo Emerson, who anticipated at least some of the former's ideas. She notes that Nietzsche's volumes of Emerson were "worn from repeated use, their texts scarred with underlines, and covers, margins, and even flyleaves covered with notations." The notations included "eruptions of approval": "Bravo! "Ja!" "Sehr Gut!" "Herrlich!" "Das ist wahr!" I will now make it a habit to shout "Ausgezeichnet" periodically whenever I read "Self-Reliance." Nietzsche discovered Emerson at a young age, when at a boarding school. Emersonian skepticism was a major factor in the corrosion of his faith. "It was Emerson," Ratner-Rosenhagen writes, "who first instructed Nietzsche about the joys and terrors of the intellectual life without firm land beneath one's feet, of life on the open waters of indeterminacy without compass or guide." By no means did Nietzsche ape Emerson's ideas. Instead, Emerson was a guide, a writer who helped Nietzsche understand how a philosopher should proceed.

One of the most fascinating chapters in American Nietzsche concerns how American Christians assessed the German's philosophy in the early twentieth century. Naturally, many were alarmed, given Nietzsche's withering criticism of religious faith and Christian moralizing. In particular, Nietzsche pointed out that the abandonment of the "Christian God" necessarily called into question the perpetuation of "Christian morality." "When one gives up Christian belief," he argued, "one thereby deprives oneself of the right to Christian morality." The latter argument confirmed the worst fears of theological conservatives while making theological liberals more than a bit nervous. Nevertheless, Ratner-Rosenhagen takes the time to carefully document a broad range of American Protestant and Catholic reflection upon the meaning of Nietzsche's critiques. A fair number of modernists in particular saw Nietzsche's philosophy as a needed critique of ossified faith and one that "could also serve as a balm that might help strengthen and revitalize the core of Christian belief." Many, indeed, agreed that Nietzsche had provided a "service" to the church by identifying genuine the problems of modern spirituality. Nietzsche was a bitter tonic, but it was better to take one's medicine and get on with the cure. Some also appreciated Nietzsche's characterization of the "strenuous life." A few even posited the German philosopher as a "model ascetic," akin to a secular savior.

All of the above suggests, as Ratner-Rosenhagen argues, that in "their vigilance to identify secular sources of American Nietzscheism, theologians and clerics failed to appreciate their own roles in spreading his gospel." After all, they repeatedly talked to their flocks about how dangerous and influential Nietzsche's ideas were and sought ways to appropriate those ideas for their own religious goals.

These few brief glimpses do not begin to introduce the elegance and sophistication of American Nietzsche. Much like the German philosopher himself, Ratner-Rosenhagen's book merits careful study.

Tom Van Dyke said…
"Chloroform unfit children. Show them the same mercy that is shown beasts that are no longer fit to live." ---Clarence Darrow*

And William Jennings Bryan was the bad guy, eh?