American Civil Religion: Never Leave the Country Without It (a photo essay on God, liberty, and democracy in the American passport)

As I recently discovered when I renewed my passport, the State Department completely redesigned the American passport in 2007. Our post-9/11 world necessitated this update, as the new passport contains security features that include a computer chip with the owner's digital image and biographical information. Yet the State Department not only incorporated new technology. It also replaced the bland interior pages that had faint state seals in the background with striking images and quotations in support of the passport's theme: "American Icon."

And, indeed, what immediately struck me is how the passport can serve as an icon of American civil religion. As Raymond Haberski has demonstrated in his recent God and War: American Civil Religion since 1945 (discussed on our blog here), civil religion operates as a broad, malleable set of myths concerning the relationship between the American experience, God, and metaphysical national ideals such as liberty, equality, and justice. Civil religion inspires, justifies, and even sanctifies sacrifices made on behalf of these ideals.

Unlike the previous spartan version, therefore, the new passport has more than a utilitarian purpose. It stands as a type of public text and symbol. It offers a civics lesson about the nature of our country and its citizens. Together, the writing and the pictures tell a patriotic story, a myth, centered around the God-given blessings of liberty and democracy embodied in the United States. For those of you who have not seen the new passport (or have not examined it recently), I reproduce much of it below:

The inside cover cites our national anthem to herald our country as "the land of the free and the home of the brave." The initial page contains the first of two quotations from Lincoln's Gettysburg Address to evoke the need to sacrificially defend democracy. 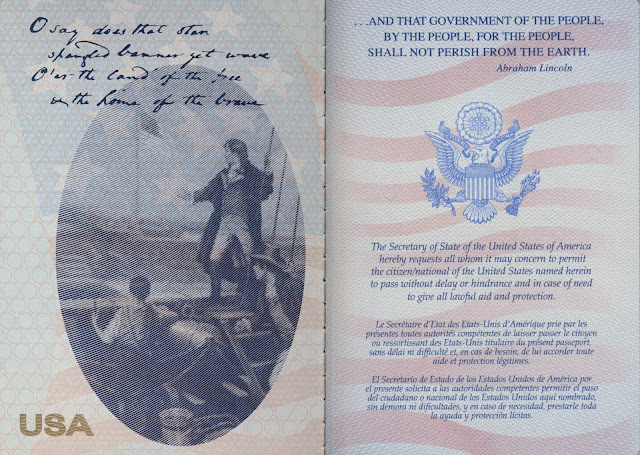 Pages 2 contains the holder's photo and information, while page 3 puts the holder's signature below the American eagle, flag, and preamble to the Constitution. 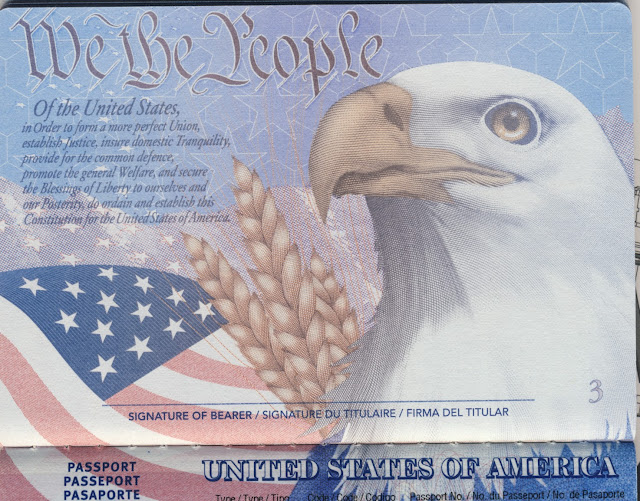 After several pages of logistical information, the visa pages begin with George Washington's idealistic hope for the new nation and images of the United States' initial claims of liberty and independence… 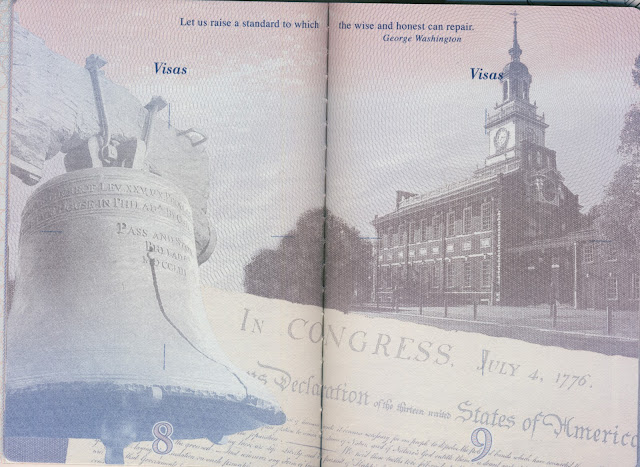 …followed on Pages 10 and 11 with the lines in the Declaration of Independence regarding the inalienable rights with which the Creator endows people. 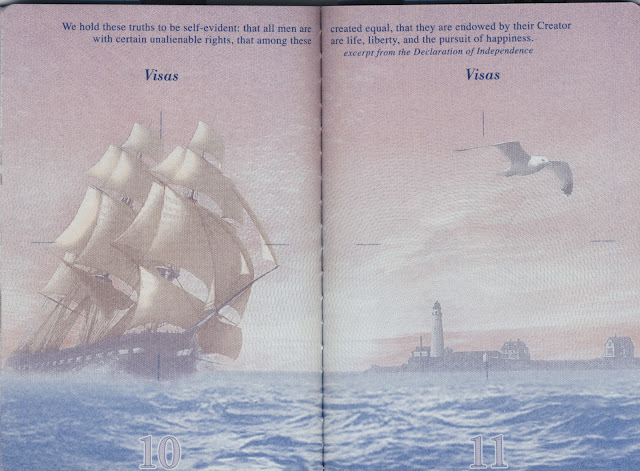 Pages 12 and 13 appear aspirational, with a quote from Martin Luther King, Jr. that asks God to allow America to be true to the "great dream" of 1776. 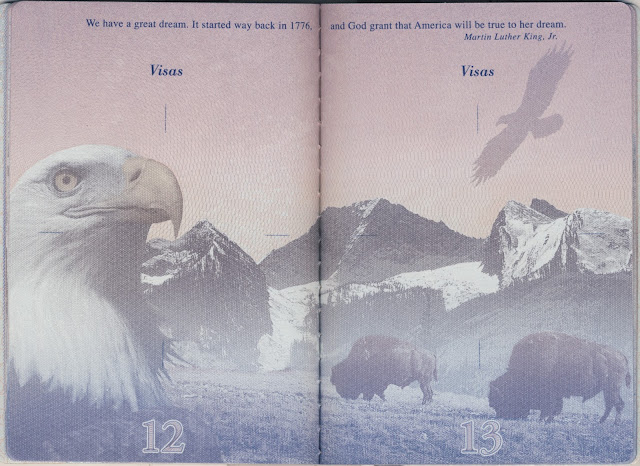 Similarly, on pages 16 and 17, a statement from Dwight D. Eisenhower seems to warn against American hypocrisy (perhaps this quote would have been better placed in conjunction with the one on pages 26-27). 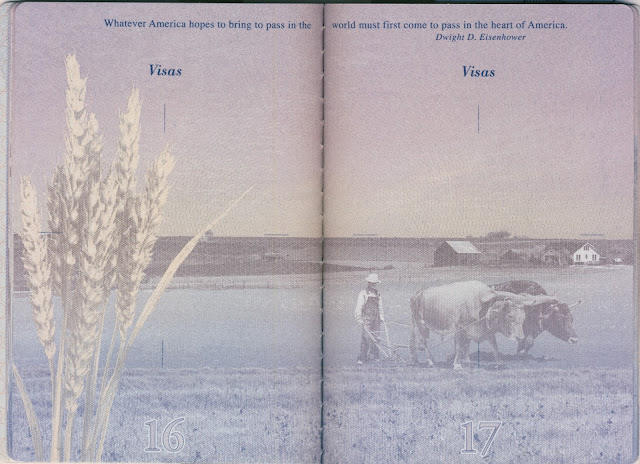 Pages 20 and 21 contain a 1869 inscription from Utah's Promontory Point (where the transcontinental railroad was completed) asking God to "continue the unity of our country"--a poignant request in the immediate aftermath of the Civil War. 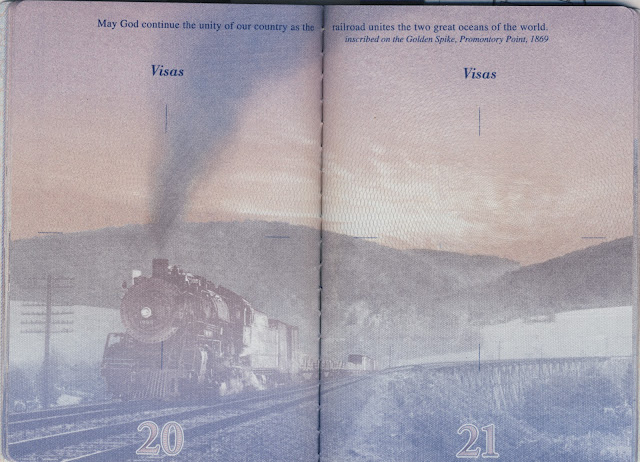 Against the backdrop of the Statue of Liberty, pages 24 and 25 cite Anna Julia Cooper (an African-American educator, scholar, feminist, and civil-rights activist) in claiming that the cause of freedom is a birthright of all people--regardless of race or class. (Alas: Cooper is the only woman quoted in the passport.) 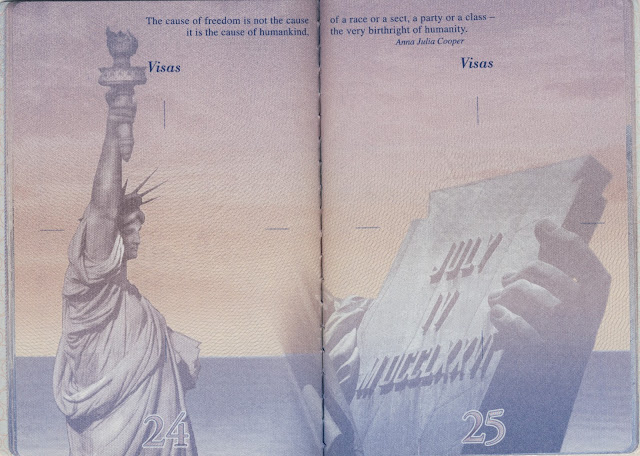 The following pages, 26 and 27, contain John F. Kennedy's promise to every nation that the United States will "pay any price, bear any burden, meet any hardship, support any friend, oppose any foe, in order to assure the survival and success of liberty." This promise carried extra resonance when the new passport was issued during the presidency of George W. Bush. 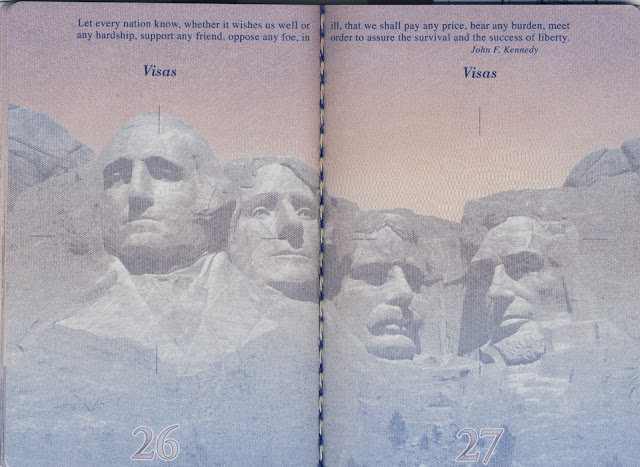 Several pages later, on 32 and 33, the passport includes a call by the nineteenth-century Texan patriot and statesman Jose Antonio Navarro to sacrifice one's life if necessary to defend "the American banner." 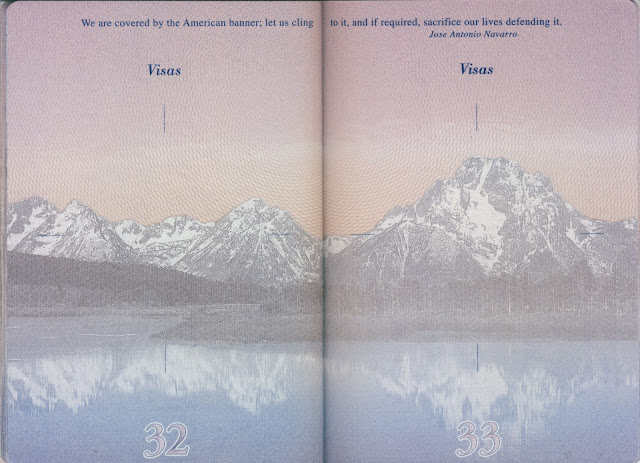 The second quotation from Lincoln's Gettysburg Address--his claim that soldiers had not died in vain but rather had sacrificed themselves "that this nation, under God, shall have a new birth of freedom"--is on pages 34-35. 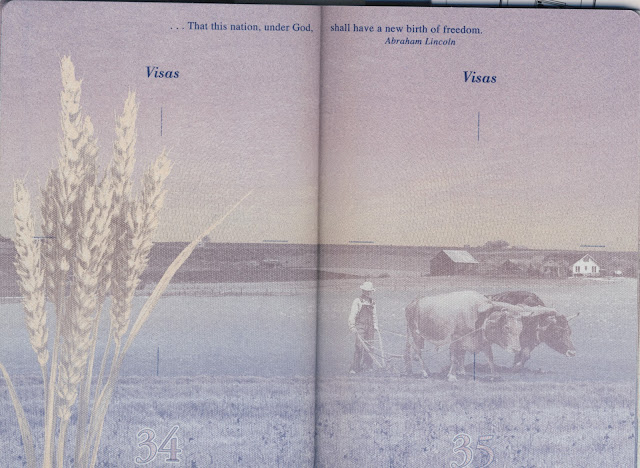 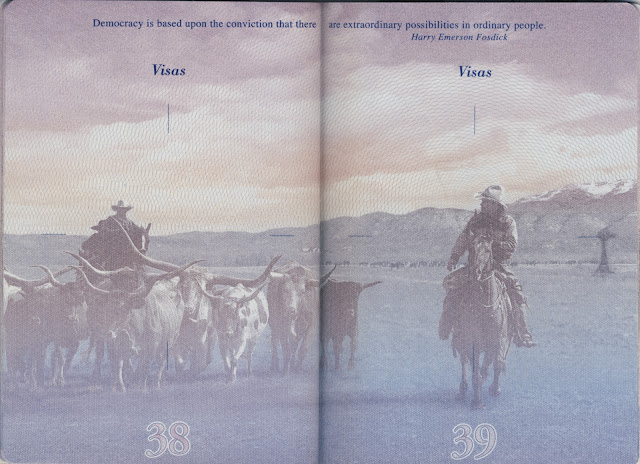 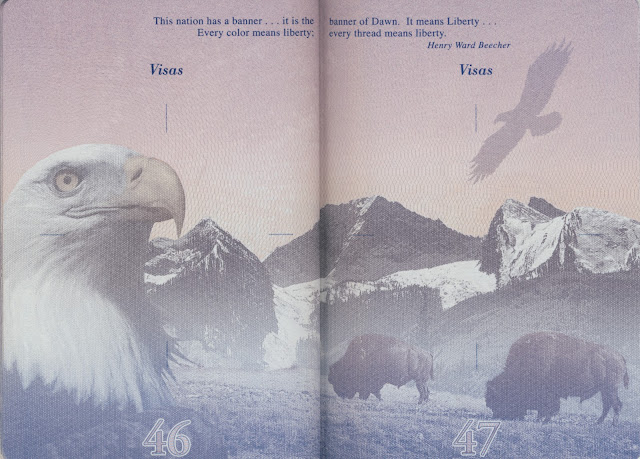 Finally, the passport closes on pages 50-51 with a simplistic quote from Thomas Jefferson that surely warms the heart of David Barton and his fans: "The God who gave us life, gave us liberty at the same time." 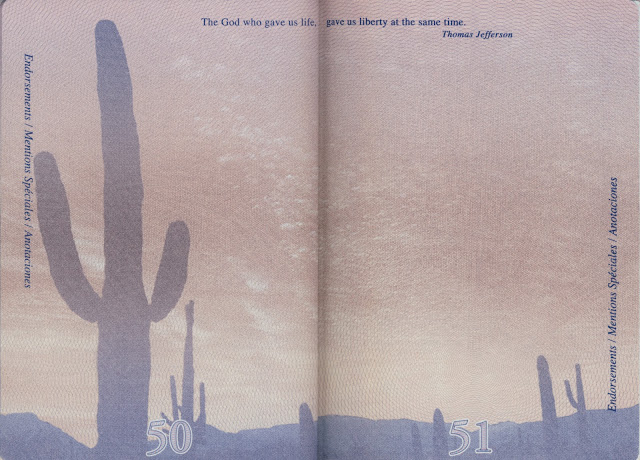 While I do not want to overstate the case, I believe that the passport suggests a potentially powerful narrative of civil religion. I can only imagine the reaction of foreign officials who are forced to confront these patriotic images and claims as they process the entrance of American citizens to their countries. In fact, I plan to ask what (if any) reaction one of these harried officials has to American passports during my next international trip. Let me know if you do the same.
Email Post
Labels: brantley's posts civil religion

RAJ said…
Wonderful commentary-- as a scholar who deals with the juxtaposition of the visual and the textual, I also wonder about the messages being conveyed through the images.
July 26, 2013 at 6:09 PM

Brantley Gasaway said…
Thanks for the replies. When I teach on civil religion this next semester, I am going to give these pages to my undergraduates and ask the students to interpret the passport as a primary document.
July 27, 2013 at 8:09 AM