An ambitious and consistently surprising patchwork of online music, The Devil’s Traxionary was created by Scott Michaelsen, an English Department colleague at Michigan State, and Anthony Shiu, a PhD in American Studies from MSU who now teaches at University of Missouri-Kansas City. 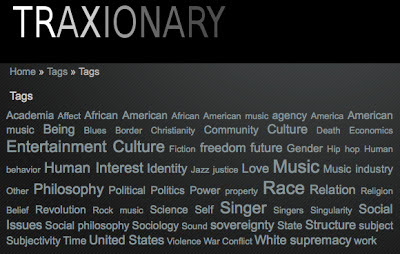 Beginning on 1/1/11, with the Bee Gees’ “I Started a Joke,” and continuing for more than two years, Michaelsen and Shiu posted a song a day (two on Saturday and Sundays). 1001 songs total.  Each with a pithy, sometimes densely theoretical critique that riffed in a few sentences on the interplay of lyrical content and sonic signifiers. Then, finding they couldn’t stop, Michaelsen and Shiu started up again in March, now posting songs every other day.

Readers of RiAH may find Traxionary entertaining if not useful in a number of ways. First, it will almost certainly expose you to a broader range of contemporary musics than you will have ever experienced otherwise. Second, it is well indexed and eminently searchable. You can search by song title here or by artist here. The songs are thoroughly tagged. So, for example, a search for “Christianity” turns up these:
“John Said He Saw the Number” (Arizona Dranes)
"Holy Ghost" (The Bar-Kays) [Don't miss this one!]
“I’m Working on a Building” (Carter Family)
“Holy War” (Blackhouse)
“Strange Things Happening Every Day” (Sister Rosetta Tharpe)
“The Beast” (Twisted Sister)
"Penitentiary Philosophy" (Erykah Badu)
"Working on a Building" (Cowboy Junkie)
"With Arms Wide Open" (Creed)
"You Don't Know Jesus" (Mogwai)
“In the Beginning” (Aube)
"Methodist Coloring Book" (The Dead Milkmen)
"I Am a Pilgrim" (Merle Travis)
“So Many Things Have Got Me Down” (The Search Party)
“The Lord’s Prayer” (Siouxsie and the Banshees)
"Gloomy Sunday" (Lydia Lunch)
"My Goddess" (The Exies)
“Iron Man” (Black Sabbath)
"Give It Revolution" (Suicidal Tendencies)
"Disposable Teens" (Marilyn Manson)
"Bye Bye Badman" (The Stone Roses)
“If I Had My Way I’d Tear the Building Down” (Blind Willie Johnson)
"Invasion of a Megaforce" (Eloy)
"Mirrorful" (Jawbox)
"Afraid to Shoot Strangers" (Iron Maiden)
"Undecided" (The Ames Brothers w/Les Brown and His Band of Renown)
"April" (Deep Purple)
"Exploration Vs. Solution, Baby" (90 Day Men)
"Couldn't Stand the Weather" (Stevie Ray Vaughan)
“Will the Circle Be Unbroken” (George Jones)

Here's what Traxionary had to say about that last one, with George Jones and friends:
Christianity prays for a circular temporality--for an experience of time which fully reverses itself, and in which the scatteredness of beings is accounted for and recouped. In this vision of history, one is saved literally, like a penny in a jar. Given such a model, in which there is no loss or death, one might conclude that “Christian ethics” is a contradiction in terms, and literally cannot exist; or, that it’s really just a variant of a generalized moral frugality, and therefore begins and ends with Ben Franklin.
“Religion” brings up dozens more songs, including:
"Source Tags and Codes," by And You Will Know Us by the Trail of the Dead;
"Gun Sale at the Church," by Beat Farmers;
"The Floating Pyramid over Frankfurt that the Taxi Driver Saw When He was Landing," by Chicks on Speed;
“Surprise! You’re Dead!” by Faith No More
And a song that should be mandatory for every reader of RiAH: John Cage's  "Apartment House 1776" (New England Conservatory Philharmonia)


While you’re at it, here are some other keywords that turn up interesting songs: abjection; difference; alterity; singularity; counterhegemony; Jacques Derrida; nothing.
What’s not to like about the Devil’s Traxionary? Depending on your taste for Continental philosophy, the commentaries can be obscure, the parentheses-play a bit excessive at times. Some of the links don't work now. Sometimes the tone is snarky; it can be jarring to find a song or artist you always liked, without much reflection, being deconstructed by critical theory. But the comments are always succinct and usually penetrating; in many cases you'll hear the song differently than you ever have before.

Paul Harvey said…
David: wow, this is fantastic, just did some random clicking around and found some classic encapsulations already. Thanks for alerting us.
June 22, 2013 at 1:08 PM