Some readers might know about the Organization of American Historians Distinguished Lectureship Program.  In 1981 OAH president Gerda Lerner launched the initiative as "a speakers bureau dedicated to American history."  Participants traverse the US, speaking at universities, high schools, libraries, and community centers on subjects ranging across time and place. 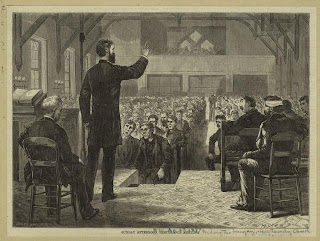 In the past few years quite a number of the lecturers appointed happen to work on some aspect of American religious history.  I was fortunate enough to be named a lecturer starting this year, along with fellow blogmeister Paul Harvey, and some other scholars in the field: Angela D. Dillard, Darren Dochuk, Kevin M. Kruse, and Melani McAlister.  (Shameless pitch: Invite us to your college or university!)

Maybe the number of those with a religious focus is a reflection of the current popularity of religious history, and a sign of the growing number of scholars who study religion.  Six years back, James O'Toole wrote a piece for Historically Speaking about the rising stock of the subfield.  (I included that in a short book I edited for the University of SC Press.) Writing about the "Post-Ahlstrom" era, O'Toole observed:


I think, it has become easier to connect the history of religion to other areas of historical study, and this is a very positive development. Religious history has often seemed marginalized from other historical writing. Leslie Tentler of Catholic University tells of an Organization of American Historians’ session in 1990 on “new directions” in Catholic history. “It’s too bad,” one member of the audience said in the discussion that followed the papers. “You folks do interesting work. But you’ll always be marginal to the profession.” The same might have been said to those who worked on religion elsewhere. Some of this marginalization was no doubt attributable to religious historians themselves, though there were other reasons for it, too. My own view (which I can’t prove) is that the secularization of the academy and the people who pursue careers in it contributed to this as well. In any event, religion was reduced to Jon Butler’s already-famous “Jack in the Box” phenomenon. It popped up into view periodically—Prohibition and the Scopes Trial in the 1920s, politically active fundamentalism in the 1980s—but then it was stuffed back down into the box while other historical tunes began to play. By studying the religious experience of people who continued to go to church even when no one was watching (that is, while Jack was safely stowed inside the box), practitioners of the lived religion approach could see how religion influenced and was influenced by other historical themes, including the reigning historiographical Holy Trinity: race, class, and gender. Work on black churches has been particularly successful at this, and the potential for studying religion through the lens of gender seems to me to be only now being realized. The questions to be asked aren’t just about women and their religious experiences; they really are about gender as a category. Here is an opportunity for religious history to move decisively from the margins to the center.

This is all an encouraging sign of life for the history of religion. Religious historians have often felt that they get no respect—or enough respect—from their colleagues. But there is evidence that this is less so now than it was in the pre-Ahlstrom era. I was pleasantly surprised, for example, when I looked at the on-line directory of the American Historical Association, which lists about 25,000 historians in universities and historical agencies in the United States and Canada. The directory allows AHA members to designate up to three topical fields of interest, in addition to the particular country or time period they study. There are fifty possible subject choices, and one of them is religion. When I accessed the database last March, 918 historians said that they worked on religion. This number was second only to the 1,014 who said they did “cultural” history, but if you add in the 237 historians who indicated that they did “Jewish” history (most of whom did not also check “religion”), religion is in first place.


One could add the increasing number of blogs, journals, conferences, and symposiums dedicated to religion in America. On a related note, I hope in the coming days we'll get some reports on the Conference on Religion and American Culture that's winding down today in Indianapolis.  Where are we headed now?  What new avenues of research are scholars going down?  What can we expect in the coming years?
Email Post
Labels: American religions lectures OAH randall's posts