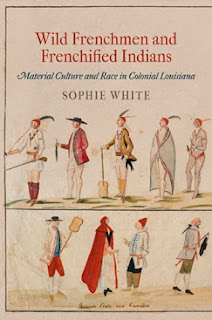 I wanted to bring to everyone's attention two new books on the history of (among other things) religion in New France. I say "among other things" because these are not books with "religion" in the title. The authors don't go out of their way (as I likely would) to tug all-things-religious out of the rich depths of colonial America. Rather, the religious beliefs and practices of natives and newcomers are on full display alongside other social, cultural, and economic factors in a manner that draws attention to religion without the theoretical acrobatics of religious studies. What can I say... It's refreshing. Sophie White's Wild Frenchmen and Frenchified Indians: Material Culture and Race in Colonial Louisiana (University of Pennsylvania Press 2012) examines perceptions of Indians in French colonial Louisiana and demonstrates that material culture--especially dress--was central to the elaboration of discourses about race.

Brett Rushforth's Bonds of Alliance: Indigenous and Atlantic Slaveries in New France (University of North Carolina Press 2012) is about how French colonists and their native allies participated in a slave trade that spanned half of North America, carrying thousands of Native Americans into bondage in the Great Lakes, Canada, and the Caribbean.

In both books, White and Rushforth draw extensively from sacramental records and missionary observations to describe the intersection of Indian and European moralities in a highly volatile colonial world. Read alongside more critical reflections of religion in New France--I'm thinking of Tracy Leavelle's Catholic Calumet--and you've got yourself a party!