An Interview with Yaakov Ariel: the "Unusual Relationship" between Evangelical Christians and Jews

I am pleased to publish this interview with Yaakov Ariel, Professor of Religious Studies at the University of North Carolina at Chapel Hill, concerning his new book released just this week: An Unusual Relationship: Evangelical Christians and Jews (NYU Press). Yaakov is the author of numerous articles on a wide range of topics regarding Judaism in America and beyond, Jewish-Christian relations, and evangelical Christianity and its attitudes towards the Jewish people and the Holy Land. His previous book, Evangelizing the Chosen People: Missions to the Jews in America, 1880-2000, was awarded the Albert C. Outler Prize by the American Society of Church History.

In addition to his outstanding scholarship, Yaakov is also an acclaimed teacher and outstanding graduate advisor. I was fortunate to have him as my mentor and dissertation director while at UNC--and thus I am especially pleased to highlight his new book.

1. What led you to write An Unusual Relationship--and how is this book related to your previous work in Evangelizing the Chosen People?

The unusual relationship between evangelicals and Jews has fascinated me for a long time.  Throughout the years I have researched various aspects of the topic, but the new book goes a few steps further.  It tries to offer an overarching historical analysis of a long and complicated interaction between the evangelical and Jewish communities.

2. What types of sources did you draw upon in examining evangelical-Jewish relations?  For example, you have an entire chapter examining Yiddish evangelical literature distributed by Christian missionaries in Jewish neighborhoods throughout the 19th and 20th centuries.

The sources detail and record the relations of evangelicals and Jews, and are therefore varied and rich.  They include theological tracts, sermons, biblical exegeses, articles in evangelical and Jewish journals, newspaper clippings, and archival material, which consist mainly of correspondence between activists.  It also makes use of plays, novels, and poems, as well as memoirs and autobiographies. Working with all these sources was overwhelming at times, but on the whole a pleasure. 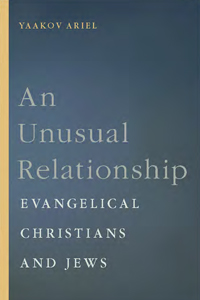 3. You argue that the relationship between evangelicals and Jews has elements resembling a "marriage of convenience," but it has also "become affectionate throughout the years" and provided both groups with "mutual rewards" that "perhaps explain their continued and persistent fascination with each other." Can you explain this dynamic more?

Evangelicals and Jews first encountered each other and cooperated on mutual causes, without being truly familiar with each other’s cultures and agendas.  In spite of prejudices and suspicions, they have offered each other encouragement and support. Some elements of the older attitudes still persist, but throughout the years both sides have improved their opinions of each other and have come to appreciate each other for what they are and not only for their instrumentality and the practical benefits they bring with them.  There is also a vibrant community of evangelical Jews, which, while unacceptable to many Jews and Christians, is a borderline culture and faith that combines elements of both traditions.

4. What most surprised you in the course of researching and writing this book?

I was both taken and surprised by the multiple dimensions of the relationship.  Offering political support to Zionism and Israel is but one aspect of the long and resourceful attempts on the part of evangelical Christians to be involved in and influence the lives of the Jews.

5. What is the most important contribution this book will make to our broader understanding of religion in America?

It points to complex and creative interactions between religious communities in America and beyond, and to borderline traditions that these exchanges have created.  It also helps bring to the forefront aspects of Jewish and evangelical history and culture that have not always been known and appreciated.
Email Post
Labels: author interviews books brantley's posts evangelicalism Israel Jewish new books

Transient and Permanent said…
Glad to hear about the new book. Brantley doesn't mention it here, but Yaakov Ariel is also one of the nicest men you'll ever meet.
June 26, 2013 at 1:01 PM