The Religious History of Morality Activism is Making a Comeback 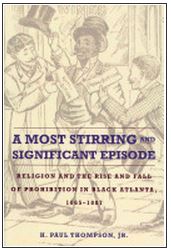 I'm not the only one to observe that recent debates over marriage equality bear some similarity to nineteenth century debates over prohibition. Each involve a well-funded and well-connected group of Protestants with a conviction about how making something illegal would make an important social statement, even if it will not end the practice entirely. Both prohibitionists and defenders of "traditional marriage" have claimed that their mission ultimately protects children from the transgressions of adults. Both movements have involved a large number of moderates who have suggested that the act under question may or may not be morally questionable, but they do not think it should be illegal. For these and many more reasons, research on religious  provocations for temperance and prohibition (and morality activism more broadly) is making a comeback.

Studies on the subject have come a long way. Richard Jensen's classic, The Winning of the Midwest (1971), used extensive demographic and voting data on the Midwest to examine how and why voting behavior split on the subjects of temperance and prohibition. He concluded that there was a significant divide between what he called "pietists," those whose faith revolved around belief, and "liturgicals," those whose faith revolved around a liturgy. He found that pietists were much more likely public temperance advocates than liturgicals, even considering ethnic and national differences. I rarely hear of this distinction these days; I'm sure this dichotomy, like all dichotomies, has been rendered too simple.

Yet, in the 1970s and 1980s, social historians generally de-emphasized the religious provocations for temperance advocacy. Instead, they drew attention to the ways that critiques of the alcohol industry and the accusations of working class "dissipation" were about much more than Protestant evangelicals' personal faith commitment to temperance. Rather, advocates of temperance (and even moreso advocates of prohibition, in the 1910s) aimed to undermine Catholicism as a legitimate form of Christianity; to shut down immigrant and ethnic businesses, and to displace the saloon as a social center for working class activism and social life. In the Carter, Reagan, and Bush years, nineteenth century temperance advocates resembled the Christian Coalition. 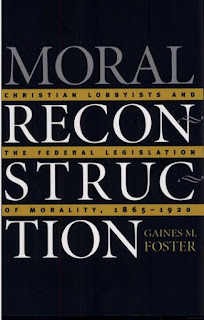 In the last decade or so, the scholarship has changed again. We now have a newer and growing body of literature which again takes Protestant faith seriously as a provocation for public morality campaigns in the late nineteenth and early twentieth centuries. One of my favorite books in this genre is Gaines Foster's Moral Reconstruction: Christian Lobbyists and the Federal Legislation of Morality, 1865-1920 (2007), a reflection on the united efforts of Protestant clerics and lobbyists after the Civil War to reconstruct American morals to reflect those of middle class Anglo Protestants in a plethora of ways. These initiatives for "Moral Reconstruction," as these lobbyists put it, included halting the spread of venereal diseases, gambling, lewd films and print materials, impropriety on the Sabbath, and among them, dissipation through alcohol. Foster shows how these religious lobbyists were interested in social engineering and social control to build a more Protestant and "moral" America, but he does not suggest that this was simply about the mistrust of the ethnic and working classes. Rather, reformers had a sense of responsibility to build a country which was, in their minds, better for all.

The current work on public morality campaigns in the late nineteenth century seems to weave together the last few decades of research on the subject. I just picked up brand new book on prohibition, H. Paul Thompson's A Most Stirring and Significant Episode: Religion and the Rise and Fall of Prohibition in Black Atlanta, 1865-1887 (2013). Thompson looks at the history of temperance and prohibition in Black Atlanta from the perspective of African American evangelicals. He proves that African Americans in postbellum Atlanta were not simply reformed and controlled by Northern evangelical temperance advocates or the Southern politicians eager to use them.

Rather, Thompson shows that the "better classes" of African Americans adopted temperance beliefs within the context of nineteenth century revivalism because abstention from alcohol "increased the likelihood of an individual's conversion." This temperance conviction was pragmatic: it made conversions to the faith easier and more sustained, and it seemed to offer an alliance between the growing African American middle classes and the Anglo Protestant reformers of the 1880s. In "the most stirring and significant episode" of 1885, Black Atlantans actually voted in favor of temperance legislation in large numbers. They learned quickly, however, that what seemed like an alliance had no terms of equality at all. Just two years later, in 1887, Black Atlantans voted against prohibition in a vote against white supremacy and infantalization as needy of reform.

As Thompson teaches us, temperance in the Black Atlanta community was not entirely about social control-- to the church-going "better classes," it was also about cultivating a grassroots Christian revival revolving around social reform, personal respect, and community uplift. Yet, the Southern white prohibition movement was to a large degree about white supremacy and about social control. When prohibition came to the state of Georgia twenty years later, it was not passed by plebiscite (by a vote on the local level). It became state law, and white prohibitionists and anti-prohibitionists had layed aside their differences and disfranchised African Americans of all classes.

Thompson suggests that the momentary and widespread African American support for prohibition reveals a great deal about the history of social reform and public morality legislation more broadly. Not only did Atlanta African Americans of the "better classes" hold out hope for building reform alliances with whites, but working class African Americans were also influenced by the white Northern evangelical culture of freedmen's aid societies and other institutions dedicated to uplift. Thompson suggests that race relations when African American freedpeople were briefly enfranchised did not lead to the "unstable interlude" described by C. Vann Woodward, but to a moment of trust in middle class reformers and electoral politics, despite the demeaning racial etiquette of the day. Was the control of the African American "better classes" over the working classes in the South another form of social control? A good number of scholars have addressed this, especially Evelyn Higginbotham, Glenda Gilmore, and Michelle Mitchell. What we do know is that working class African Americans voted for prohibition in 1885, and not under evident compulsion. Further studies of prohibition and vice legislation are under way.

It seems to me that the religious history of prohibition and other morality activism is back, but we're much more sophisticated in how we approach it these days. Now we know that in the late nineteenth century, religious convictions were on all sides of the public debates, and so also are people of color. Class mattered, as the "better classes" always had much more time and resources to curtail vice than the working classes. But, the new studies are continuing to surprise us, as they show how working people and people of color were more pragmatic than ideological about how they addressed each of these campaigns, and they changed sides as the debates changed shape. Most of all, we're seeing more social historians of ideas--folks doing community studies alongside studies of  rhetoric. We are beginning to have a vantage point to recognize see rhetoric within a very rich local historical context. We have a lot to look forward to.
Email Post
Labels: janine's posts prohibition religion and social reform religion in contemporary america vice legislation

Mark T. Edwards said…
Thanks so much for the introduction to this subject and these intriguing books, Janine.

I couldn't help but think of David Sehat's Myth of American Religious Freedom as I read your post, especially the Moral Reconstruction book. I'm not sure if you're familiar with Sehat, but I'm wondering where his idea of a "Moral Establishment" would fit in with this literature. It seems to Sehat that the long history of Protestant morality activism was about controlling race and gender more so than class.
May 9, 2013 at 12:50 PM

Janine Giordano Drake said…
I haven't read Sehat's book yet, but it's been on my list for a while! Thanks for the encouragement to finally get to it. In my own research, Protestant morality activism in this period has a lot to do with class, so this sounds like something I should have read by now. Thanks for the comment!
May 9, 2013 at 8:32 PM

Tom Van Dyke said…
FTR, Janine, there would be a difference in political theology [or Burkean political philosophy] between banning that which is already legal--booze--and innovating a new morality and instituting a new societal convention, creating same-sex marriage.

"Marriage equality" begs the question of whether all sexualities are created equal, and so is unhelpful in this context.

They cannot be lumped.

Tom Van Dyke said…
Well, Richard, you could drag my argument into the tall weeds and try to gum it to death, but yeah, the point holds. Prohibition and gay marriage are moral/legal innovations, not prevailing norms. This is not to judge their merits, but they are radical, not conservative in the Burkean sense.
May 11, 2013 at 6:00 PM

Janine Giordano Drake said…
I'm not even saying that the two are equivalent in any sense, just that they evoke a similar dialogue about "traditional American values" within American culture.

Maybe I should review this book on the blog sometime soon. Engs explores the many different American cultures of alcohol use in the nineteenth and twentieth centuries.
http://www.amazon.com/Clean-Living-Movements-American-Cycles/dp/027597541X/ref=sr_1_1?ie=UTF8&qid=1368334317&sr=8-1&keywords=Ruth+Engs+clean+living+movements

Tom Van Dyke said…
Oh, Janine, I was speaking of social reengineering per political philosophy. And a quick look at the "clean living" book's capsule looks like it's all over the map, from religion to women's movements to eugenics. I suppose one could posit a common thread but it seems like a strain.

I say give this one to Godwin and the vegetarian teetotler and militant anti-smoking advocate Adolf Hitler and call it a day.