The Esoteric Harmony between Religion and Science

One of the general areas of interest I have is the intersection of religion and science. It is one of the reasons I have focused so much on the American religious traditions emerging in the mid-nineteenth century and leading in the early twentieth. During this time period, the boundaries were porous and claims fantastic. This is also one of the reasons why I study Theosophy, because from its beginning it has had an ambiguous relationship with both religion and science. Frequently members of the society would suggest that particular scientific discoveries would prove this or that esoteric claim made by members. Yet, should science not support their claims, they are quick to dismiss science as limited in its scope or abilities. For instance, in reading about Theosophical ideas about the human body, one author was quick to invoke scientific discoveries to validate part of his claims, but when science did not validate the other part, he is quick to add, “Nor does it much more concern us that the Scientists deny the existence of such an arrangement, because their instruments are inadequate to make their senses perceive it. We will simply reply—‘get better instruments and keener senses, and eventually you will.’” 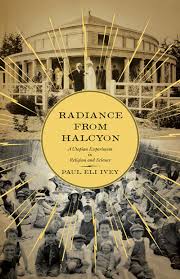 It was with this interest in the rhetorical deployment of science that I recently began to read Paul Eli Ivey’s Radiance from Halcyon: A Utopian Experiment in Religion and Science (University of Minnesota Press, 2013). The book is about The Temple of the People, a Theosophical schism group that began in Syracuse, NY, but eventually relocated to Halcyon, CA, to establish a Theosophical community. One of the core tenants is that religion and science are mutually supporting and ultimately prove each other. The Temple’s members were often educated scientists who frequently made new discoveries. Ivey writes that in part, “this book also tells an alternative story of scientific advancement that suggests that the context for discovery in science are not always based in the traditional rationalist and empiricist scientific method” (8). Temple members saw the emergence of X-rays and infrared and ultraviolet light as indications that science was beginning to access the occult aspects of nature, aspects that Theosophy had been advocating for decades.

Those familiar with this time frame will probably recognize that the same rhetoric was used in Spiritualism. Even from its beginning, Spiritualist mediums attempted to use the rhetoric of science to prove life after dead. Elaborate and controlled experiments were concocted to test Spiritualist claims. Usually they proved little. However, this rhetorical style was adopted by Theosophists and thus the Temple too. However, unlike Blavatsky or Olcott who spoke directly with master they claimed, the Temple’s link to the Masters, a woman who went by the name of Blue Star, spoke with the Master Hilarion through trance, similar to Spiritualism. According to Blue Star, he communicated with her through a kind of electrical connection, and thus invoked the metaphor of a telegraph, again something Spiritualists picked up early in the movement.

The Temple still exists today and is still in the little town of Halcyon. They still publish their periodical, the Temple Artisan, and they still speak of religion and science. So does the Theosophical Society. This is not surprising because still today, science and its pronouncements are the strongest legitimizer of claims. Scientific rhetoric aside, Ivey’s book is excellent. His writing style is quite readable and it is clear that he is familiar with the literature in American religious movements, new religious movements and western esotericism. It might also be a good choice for students because their form of syncretism is so American with its inclusion of Theosophy, Spiritualism, Liberal Christianity, and millennialism. Ivey really captures the expectation of the members that the times are changing and they are on the cusp of it. Definitely a book worth checking out.